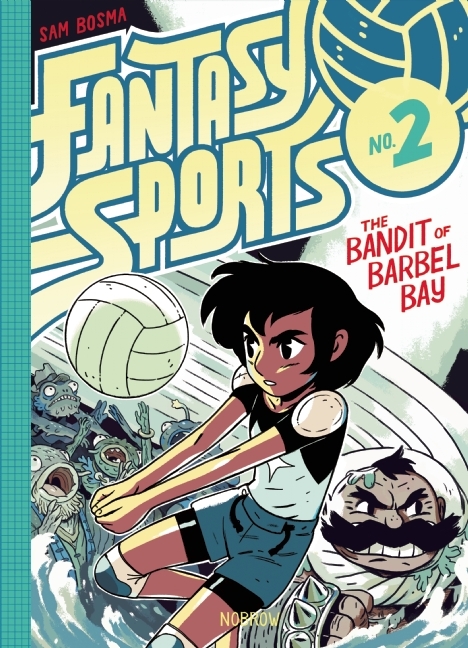 Sam Bosma announced on Twitter last Thursday the news of a follow-up book to Fantasy Sports, his very well-received and irrepressibly fun quest-adventure comic, published earlier this year by Nobrow. Bosma's Fantasy Sports originally began life as a black-and-white, self-published work, titled Fantasy Basketball, so when Nobrow picked it up and released a full-colour, large-format, expanded hardback edition as Fantasy Sports 1, the numeration was obviously a sign of intent for what is shaping up to be a series of books. This second book, Fantasy Sports 2: The Bandit of Barbel Bay, will continue the story of unlikely partners Wiz and Mug, in Spring 2016, as the duo return in a new adventure which promises to reveal more about Wiz and her background (an origin possibly involving a baseball diamond), as they seek to uncover mysterious secrets while taking in some sun and sand:

'Wiz and Mug’s adventures continue when a misunderstood teleportation spell accidentally drops them off in a ruined beach town. When the town’s amphibious inhabitants confront Wiz and Mug with the revelation that the United Order of Mages may not be exactly what it seems, a new, beach volleyball tournament begins!'

Bosma's an incredibly skilled cartoonists and illustrator, so it's fantastic to see his work gain more visibility and recognition in this way. Having bought and read the original self-published iteration of the first comic, I was surprised by how much I enjoyed the new Nobrow edition, and by how different it felt. Much of that was due to the larger format: being able to see and appreciate the detail of Bosma's art, and the extra dimension provided by experiencing it in colour. As excellent as his black and white art is, Bosma has a superb sense of colour, which adds a whole other dimension to a book like Fantasy Sports, going quite a way to adding to its dynamism and lively tone. That much is evident from the cover art for the new book shown above; the blues and greens give it a real freshness, and the expressiveness on display is fantastic. It's an excellent cover. I'm really looking forward to this, and if you haven't caught the first book yet,  now's the time to get on board; it's a great amalgamation of magic, sports, mystery, and fun.
Posted by Zainab at 08:48