With pound in hand: October comic and graphic novel releases

Here we go- picking out the cream of this month's releases, in graphic novels, collected editions and anything else notable. 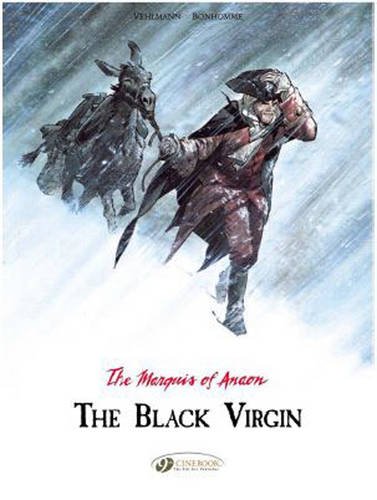 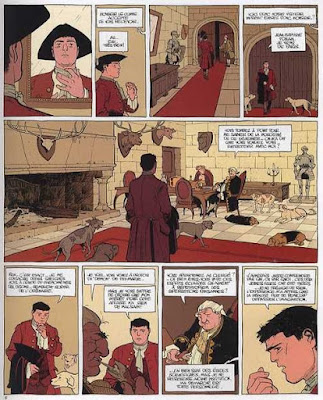 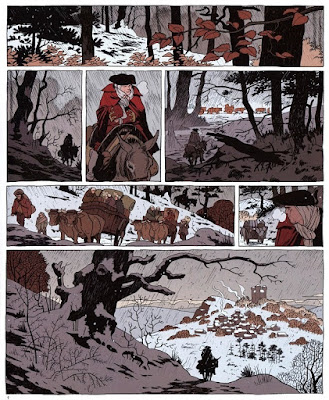 PICK OF THE MONTH: Marquis of Anaon 2; The Black Virgin by Matthie Bonhomme and Fabien Vehlmann, Cinebook: My final contribution to The AV Club's comics panel was a review of The Isle of Brac, the first book in Fabien Vehlmann's and Matthieu Bonhomme's 5-volume Marquis of Anaon series. Bonhomme's gorgeous art is the shining light here -beautifully shown off in the original album format/size- and worth the entry price alone. Vehlmann is no slouch though, and his stories of young  Jean-Baptiste Poulain who travels from place to place for to learn and experience and inevitably become embroiled in some problem, are solidly empathetic. In this second book, Jean-Baptiste arrives in central France to investigate the deaths of two young women. Both were killed a year apart in the same barbaric, ritual way, their bodies left near the Black Virgin Chapel. Once again, it's up to Jean-Baptiste to negotiate the high feelings and theories of various interested parties as he aims to get to the truth. Really looking forward to just sitting down and being immersed in the beauty of this once it's out. 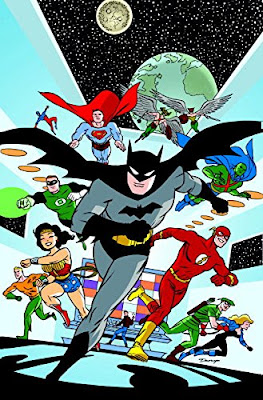 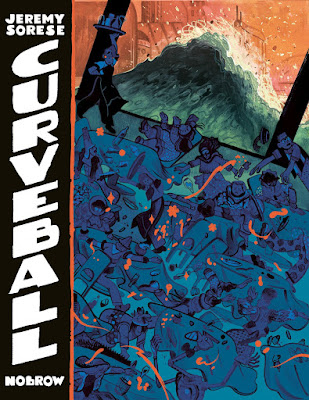 Curveball by Jeremy Sorese, Nobrow: Jeremy Sorese is of those cartoonists I'm aware of largely because they work in animation- in Sorese's case, Steven Universe, for which he also co-created the popular and very good comic book. I haven't read much of his original work, but from what I've seen of this new, mammoth, 420-page black and white book, it certainly looks the absolute business. I'm always interested to read books on the relationship between humans and robots, too (robot feelings do it for me), of which this is one. 'After years of technological advancement, the relationship between humans and robots is changing. In the midst of this turmoil, one woman faces her own breakdown at the hands of a manipulative friend. Jeremy Sorese explores how heartbreak can make us feel like the center of the universe and how the realization that we are not is often more painful than the heartbreak itself.'

Graphic Ink: Darwyn Cooke, DC: You may remember last June I wrote about DC's collection of Frank Quietly's work, which took me by surprise by being very good. The material collected was wide-ranging and worthwhile: comics that were hard to find or had otherwise gone out of print, his cover work, and so forth; the hardback was sturdy and nicely bound, and it was priced reasonably for what it was. This 400 page Darwyn Cooke collection is a continuation of that spotlight series, although there's little information on what's contained within. I'm a big fan of Cooke's art, and since DC have gained some goodwill with the Quietly collection, I'm going to trust them in producing something of similar high quality here. I think it's unlikely it'll include The New Frontier, but perhaps Batman: Ego will be in there as a shorter story. Hopefully none of the Before Watchmen stuff. I'd really love if they collected all those landscape variant covers he did for them -they were stunning and would be quite something to see in this oversized format. 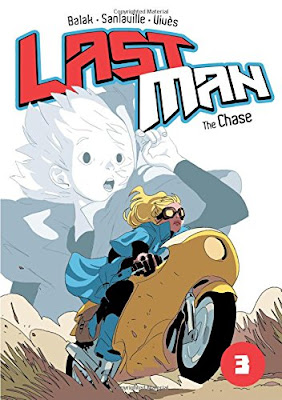 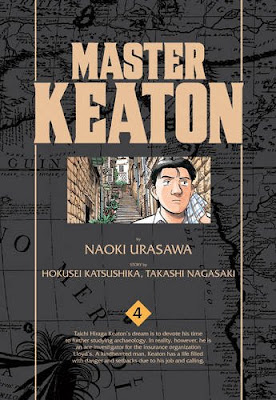 Last Man 3 The Chase by Bastien Vives, Michael Sanlaville, Balak, First Second: The third book of the hugely enjoyable Last Man comics releases this month. Volume 2 ended on a bit of a cliffhanger after the end of the fighting tournament, and it seems like this may be the installment that provides readers with some answers in terms of what's going on regards to time and setting and the smushing of modern and archaic worlds. The Chase promises to focus more on Adrian and his mother Marianne as the story moves beyond the haven of the Valley of the Kings for the first time: 'Magic and mysteries and some super-strange people await them as they set off on their latest adventure.' Expect thrills, topsy-turviness, and some of the most stunningly dynamic and fluid art you'll see.

Master Keaton 4 by Naoki Urasawa, Hokusei Katsushika, and Takashi Nagasaki, Viz: Every time I write or discuss Master Keaton, I reassess my feelings towards it. Keaton is the monolithic 'good man' that you'll see frequently in Urasawa's work: an archaeology professor, a gifted insurance investigator, a former SAS man, but what I like about this series is it's ostensibly about people and human nature. Keaton's sideline investigations and training make him the ideal vessel for these people and stories to filter through, and even though they can feel a bit on the nose, they're still emotionally resonant (I mean; I cried). Book 4 sees the return of Keaton's delightful dad in one story, as he moves into a building where all the tenants blame themselves for one of the residents suicide. Just a really affirming and good comic, cartooned to great levels by Urasawa. 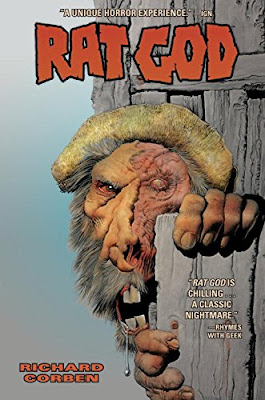 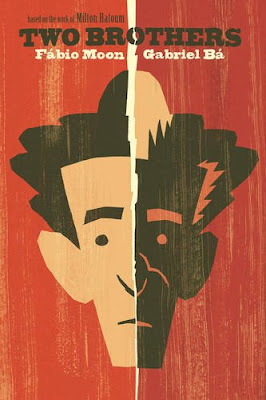 Two Brothers by Fabio Moon and Gabriel Ba, Dark Horse: Fabio Moon and Gabriel Ba return with Two Brothers, an adaption of  a work by acclaimed novelist Milton Hatoum. I'm not generally sold on book to comic adaptations -particularly where the label of 'literary' is involved, but Moon and Ba do interesting work so this is worth a look at least. 'Twin brothers Omar and Yaqub may share the same features, but they could not be more different. And the possessive love of their mother, Zana, stirs the troubled waters between them even more. After a brutally violent exchange between the young boys, Yaqub, 'the good son,' is sent from his home in Brazil to live with relatives in Lebanon, only to return five years later as a virtual stranger to the parents who bore him, his tensions with Omar unchanged. Family secrets engage the reader in this profoundly resonant story about identity, love, loss, deception, and the dissolution of blood ties.'

Rat God by Richard Corben, published by Dark Horse: The trade paperback collection of Richard Corben's Rat God mini-series, which I've been waiting for. Look at that grotesque face on the cover! Corben is the master of combining flesh-crawling horror with a squirmy realism even his people look ripe and 'off.' You know terrible things are afoot before being shown a monster of any kind. Lovecraft bores me, but since this is Corben, I hope that's minimal in overt involvement, and that the comic's as good as some of his other shorter books. 'Terrible things stalk the forests outside Arkham in this chilling original tale from comics master Richard Corben! An arrogant city slicker on a quest to uncover the background of a young woman from the backwoods finds horrors beyond imagining, combining Lovecraftian mutations with Native American legends.' 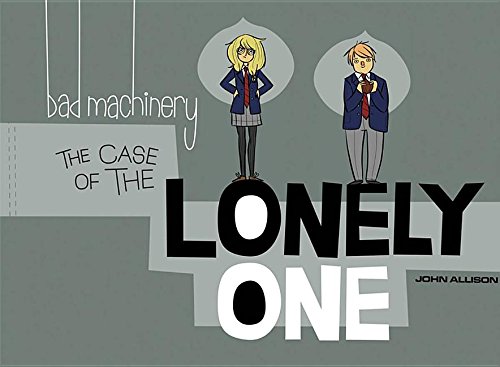 Bad Machinery 4: The Case of the Lonely One by John Allison, Oni Press:  It's curious how often John Allison is overlooked as one of contemporary cartoonings excellent practitioners. Perhaps it's because his work and style is deemed youth-orientated, or because he works online (the double knell of snobbery in comics), or that consistency is undervalued over the search for fresh new things. But there are few cartoonists who have developed such a unified and cohesive language and world, from dialogue to expression to tone and colour and line. And he gets better, as is apparent to anyone who has been following his comics for a while. This makes the print editions of Bad Machinery indispensable, and now we're on book 4, we're getting to some of the real, good, oniony stuff. 'A new school year brings a new classmate to Griswald's Grammar School! But he's a bit strange, and he really, really likes onions. When the whole school suddenly becomes best friends with him, Shauna seems to be the only one left out. It's up to her to peel back the mystery, one onion layer at a time.'