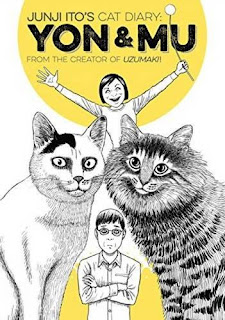 Junji Ito returns with his second book this year, but it's not quite what we've come to expect from the master of bizarre and pervasively creepy horror. This is a diary comic of sorts, following Ito as he buys a new home and asks his fiancee, A-ko (Ayako Ishiguro), to move in with him. Even as Ito is admiring the smell and sheen of his fine residence, he's soon having to contend with arrival of not one, but two cats: Yon, an older cat belonging to A-ko's parents that she's bringing with her; and Mu, a kitten adopted to provide Yon with some companionship. The comics here are quasi-fictional chronicles of Ito's adjustment and relationship with the cats, though Ito being Ito, events are depicted with an exaggeratedly horrific, played-for-laughs overture.

Ito's tradition for placing men as the complacent carriers of horror continues in a different vein here: rather than the cats, he places himself as the object of weird compulsions and strange behaviour. He's the one who experiences swinging extremities in emotion, at first irrationally afraid and suspicious, and then overly desperate and eager for the cats to like him; deriving uncomfortable gratification when they display any affection. A-ko, meanwhile, is calm and assured; a natural, capable of doing everything off the bat- almost magically so, in a nod to another Ito theme in which women are more inherently spiritually/supernaturally connected. There's disturbing images aplenty to take your pick from: Ito making as if to unhinge his jaws and eat a cat -gripped by the fervour of its cuteness- and then rabidly descending on it in a tickle attack. Ito and A-ko moving like whirling dervishes: a mad flurry of ritualistic summoning as they dance with the 'cat wand.'  Yon by turn shape-shifting into a gigantic slug, an ominous monk, a snake. And then you have the downright disturbing, such as when Ito finally gets Yon to succumb and suckle his finger in a close-up, multi-panel sequence mimicking fellatio.

The world (and internet) is no stranger to cats or cat comics, but Ito switches focus onto cat owners: the ascription of behaviour as either cute, or grumpy, or aloof -whatever personality a cat may have filtered and amplified by humans- the perspective dependent on the lens. People seeing what they want to see, or interpreting at will and with license. It's a framing that's starkly apparent (and wryly meta) here: Yon and Mu appearing unperturbed and laissez faire throughout, while Ito jumps through hoops and moves dementedly from narrative to narrative of his own creation. He turns the fawning, awkward-relationship-with-my-cat trope on it's head, and gives the reader his own unique anti-thesis of it. The melding of the horror and humour elements is largely handled well, but their dominance means it's a struggle for the more real, affectionate portrayal to shine through: the book also contains 2 pages of photo-collages of both Yon and Mu, a closing tribute essay by A-ko, and extra comics, so it's clearly something he wishes to convey.


In the context of Ito's oeuvre, Cat Diary is somewhat of a departure, a comedy- lighter fare (although he began his career as a gag strip cartoonist). To the uninitiated Ito-reader, the visceral horror elements may well be startling, and present a fresh approach, but to the Ito-seasoned, seeing them repackaged here in a cursorily enjoyable work that feels middle-of-the-road to forgettable is disappointing.  Cat Diary, and the stories collected in Fragments of Horror give rise to the question of whether Ito's powers -and/or interest- are on the wane. Mining a specific area because it continues to work for you isn't contentious when what's being produced is good (many artists pursue, explore, and hone certain ideas and themes within their work), and when you push the bar as high as Ito has, it's easy to overlook. The evidence of these latest translated efforts, however, suggest a degree of predictability and weariness is beginning to settle in. 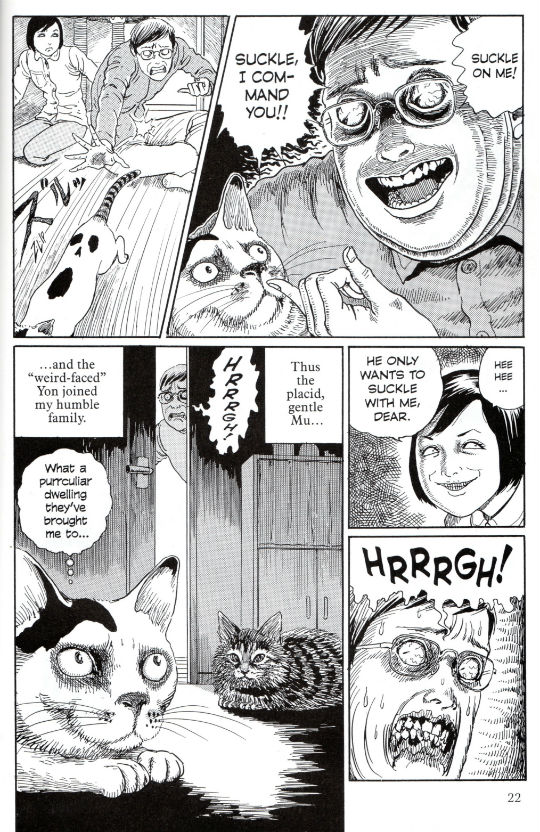 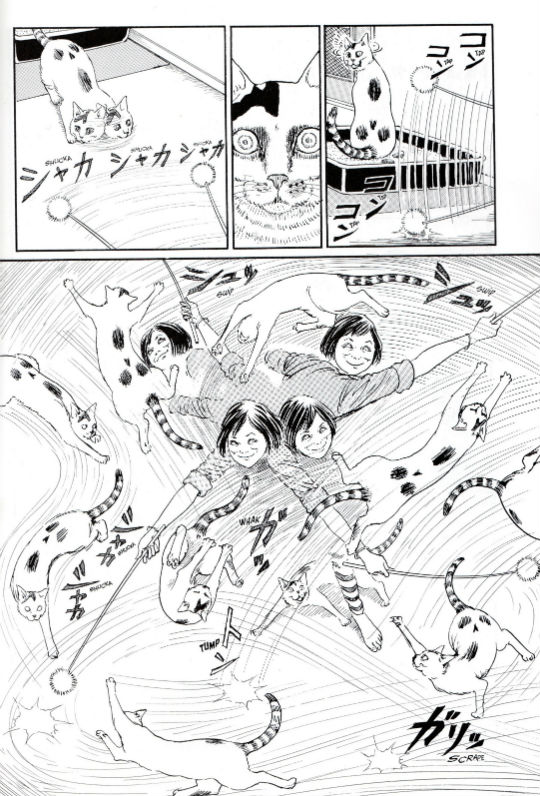