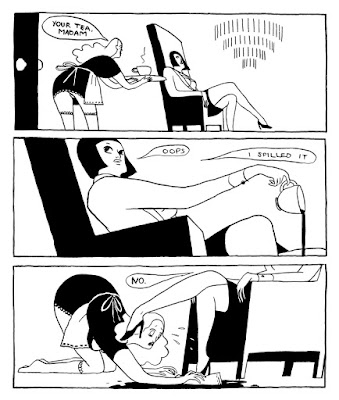 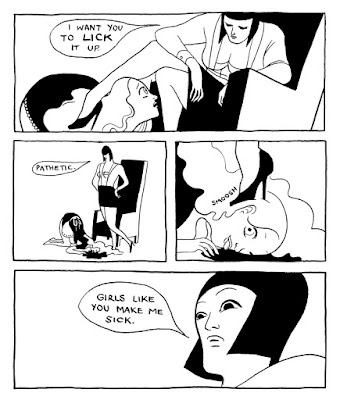 Youth in Decline have revealed the four cartoonists making up their Frontier line-up for 2016. Listed in order of scheduled release, they are:

Launched in 2013 from Ryan Sands, the Frontier series provides artists with a showcase for their comics or illustrations via the dedicated monograph platform. To date, it's featured some of the finest contemporary artists working in the comics and illustration fields today, including  Hellen Jo, Emily Carroll, Jillian Tamaki, Sam Alden, Becca Tobin, Michael DeForge, and more. The series is notable for its curation (via Sands) and the distinctly modern feel and outlook of both that, and the work contained within. My personal highlights have been Hellen Jo's ridiculously good collection of girl gang paintings, and Jillian Tamaki's Sex Coven; an internet mythology from earlier this year. I appreciate, too, how the books are the focus of the Youth in Decline imprint in a streamlined way, with a direct and effective marketing approach and little need for anything else.

It seems the line-up for Frontier gets stronger with each passing announcement; the pages above are excerpted from the first book due for release, Davis' adult-only comic, titled BDSM. It looks like that may see Davis continue her fun and affirming sex comics after her mini, Fuck Wizards, and several related illustrations. I'm especially pleased to see Richie Pope will be creating a new, full colour comic; his work is so thoughtful and considered in a way that feels organic and sophisticated. I wrote about him being one of my artistic highlights in 2014: 'It's always gratifying to come across work that is quite distinctive in style and positively so- not only does it set the artist apart, but the reader feels as if they're getting something new from the experience. In that vein, Pope's style feels at once timeless and fresh.' I hope this book will sic more people on to his talent. Kelly Kwang's name is new to me, but a visit of her Tumblr will most likely get people quickly on board. Rebecca Sugar is, of course, the creator of the hugely popular Steven Universe cartoon show; it's been a while since she's done a comic, and I imagine there'll be a lot of interest surrounding her return to the medium.

Youth in Decline will be running their annual subscription drive from Nov 23 - Jan 10, that offers people the opportunity to buy the bundle of all four books at a discounted price, in addition to receiving subscription-only extras such as stickers, patches and so forth. Otherwise all books will be listed online closer to their allocated release dates, and available to purchase in person at whichever show they're due to debut at.