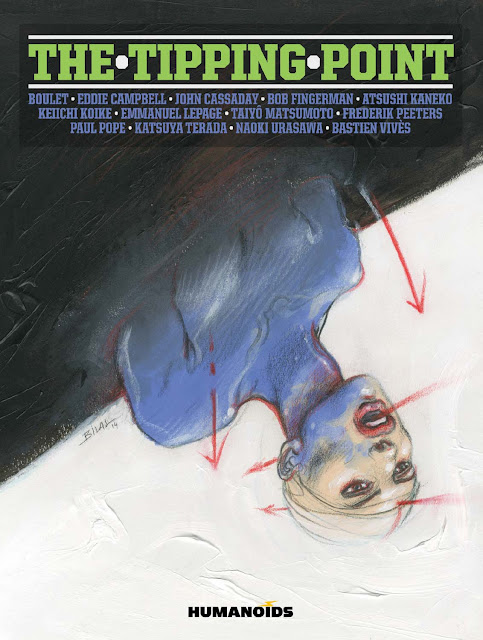 Humanoids have announced details of an upcoming comics anthology that brings together an indisputably excellent line-up of international comics talent. The Tipping Point will be published simultaneously in Japan, France, the UK, and the US, and features new work from Naoki Urasawa, Taiyo Matsumoto, Boulet, Bastien Vivès, Frederik Peeters, Paul Pope, Katsuya Terada, Eddie Campbell, John Cassaday, Bob Fingerman, Atsushi Kaneko, Keiichi Koike, and Emmanuel Lepage, with a cover by Enki Bilal. It's title is elicited from the thematic brief presented to each author: 'to explore the key moment when a clear-cut split occurs, a mutation, a personal revolt or a large-scale revolution that tips us from one world into another, from one life to an entirely new one: the tipping point.' The stories range from slice-of-life,science-fiction, adventure, amusing asides and fantastical fables, and promise to be 'humorous, moving, perplexing, horrifying, pensive, uplifting, and hopeful.'

The official press release has Humanoids' publisher, Fabrice Giger commenting, "Humanoids, since its very inception 40 years ago, has always had a leitmotif of building bridges between American comic books, Japanese manga, and European bande dessinée to help them inspire each other—or better yet, to cross-pollinate. The Tipping Point does just that, and features some of the medium's best creators working today. It's a very unique and special book that will land—like a shimmering UFO invasion—simultaneously in different languages around the planet, unifying global fans of the sequential art form."

Humanoids have quietly been working on digital distribution and translation (a number of their titles are listed on Amazon in Japanese language, digital formats) via the launch of their digital app earlier this year, and this book looks to continue that reaching out to audiences around the worlds major comics markets. Whilst I'm thrilled at the prospect of reading new, full-colour work from so many of my favourite artists -Naoki Uraswa! Taiyo Matsumoto! Bastien Vives!- and the prospect of this book leading people to discover work beyond what they might normally read, in this day and age, there is no excuse for putting together an anthology that purports to collate 'some of the medium's best creators working today' and for it to be an all-male list. Discount arguments of quotas and merit: there is no shortage of excellent female cartoonists *in the world* and to not include a single one in a project that aims to showcase and cross-pollinate (and one titled The Tipping Point!) reflects very poorly indeed.

The Tipping Point is due for publication in January 2016.