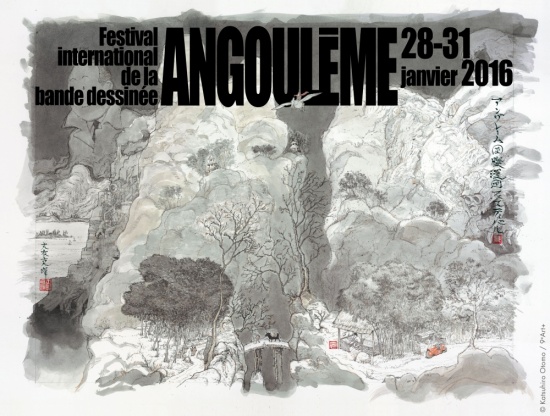 Katsuhiro Otomo became the first Japanese author to be awarded the Grand Prix prize at French comics festival, Angouleme, earlier this year. The award, bestowed to an author for a body of work, functions as a life-time achievement/hall of fame prize of sorts, but is unique in that the winner is given duties of president for next year's festival, in addition to their work being the subject of a large exhibition. In addition, where the winner is an artist and cartoonist -and not solely a writer- they are also requested to produce artwork for the official festival poster; you may recall Bill Watterson designed this comic strip effort for the 2015 festival after wining the Grand Prix in 2014, although he did not attend the festival itself. Today sees the revealing of Otomo's poster (pictured above), a watercolor piece evoking classical Chinese paintings and dotted with comic iconography: a mountainous Tintin, Moebius' Arzach soaring on high, the immediately recognisable red splash of Kaneda's motorbike, and more.

Most noteworthy is the news that Otomo will also deliver a 2-hour long talk discussing the development and creation of Akira, his work, and influences, in what will no doubt be a highly anticipated event.  French publishers Glénat, in partnership with Angouleme, are organising an exhibition in tribute to Otomo; tapping 40 international cartoonists to create original art inspired by the author an his work; and publishing a special exhibition book/album collecting all the tribute contributions. Whilst the tribute exhibition sounds nice (and the Angouleme website suggests more news yet to be announced), it would be fantastic to see a show -even one of a small size- of Otomo's own work, as a more rigorous, visible celebration for both his achievement and all those attending (the opportunity to see what makes him so good in a dedicated way) - although that's no doubt dependent on the status of his originals and negotiations surrounding their travel and display.