Snapshot thoughts: Holding together the Kingpin's humanity in patterned waistcoats 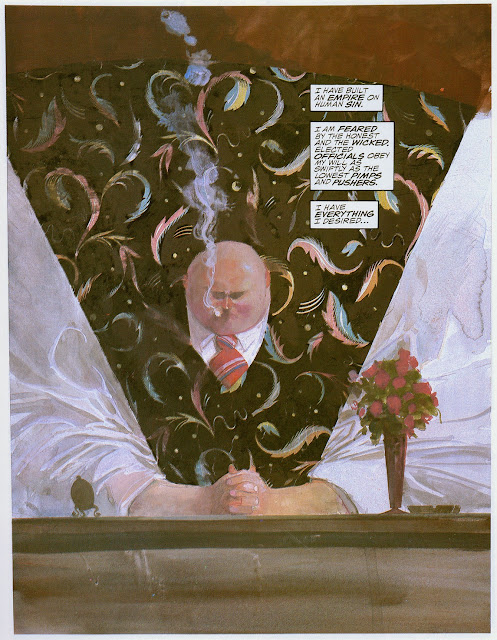 Published in 1986, Frank Miller's and Bill Sienkiewicz's Daredevil: Love and War is an often overlooked dissection of male pathology and power in superhero comics- most specifically with regards to the roles and treatment of women. Vanessa Fisk, wife of Kingpin Wilson Fisk, lies comatose, having suffered a psychological break that leaves her unable to speak. Having exhausted a variety of medical avenues, a desperate Kingpin orders the kidnapping of Cheryl Mondat, wife of prominent, specialist psychologist, Dr. Mondat, using her capture as the incentive in his forced treatment of Vanessa. Kristian Williams penned an illuminating essay on the book and its central themes last year, and that's not ground I wish to retread. Instead, this piece aims to examine Love and War in its function as a fundamental character study of the Kingpin as a sympathetic figure, and the manner in which Sienkiewicz uses the extremity of his size in tandem with his sartorial choices to bring about this distinctive portrayal.

Clothes are regularly used as markers of personality, and a facet of identification. Clothes can be an extension of culture, of function, an expression of self (even in choosing not to), a response to external conditions such as weather, or occasion; a way of marking out position and responsibility. In superhero comics, this is enforced via the notion of costume. Villains and heroes are given costumes that denote their respective traits, the familiar repetition of which aligns suggested ideologies in the reader's mind, whilst also making them easy to pick out on the page. This usage of costume -as ostensibly a uniform -presents a delineation and safety in roles. The rules and utilisation of these psychologies and implications shifts from world to world. In Superman, the Man of Steel is clad in bright, clean primary colours: a bold blue and red. Solid, unambiguous colours: a beacon combination that can be seen from far, that has nothing to hide. Superman's main antagonist, Lex Luthor, is generally clad in suits of black, or sometimes green and purple. The green reflects the inherently jealous nature of his relationship with Superman, who he views as a usurper of his rightful 'favourite son' position, and the purple his delusions of regality and grandeur. When Luthor wears a black suit, we recognise him as representing the homogenised, relentless nature of a very human evil: the corrupt, corporate, capitalist kind.

As a basic cultural construct, suits are inherently establishment: symbolic of authority and respectability (the earliest iteration of the formal suit was introduced by King Charles II as a uniform for men of the English court). The status of the suit has morphed from aspirational item, the donning of which would lead to the attainment of a desirable social standing via job, home, car, etc.; to a more ambiguous -and negative- icon of imposed homogenisation and repressed individuality, equated to a an idealistic and literal selling out. It's not the objectives themselves that have fallen out of favour over the years, but a questioning of the game: the methods, the system, 'the man.' From natty dressing in con capers, to the ubiquitous black-suited hoarde in a martial arts movie, the suit today reflects a colour-wheel of criminal activity, from embezzlement, to murder, and everything in between. On an intrinsic level, a suit is suspicious; it hides true intent and meaning, even as it purports to convey it. To a more simplified degree, a suit serves as shorthand for bad or evil. So it lends Luthor a sheen of credibility as a businessman whilst simulatenously rendering him dubious for being a cog of the quo (the irony of subversion). The suit, too, is a costume. Interestingly, Bruce Wayne is able to manipulate the the facade and associations of being 'just another suit' (much as Clark Kent does, albeit on a different, 'grunt' level) as the bland anonymity behind which he hides his Batman identity. He's passed over as shallow and stupid, a clueless trust-fund playboy, another in the mould of many. Wayne's real 'black suit,' the 'bat suit,' is altogether more individual and defining. 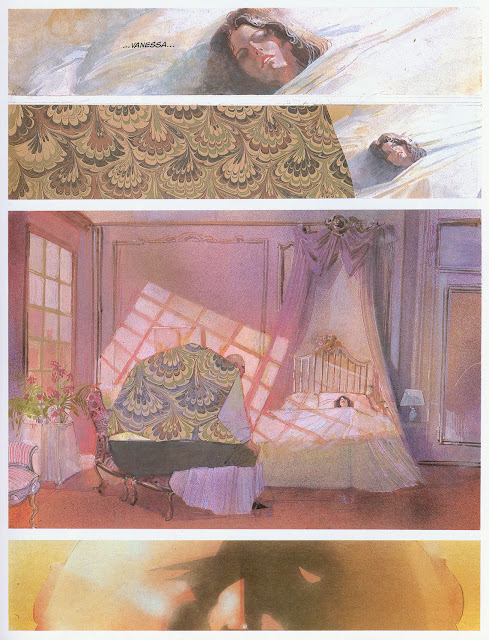 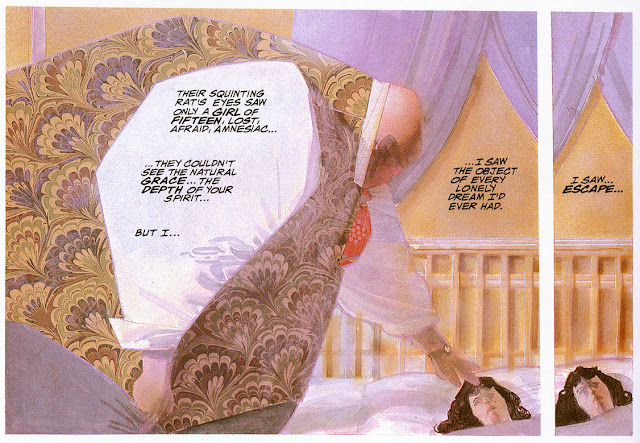 There are a few determining facets that mark the Kingpin as a 'bad guy.' He's bald,  huge in size, and wears suits -or formal attire. Both the absence of head hair as a malevolent signifier, and the aligning of fat as grotesque, speak to the distrust and fear of anyone beyond the confines of conventional standards of appearance. Fundamentally, his being bald and incredibly fat is used to induce repulsion and menace. At the same time, he's afforded a singular, undeniable physical presence. Sienkiewicz makes little attempt at realistic proportions with the Kingpin: his girth is vast, looming, and impossible; his head floating somewhere within his body like an afterthought, his face moon-like. His features are close and barely scrutable; brow, eyes, a nose and mouth. The smooth dome curvature of his head and body bring to mind a writ-to-life  Humpty Dumpty: both the widely reinforced egg personification, and the cannon to which the rhyme originally refers, are an apt fit. The Kingpin's size is a constant, overt reminder and manifestation of his power and threat, but here it is largely tempered by a sense of poise, and grace, almost. His posture and carriage are similarly held. At no point does he seems weighed down or hindered by his flesh. It bothers other people, and he is aware of this effect; acting as a mirror to their ugliness; using it to intimidate, impose. Before he does anything, seeing the Kingpin is enough; half the job done. Every fold of flesh makes him him, and the Kingpin knows this better than anyone.


For the vast majority of the story, Kingpin is shown seated. At Vanessa's bedside, at a desk, cross-legged on the floor. He's depicted in neutral repose: sat vigil, helpless; his arms in his lap, fingers laced. Head bowed. He stands to smooth Vanessa's hair and sits back down again. There are stretches where the reader is left with him, the prone, silent figure of Vanessa, and his internal monologue. He appears vulnerable; frustrated and angry at his wife's suffering and his inability to ease it. In these quiet passages in Vanessa's soft-hued bedroom, the eye is drawn to the focal point of visual interest: Kingpin's waistcoats. Throughout, his shirts are white, the trousers black, but the waistcoats are unique: brightly coloured and vividly patterned. Expected monotony is broken up by an implication of personal style that humanises him further. The patterns on his waistcoat aren't what would be considered fashionable or stylish in a contemporary sense: this is reinforced in a scene where the Kingpin's waistcoat throws down with a floridly-papered wall in a fight for the reader's attention. Both the wallpaper and the waistcoat emphasise a homely, familial aspect: the patterns are dad-ish, possibly chosen by Vanessa. In another sequence lilac curtains pick out the purple fan design on a waistcoast. He fits with the soft furnishings; this is where he belongs.

It's worth noting the association of  the terms 'pulled together' and 'put together.' 'Put together' refers to an outwardly presentable appearance: clean, tidy. The Kingpin is well put together, which indicates he's put some effort and consideration into what he's wearing. 'Pulling together' is an internal act: psychological; to clear and compose the mind. The Kingpin's suits denote the veneer of legitimacy encoded within his criminal/business empire, but the absence of a jacket show that that is not the capacity in which he's operating here. Here, his clothes work to hold and contain him. Emotionally, he is bereft, but he wakes up, selects his shirt, trousers, waistcoat, tie, a watch, and shoes and puts on each one by one. This is what he would do on a normal day were Vanessa not ill, and although it is not a normal day, it has the potential to be. There is solace in the ritual of assembly, an assembly of self; a proverbial buttoning up (again harking to a litany of pervasive Victorian sensibilities and respectability politics, as an extension of manners and psyche). It is a modicum of control in a mentally tumultuous landscape. 'I hope we showed that an immovable object could be reduced to rubble emotionally, internally by that from which his size affords no protection, ' said Sienkiewicz.


Kingpin's dress sense also serves to provide a contrast in character to the sure, unassailable red streak of Daredevil: the visual switch from one to the other is harsh. Daredevil's impulsive cock-sureness and general attitude is epitomised in his ineffectual 'rescue' of Cheryl Mondat, and subsequent reckless assault on Kingpin. He flips and bounds from one to the other, in a brash, too-pat display of heroism that renders him the interloper in Kingpin's story, ambivalent of his incongruousness. As Matt Murdock, his white, open-collar shirt suggests the type of unappealing naivete that crosses into ignorance. In a book where the women are pawns to be either saved or desired; where Daredevil repeatedly has to remind himself that Cheryl Mondat is 'a married woman' (as he imprisons her -fruitlessly- for her safety); in which Dr. Mondat views the woman suddenly under his care as his 'only weapon' - a tool to manipulate to ensure his own survival, it is the Kingpin who emerges as the person closest to possessing some degree of awareness and enlightenment, as he comes to the realisation that he has stretched Vanessa beyond her limits. He rages and grieves. But he understands. Amidst the expanse of marbled swirls and deco florals, Kingpin draws upon the vestiges of humanity; of love, and selflessness, and he lets Vanessa go. 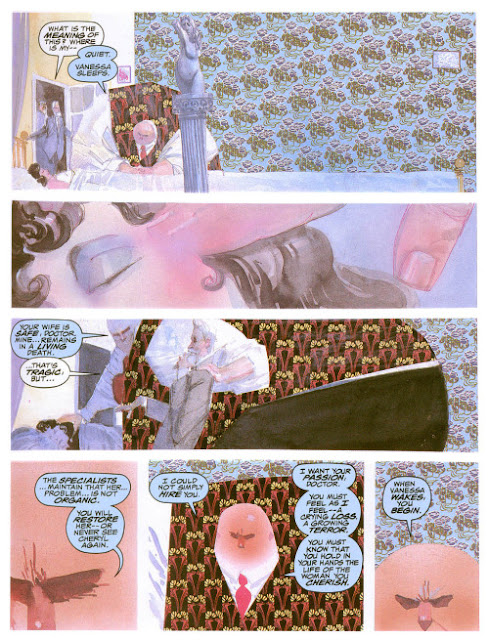 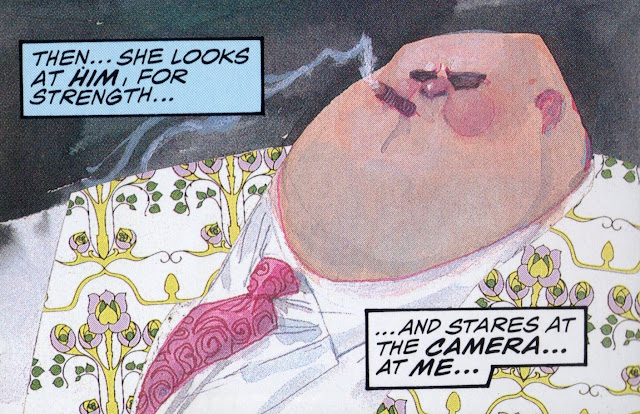 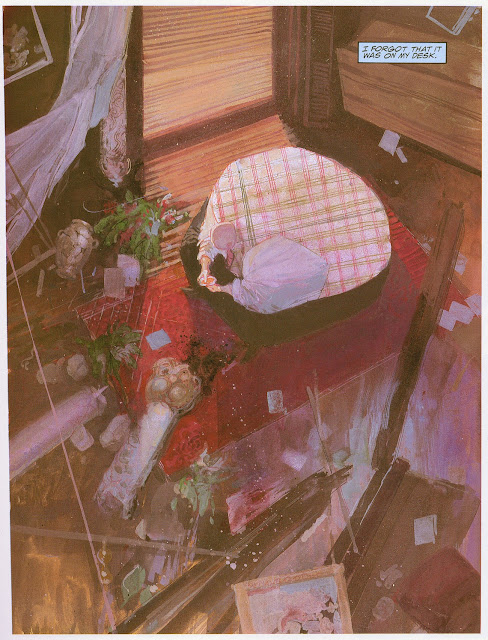 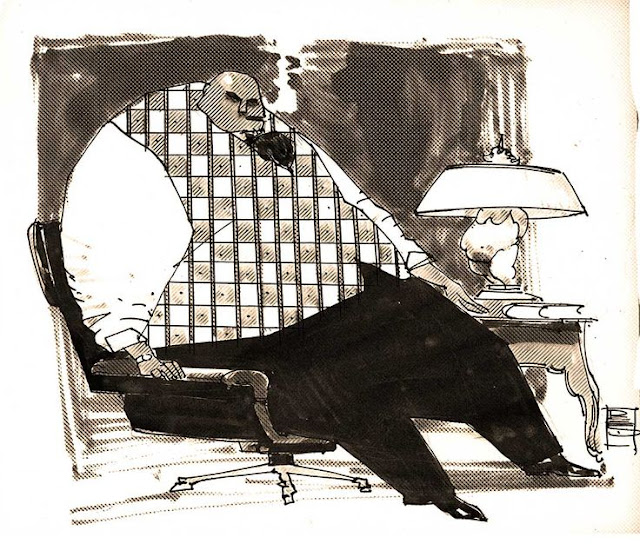