The Things We Cannot See

One Saturday night not so long ago I thumbed through King-Cat #75, a comic that celebrates the 25th anniversary of a series I’ve never read and the life of a cat I never knew. Crashing in on a serialized work that late in the game, I wasn’t convinced it would (or even should) feel like a standalone work of art. I also thought there was a real chance it would be bad. It’s not that I’m skeptical of John Porcellino’s talent. (I liked The Hospital Suite.) But let’s be honest: the death of a pet is a shaky dramatic premise. It’s gutting, for sure, but at the same time it’s not quite a legitimate reason to miss work. When a subject carries weight, but not gravitas, there’s a lot of room for the story to skew maudlin or self-indulgent.

As it turns out, King-Cat #75 is deeply flawed, and it is also very good. What’s interesting is that it isn’t good in spite of its flaws. It’s good because of them.

The star of this comic is Porcellino’s cat, Maisie, and the artist does an incredible job of endearing her to readers straightaway. 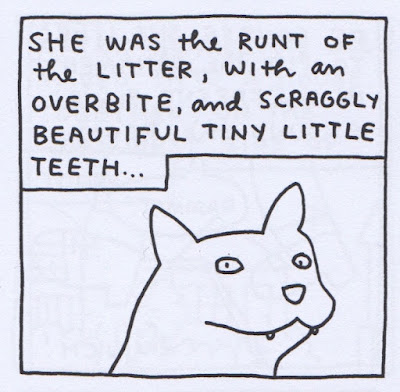 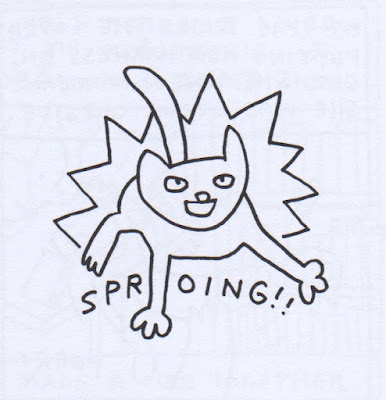 Key to her characterization is not just her sweetness, but also her idiosyncratic relationship with Porcellino—their little routines and in-jokes. 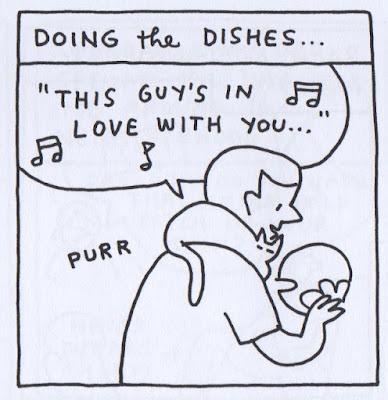 He also provides a good mix of details about Maisie’s personality, describing peculiarities (her love of beans and pineapple) alongside traits (like volatility) that will sound familiar to anyone who’s ever had a cat. I think the formula is that cats are one part eccentric… 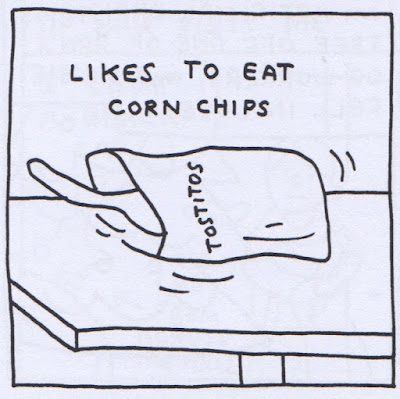 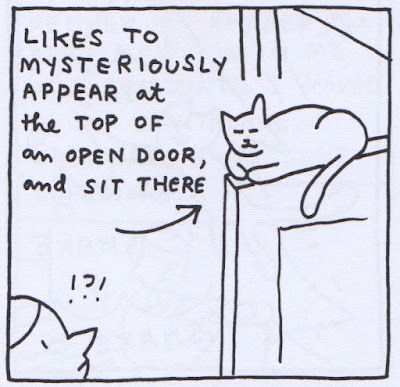 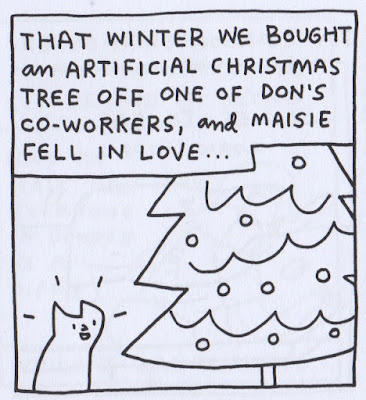 Reading about Maisie, I thought about many cats I’ve known: Renzo, who guards the entrance of his IKEA play tent with the air of a warlord; Bosey, who spent his days chirping at birds through the French glass doors leading out to my mother’s patio; Monkey, who has burrowed like a ferret inside my friend Fran’s couch; and Eddie, who sits on top of other cats when he wants to steal their patch of sunlight. But mostly I thought about Tippy.

When I was a freshman in college, my old friend Wendy turned up at my dorm room with two kittens from the shelter in our hometown. One was for her, and one was Tippy. I can’t imagine why she thought a kitten would make a good present for a person whose home was half of a glorified storage closet. Milner Hall was strictly no-pets, and I couldn’t have cared less. Like a pony but less fancy, Tippy was an impractical fantasy gift in the best possible way. He fit in my palm and slept in my hair.

In his essay “The Youth in Asia,” David Sedaris observes our tendency to use the occasion of a pet’s passing to mourn the passage of time itself. “With the death of a pet, there’s always that urge to crowd the parentheses and string black crepe paper over an entire 10- or 20-year period,” he writes. “The end of my safe college life, the last of my 30-inch waist, my faltering relationship with my first real boyfriend. I cried for it all.”

Porcellino’s frenetic attempt to “crowd the parentheses” is palpable in this comic. The pacing problem I noted in my review of The Hospital Suite is much, much worse in King-Cat #75—to great effect. Maisie bears witness to a lot of Porcellino’s life in these 48 pages. We watch him go through three major relationships (including the dissolution of at least one marriage), a near-fatal illness, the death of his father, and too many cross-country moves to count—and through it all, Maisie is by his side, or in his lap. 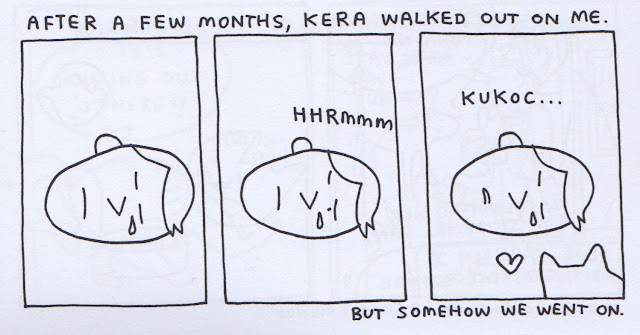 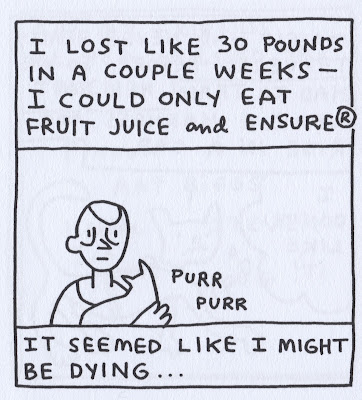 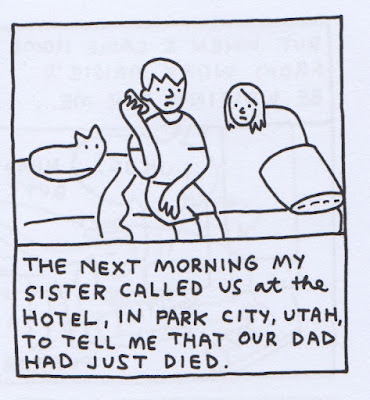 Watching Porcellino and his dad drive to Denver, I thought of the time my parents helped me move to Chicago. I was crammed in with the pet taxi in the tiny backseat of my father’s truck for the 11-hour drive. I had an unspeakable hangover, and Tippy cried the whole fucking way. 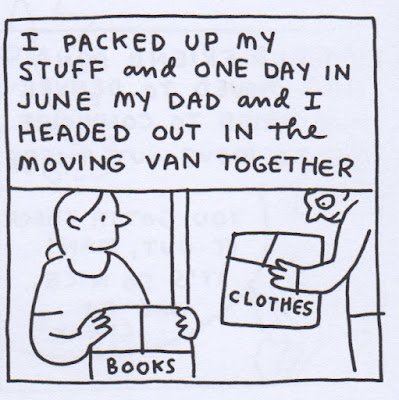 I’d been living in England until the software company where I worked laid off a third of us. Tippy and I had spent a few months home in Tennessee, and now he was coming with me to graduate school. I hadn’t yet met the guy I’d be sharing an apartment with, but when I’d sent him a picture of the cat, he joked that Tippy should pay rent. I was sad and worried about a lot of things at that time in my life, but in that moment I decided everything would be all right.

When I was a child I thought of adulthood as this static thing that involved wearing perfume and having the same flush-faced couple over for dinner every month or two. From that vantage I could not yet see how, in the fullness of time, things change. From real personal upheaval to the slow process of watching old friends turn into strangers, I spent many years of my adult life vaguely worried I was doing everything wrong. I’ve since come to realize that, much like the people in Jurassic Park build a precarious world around the lie that dinosaurs aren’t dangerous, part of adult life is a sort of low-grade pretending that humans aren’t fickle and fragile. They die or they marry or move; they have kids or drug problems or demanding jobs. Inevitably, there will be people you care about who will, without warning, peer out at you from photos like missing persons off the back of a milk carton. It’s not okay, but it’s fine. It’s part of it.

King-Cat #75 captures the secret transience of adulthood, particularly the period of personal upheaval and disorientation that is, for many of us, our twenties. It captures, too, the way in which a pet—a devoted sidekick that loves you unconditionally—helps smooth those rocky transitions. When Tippy died, I remember thinking how he’d vetted every boy I’d ever loved and remained, unlike them, a shared point of reference for all my friends from my hometown, college, and Chicago—the only creature who had straddled those three versions of my life.

Maisie died in 2007, which means that King-Cat #75 was crafted with real emotional distance. This story’s lack of tidiness, then, seems like an aesthetic choice more than a byproduct of grief. Porcellino’s memories feel fresh, even raw, but they are not unconsidered. This combination is rare in autobio, where much work falls on either end of the spectrum between fussy and deliberately unrefined.

Even beyond autobio, the mechanics of memory is a concept in comics that’s easily over-or undercooked. I found Chris Ware's Building Stories to be a charming and elegiac reading experience. But I remain unconvinced by the assertions—by both critics and Ware himself—that it was a comic that replicates the experience of human memory. Building Stories works on a lot of levels, but exo-consciousness or whatever you wish to call it isn’t one of them. Our memories are dumb, sentimental, blunt-force instruments; they aren’t nuanced or bloodless, even if the “truth” behind them is.

There is a world of difference between exploring memory as an intellectual concept and the visceral experience of having one. A few artists—Lynda Barry, Alison Bechdel—walk the line. For example, in Are You My Mother? and Fun Home, Bechdel used her penchant for cold analysis to forge an emotional connection with her parents. Years ago, during an interview, we had an exchange I often think about.

KO: Maybe what appears to someone else as distancing yourself from life is actually bringing you in closer?

AB: I think so. I feel like that’s kind of what this whole book [Are You My Mother?] is about, this very cerebral detached effort to get in touch with my feelings, to express love, which are things I can’t do easily in a direct way. I have to do them through these contortions of memoir.

Porcellino strikes me as Bechdel’s opposite; his expressions of love are plain and direct. Like Phoebe Gloeckner, he makes aggressively processed comics that come across as unmediated, almost untouched, because of the vivid way in which they convey lived experience. Often, autobio ends up being about process—all those layers of fraught consciousness about how to best convey an experience and the cost of putting it on the page. With Porcellino and Gloeckner, those struggles are invisible to us (which is not to say they don’t exist). These artists aren’t invested in their own cleverness; they don’t ask readers to think about their stories so much as to feel them.
That experience of “being” Porcellino carries all the way through the final design element of King-Cat #75, his hand-lettered note on the back cover. 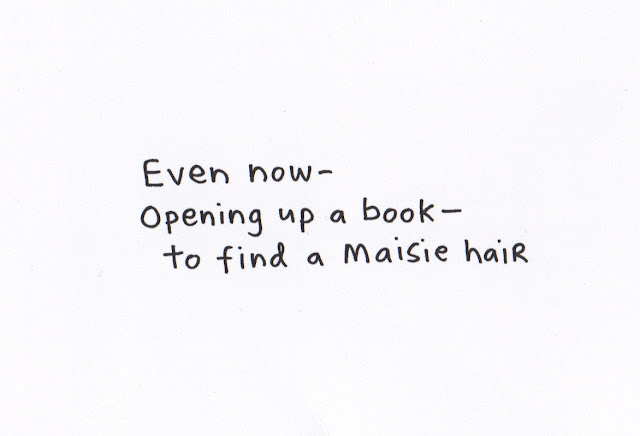 There is no period, no resolution, no satisfaction of the full stop. Like the process of grief itself, the note is as open-ended. Though Maisie died some eight years before the comic was published, Porcellino still finds one of her hairs from time to time—a reminder that’s small, unexpected, and affecting, much like his note.

Anyone in autobio worth their salt can show their story. I think John Porcellino’s work is about the things we cannot see. I know that sounds vague. Having ugly-cried one Saturday night not so long ago for the death of his Maisie and the Tipster and I guess the inevitable demise of every cat I’ve ever known, I can only tell you it’s real. The small earthly act of sitting on my couch with someone’s stapled-together comic. A feeling life is big enough to hold who we were, who we are now, and maybe who we’ve yet to be.
Posted by Kim O at 14:00