Thought Bubble 2015: bring all the people

My con report process goes something like this: 1) pre-con: I'll do a photo-post this time. Simple, effective; time-efficient. 2) Con duration: get caught up in it all and take about 10 crap pictures in the last hour of the day. 3) Post con: Perhaps a few annotations here and there; bullet-points to give it some essence. 4) Oh good lord this piece is 3000 words long, shows no signs of ending, and is as boring as fuck; end-me-now. If you've been reading any of my con reportage this year, you'll know the sheen overall has been wearing off a bit for me. I've been wondering what attending various cons can offer to the comics fan (and more specifically, to myself), as perusal of the internet can provide a similar exploration with the option of convenient purchase at the end. This year I decided I enjoyed the 2 cons I attended regularly (Thought Bubble and ELCAF) so much I'd branch out and visit more, to see what else was on offer. I ended up going to 4 cons in 2015 and it felt like 2 too many. The experiences simply weren't differentiated enough to make the time and money spent worthwhile; seeing the same things presented over and over. Unless you have particular goals in mind, I'm not sure that going to a number of events is necessary or fulfilling. I'm sure people are sick of hearing my vague ruminations on the subject, but it's something I've been turning around in my head for a good part of the year, as more comic events pop up in the UK.

So this is probably my last 'traditional' con report. I liked these two pieces I did for ELCAF and may keep on trying different angles, but I've never quite grasped what exactly I'm supposed to be reporting on: the saw this/did that formula seems inadequate and repetitive.

Which is to say I wasn't sure how Thought Bubble would go. It's always been my favourite con (and easily the best one in the UK), but it's been an odd year in comics and as it grew closer, I couldn't help but wonder if it, too, would be affected by the subdued apprehension that seems to have marked 2015 in many ways.

To be honest, it felt like the festival benefited from that calmer atmosphere; a toning down that was helped along by the rainy weather on Saturday. Thought Bubble has gotten so big and successful that the last few years have built up a sense of 'where do we go from here' a plateauing of expectation -even though it doesn't need to go anywhere. In its 9th year (and my 6th of attending) it seems redundant to reiterate how good the festival is, but that it continues to sustain and improve upon that level of excellence is the more remarkable and noteworthy achievement. Thought Bubble knows what it is: a comics festival that celebrates the medium and its associated arts; where you can find people like Scott Snyder, David Aja, Emma Rios, Bengal, alongside Kate Beaton, Farel Dalrymple, Noelle Stevenson, and Joan Cornella; with collectives like Comic Book Slumber Party, and British cartoonists galore: Lucie Ebrey, Dan Berry, Joe Decie, Becca Tobin, John Allison, and so many others. And that's where its strength lies: in presenting both the omnivorous comics fan and the more casual attendee with a smorgasbord of choice, whilst embracing and bringing together various areas of comics in a manner that's open and encompassing, and reflective of the breadth of contemporary comics today. It does this; it does it consistently, and it does it very, very well. Which is a testament to the superb job Martha Julian, Clark Burscough, Biz Stringer Horne, Lisa Wood et al. do in organising the festival.

On a personal level, what Thought Bubble brought home for me this year was how much cons are about people (I know this because I made a bullet-point list of con notes and one was 'people'). For all its problems, comics still does community unlike any other field: that at its best is affirming and reciprocal; nurturing and supportive. Comics is often an isolating job or passion for many, so to have that bedrock of immediate familiarity, of shared interest and understanding, is validating -and everyone needs a degree of validation beyond what you can provide yourself. I had an amazing time and that was just courtesy of talking to, and spending time with some great people.

I'm going to quickly spotlight the 3 artists/tables I came across that were new and interesting to me, and who you should follow and be aware of, and then a bullet-point list of random recollections with a jumble of pictures thrown in. I'd recommend reading unto the spotlights- the rest is waffle. 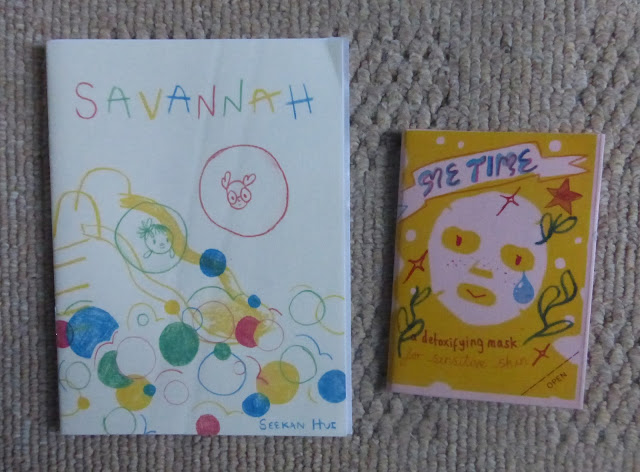 Froglump: Froglump is an art collective made up of Seekan Hui, Lucy Haslam, Lizzie Houldsworth, and Hannah Jay. The four are all currently studying illustration at Falmouth University (which seems to be doing a very good job of turning out British cartoonists) and this was their first time tabling at Thought Bubble, although they've been making appearances at various art and zine fairs throughout the year. Thanks to Tom Oldham for pointing them out to me, because at the time on Sunday I was wandering glazedly, brain kaput, without actually taking in much. Their work just looks really fresh and inviting, attentively produced; it makes you want to pick it up. It's exciting to see young artists so passionate about comics and making  (and it makes me feel OLD). Seekan Hui's folding, cut-out comic, Me-Time, about a lady getting a facial was a highlight. You can find their online store here; I'm sad I missed out on those frog stickers. 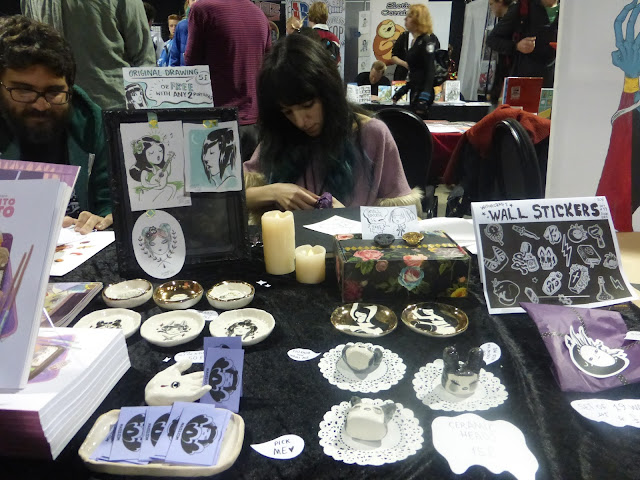 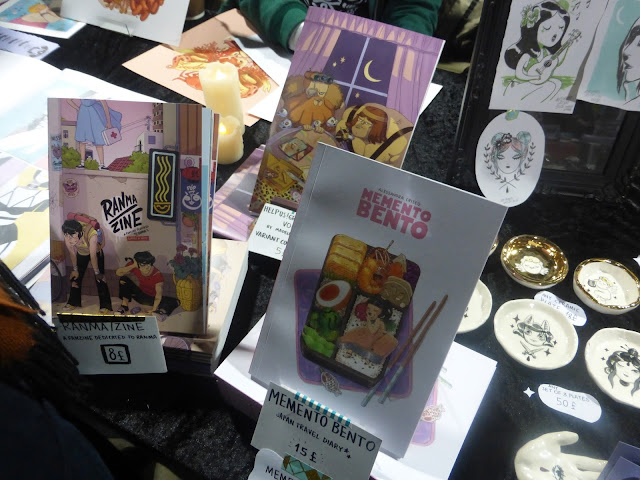 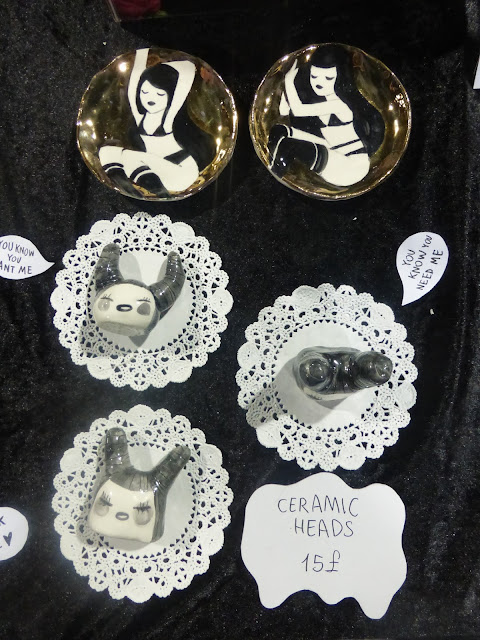 Alessandra Cresio: All these spotlight tables are ones I came across on Sunday, which is when I spent most of my money. Laura and I were both incredibly enamoured with Alessandra Cresio's table, largely due to her amazing ceramics. I ended up buying these 2 pots, but the ceramic heads and that hamsa hand were giving me starry eyes (my purse was not). Memento Bento, her Japan travel diary, which I ended up circling back for, is frankly brilliant. Travel diaries are becoming a quietly popular genre within comics, and this one is a superior example; the quality of the illustrations, photo collages, paintings, sketches, colour, production. I really wanted the Ranma 1/2 zine to which she contributed a piece, but hard choices had to be made. When I go to cons I want to see and discover things and artists I won't find in shops, and this table was a perfect island of goodness. 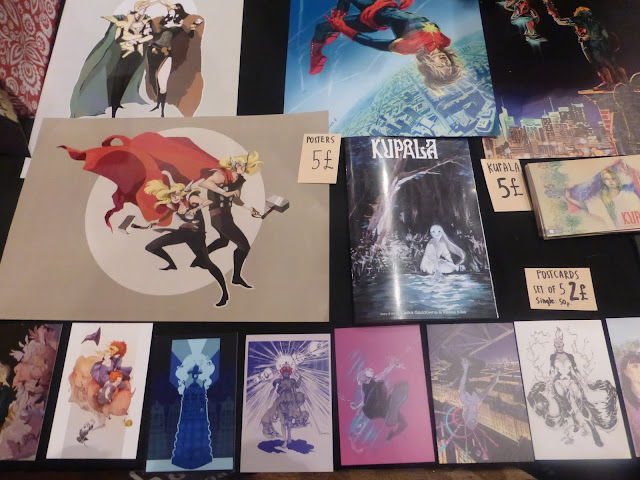 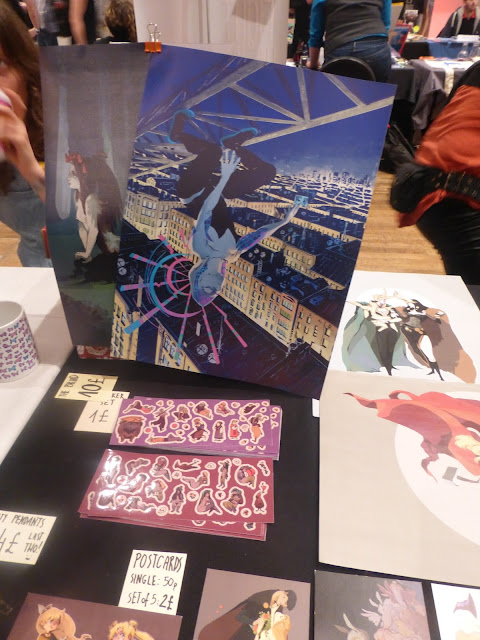 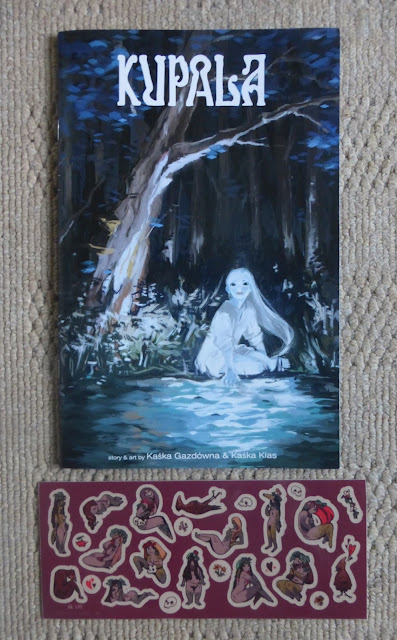 Kaska Gazdowna and Kaska Klas: One of the 3 books I definitely wanted to pick up -along with Dan White's new Cindy & Biscuit, and The World by Valentin Seiche- was Kupala by Polish duo Kaska Gazdowna and Kaska Klas, as I'd seen something on Tumblr about it prior to the festival. Steve patiently accompanied me as I stalked around the Teepee  on Saturday, convinced that's where they were situated, but had forgotten the name of their table and therefore couldn't locate them. Luckily, I found them on the Sunday (they were actually in the Armouries Hall) when I had a 5-year old on one hand and a 3-year old in sulky stand-off 10 yards away, and managed to snag the second to last copy of Kupala before it sold out, and was planing to come back (sans nephews) for their other book, but that too, was all gone when I returned. As far as I can tell, the stuff I'm more drawn to is by Klas, who's the artist of the book, and whose Tumblr is full of lovely work. They had an attractive table, mixed with their own original work -troll girls and woodsfolk- and fan-art stickers and prints, but the quality of the work across the board was of  a really high standard. 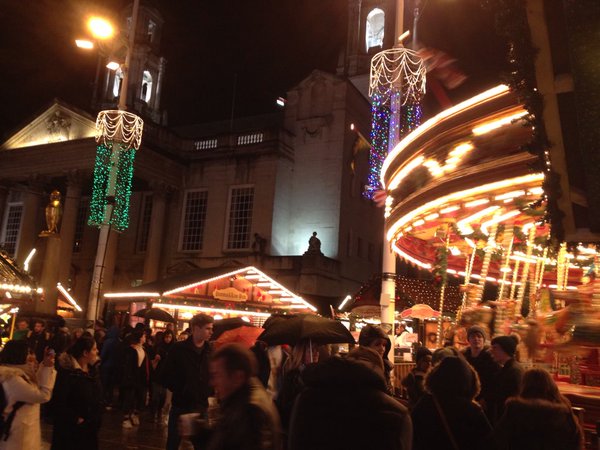 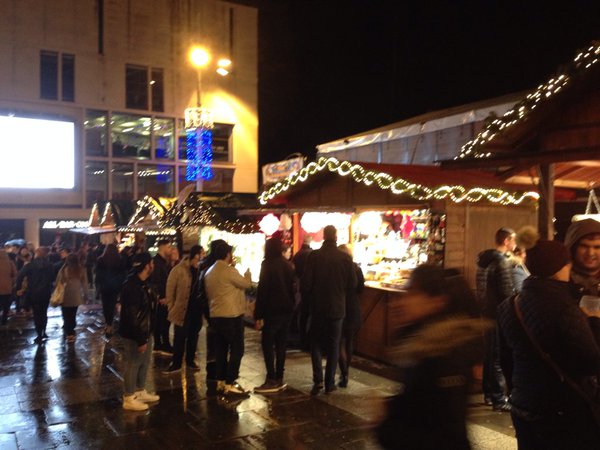 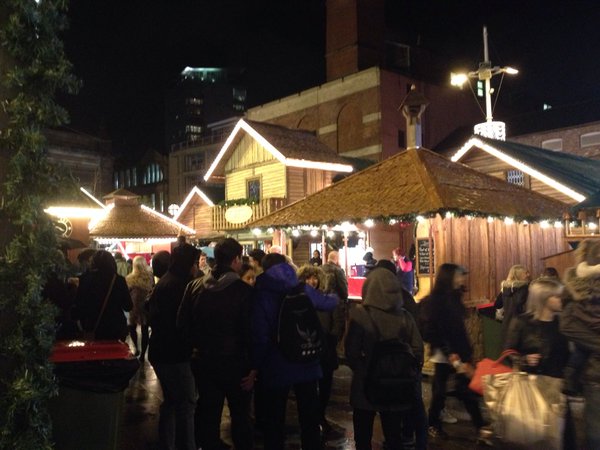 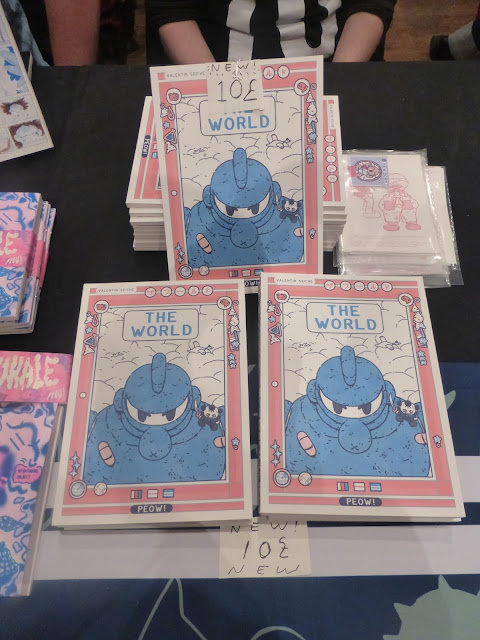 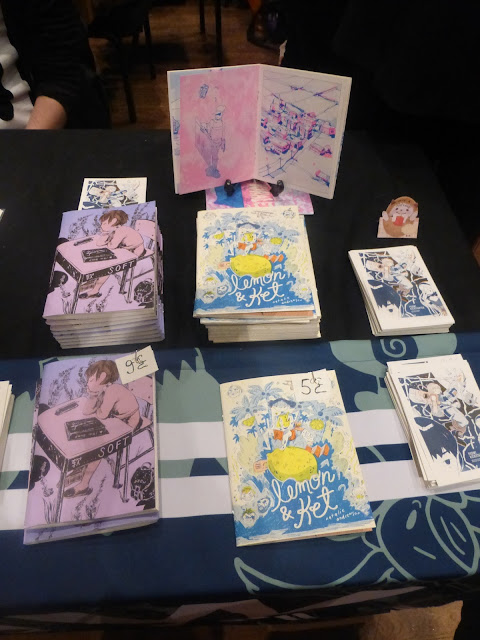 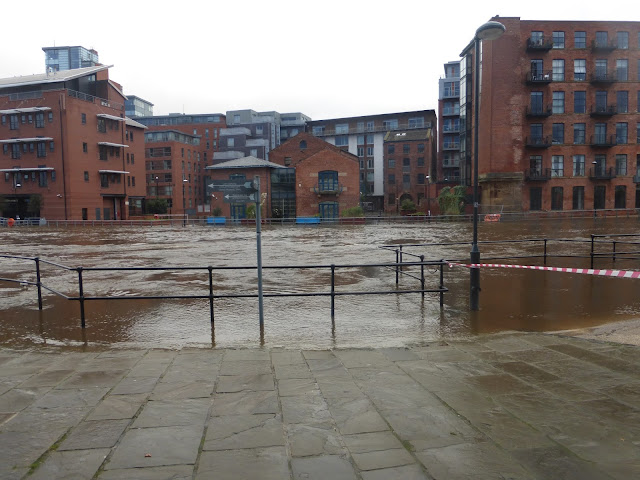 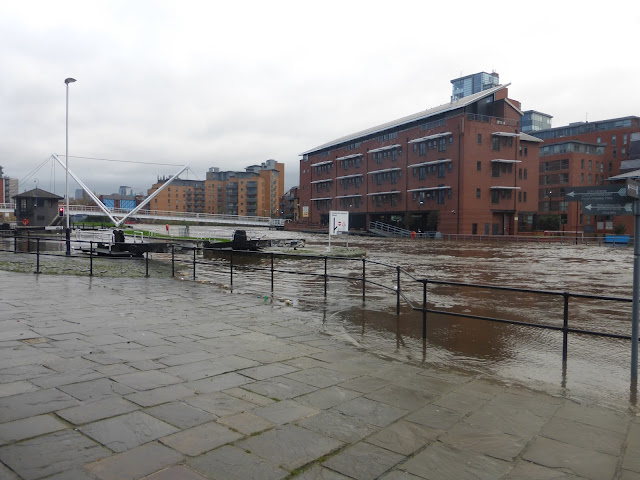 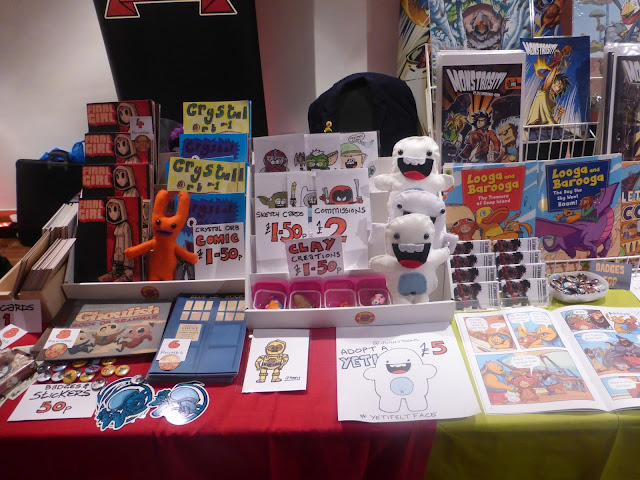 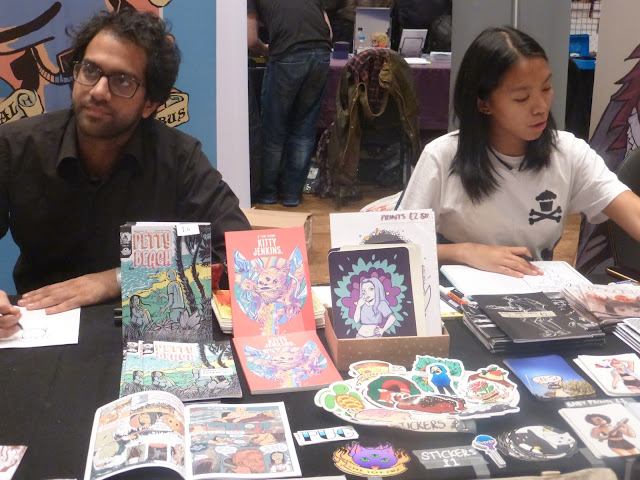 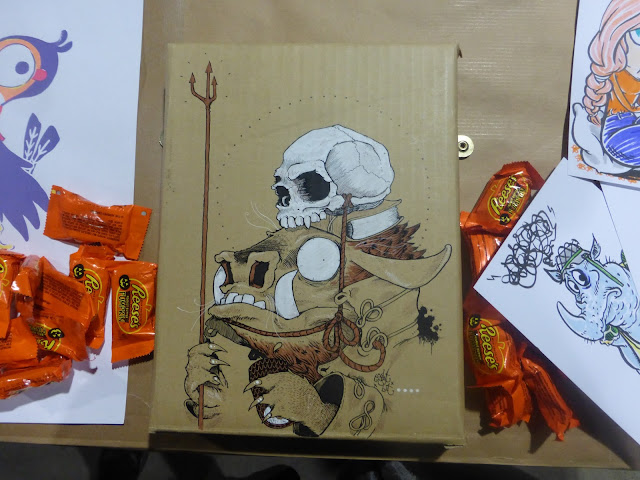 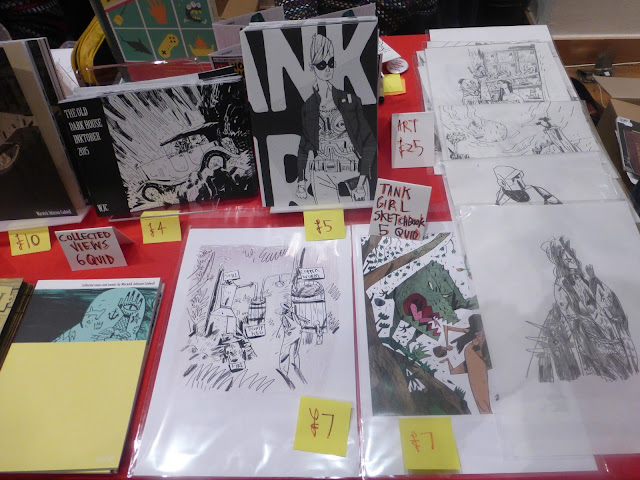 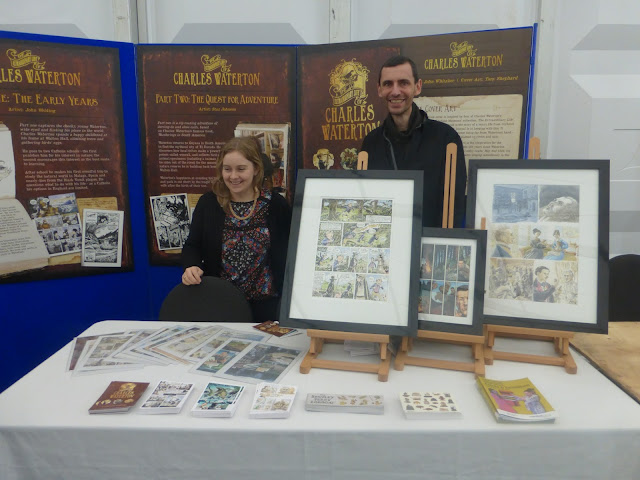 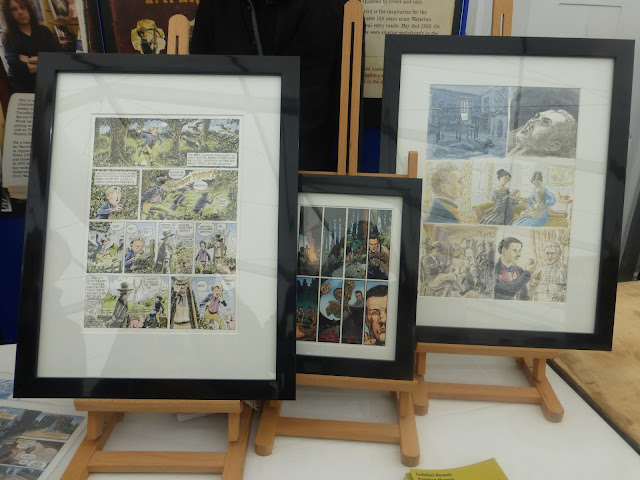 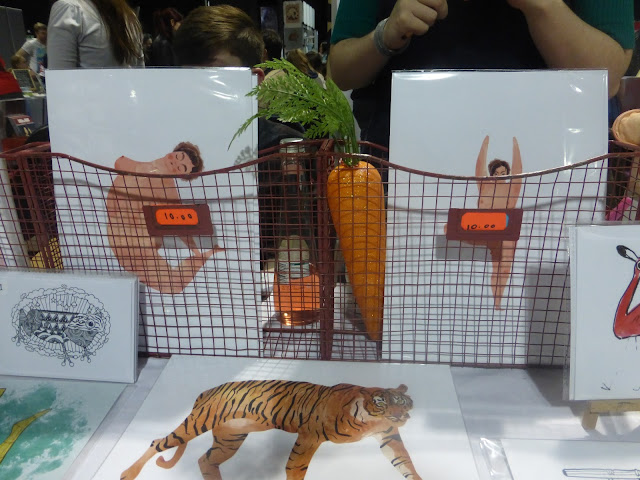 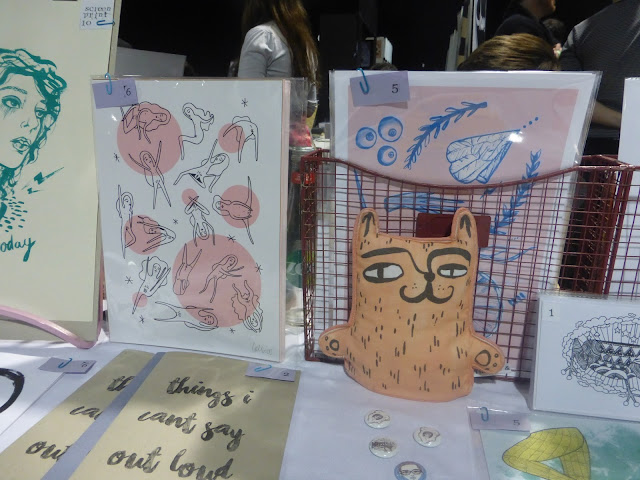