Earlier this year, the New York Times extolled the feminist legacy of the legendary alt-comics publisher Drawn & Quarterly. Hailing D&Q as a “Champion of Female Cartoonists” in the headline, the article envisions a sort of feminist utopia where the “well-regarded publisher of graphic novels is inextricably intertwined with the advance of women in independent comics.” On the surface, it all sounds plausible enough.

Much caught my eye about that piece, starting with the fact that the only cartoonists the author chose to quote were men. (Julie Doucet, Lynda Barry, and Kate Beaton were each interviewed about their own work—not the alt-comics publishing milieu—in separate mini-profiles.) First the author checks in with James Sturm, who isn’t exactly known for his feminist cred. She then inexplicably turns to the cartoonist Seth for his thoughts regarding the publisher’s “encouragement of women.” According to him, D&Q is “a nonmasculine, noncompetitive environment that reflects how art comics have become much more of a women’s world.”

This quote took me aback—not because Seth was speaking as a man (though JFC), but because his description seems entirely at odds with that of Julie Docuet, who has interviewed elsewhere about her frustration with comics as a boys’ club. Indeed, more than once I’ve seen her cite that very boys’ club as one of the main reasons she quit comics 15 years ago.

Because, hey, remember that? JULIE DOUCET QUIT COMICS, a fact that’s conveniently omitted from both the NYT article and D&Q’s seven-zillion page celebration of itself, which we’ll get to soon enough.

Another thing about the NYT piece I noticed was its weird sexist remarks from Peggy Burns—a woman I admire. “Women just naturally gravitate toward our list,” she said, as though female readers aren’t also gravitating toward, say, superhero comics or manga. “We [D&Q] like personal, sincere storytelling. When you boil it down to that, you’re going to have more female authors.”

But the thing in that article that really really caught my eye was the brief appearance of a totally fabricated statistic: that D&Q’s “list tends to be 50-50, male-female.” I don’t know if the author got those numbers from Burns, feminist spokesman Seth, or elsewhere, but I can tell you that she didn’t get them from the gender breakdown of D&Q’s actual catalog, which looks much more like 75-25.

I think if you know anything about this industry, “tends to be 50-50” sounds sort of dubious. But as it happened, when I saw those numbers in the NYT article, I didn’t feel doubt; I simply knew them to be false. Just days before, I’d had a long conversation about D&Q with my friend Tahneer Oksman, who is a comics scholar. In preparing a review of their anniversary tome for the Los Angeles Review of Books, Tahneer had taken it upon herself to do a straightforward tally of D&Q’s contributors, who are listed in the index. She had shared with me her as-of-then unpublished findings: only 25 percent of D&Q’s contributors were women.

I’ve since taken a closer look at that index and I’d like to give you a sense of what I found. (Disclaimer: I’m a math-phobic person with a phone calculator and a case of the flu, not Nate Fucking Silver, so I inevitably screwed something up along the way. The raw data is available to anyone with a copy of the book.) I didn’t doubt Tahneer, but I wanted to make sure the “one in four” statistic held true whichever way you sliced it—e.g., whether or not you factored in anthologies, or looked at the number of titles (or even page counts) instead of the number of creators. I also wanted to make sure that the stat hadn’t changed drastically over time (starting slow and steadily building to 50-50 over the 25 years, or something like that).

Haha, nope. The flat truth is there have never been very many women creators at Drawn & Quarterly. Looking at their catalog as a whole (not counting anthologies), 73 percent of its creators are men. If you analyze the gender breakdown by number of titles or page output, that number creeps even higher; men’s titles account for 78 percent of both D&Q’s catalog and total page count.

(A quick note on methodology: titles with more than one creator were counted once for each creator. Also, though I didn't factor it in, it's perhaps worth noting that at least 15 percent of female creators' total page output wasn't comics-related [e.g.,  hefty volumes like The WORN Archive and Tavi Gevinson’s Rookie books].) 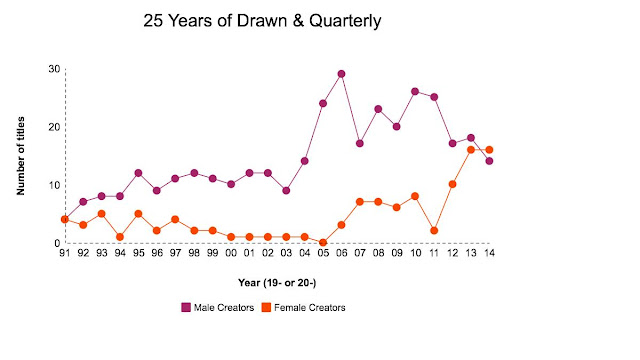 Sadly, in the landscape of comics publishing, that’s enough to put D&Q ahead of pretty much everyone else, at least among publishers of similar or larger size. To return to my pal's original finding: at Drawn & Quarterly, one cartoonist in every four is a woman. That's certainly a far better showing than we get from the Big Two, where that number is something like one in six or seven (a ratio that becomes way worse if you consider their catalogs holistically instead of as a present-day snapshot). And if I may hazard a guess, it is also a much better showing than D&Q’s alt-comics counterpart, Fantagraphics. By a lot.

On the other hand, one in four is still very poor—and it's hardly a "list [that] tends to be 50-50, male-female." That anyone would perceive an average of 25 percent as a history of equality speaks to the extent of the problem of gender disparity in comics.

So how does a publisher with a roster like that get labeled as a “Champion of Female Cartoonists” by a newspaper of record? Since the piece was about the publisher’s legacy, it doesn’t strike me as another example of mainstream media packaging fraught conversations about diversity in comics as a trend. Instead, it is a myth that started (so far as I can tell) in the pages of the D&Q anthology itself, and has since been ratified by industry publications that have heaped praise upon it. Having  now appeared in an “objective” source like the NYT, that myth looks a lot more like history.

You could argue, as some have, that the anthology is a glorified product catalog, and such bias is understandable and to be expected. But you could also argue—sorry, I will argue—that the opening essay has Jeet Heer’s name on it as a researcher. I don’t know the writer, Sean Rogers, from Adam (no disrespect intended), but Heer is a trained historian, which to me sets an expectation that what I’m about to read is not straight publicity. Squint at the introduction to their anniversary book and you might get the impression that D&Q single-handedly invented graphic novels, feminist cartoonists, and autobiographical comics. Why? Their real accomplishments would have been impressive enough.

Opening that beautiful brick of a book, I was fascinated to learn about the feminist agenda laid out by founder Chris Oliveros  in his “defiant editorial” from D&Q no. 1. The introductory essay describes how Oliveros “lament[ed] the fact that the world of comics was ‘a private boys’ club’ producing work that ‘very few women actually read.’”

Presumably, the boys’ club that Oliveros so despised was the same one that Julie Doucet would later reference as one of the reasons she decided to quit comics. It seems to me, then, that Oliveros’ so-called feminist agenda failed by his own standard, but you’d never know that from reading the anthology. “D&Q was dedicated to making inroads against the gender imbalance in comics,” Rogers writes. “In the years to come, that effort would only redouble.”

Like…how, exactly? Doucet was the closest that D&Q ever had to a totem woman, and she wasn’t there all that long. Meanwhile, Seth has published nigh on a thousand Palookavilles, Chester Brown has nearly half as many titles to his name as ALL the women of D&Q combined, and Adrian Tomine just farted out the most acclaimed graphic novel of 2015.

Not for nothing, those three men aren’t D&Q’s top sellers. The publisher’s moneymakers, according to the NYT piece, are all women—Lynda Barry, Kate Beaton, and Tove Jansson. Those three careers look very different than Seth’s, Brown’s, and Tomine’s. I’m delighted that Lynda Barry found a home at D&Q (and I haven’t given them enough credit for the vision they’ve shown in reviving her career), but the fact is she came to them fully formed as an artist. So did Kate Beaton, who came to D&Q having already established a huge audience with her web comics. Poor old Tove Jansson was literally dead when D&Q started (re)publishing her Moomin books. Those working relationships are each valuable and important in their own way, but they’re not quite the same thing as nurturing a cartoonist across a career. Why hasn’t D&Q formed any long-term relationships with female cartoonists that resemble the ones they have with Seth or Brown or Tomine…or Anders Nilsen or Guy Delisle? Shouldn’t a Champion of Female Cartoonists be doing stuff like that?

Back when the NYT article ran in June, I (respectfully) raised some of these questions on Twitter. I was immediately delisted by Drawn & Quarterly, which means they no longer mail me any advance copies of their books.

With interest, I have noted that both industry and mainstream outlets' coverage of D&Q in this, their anniversary year, reads a lot like a press release. (The aforementioned LARB piece and this review by Rob Clough are notable exceptions.) I was surprised when the only commentary I saw on that piece in the NYT came from Heidi MacDonald, writing at The Beat. “It makes a ton o’ sense,” she declared, before going on to make what could have been an interesting comparison between the photo from the article (a grid featuring four women and two men) and a 2004 NYT Magazine cover that featured five male cartoonists (who were all contributors to D&Q.) Her conclusion? “The above photo from the article also kind of pulls the blanket for naptime over this story from 11 years ago.” Like this whole gender imbalance thing was just a problem that comics has overcome in its maturity.

Drawn & Quarterly is one of the best publishers of comics in the world—my favorite, in fact. In writing this, I don’t wish to detract from its importance to comics, which is huge, or its feminist legacy, which is real (even if it doesn’t much resemble the one it has claimed). I’m just weary of this pervasive and damaging myth that we’ve achieved gender parity in alt comics. Sure, D&Q has published more women than its counterparts, but that bar is very low.
Posted by Kim O at 15:00