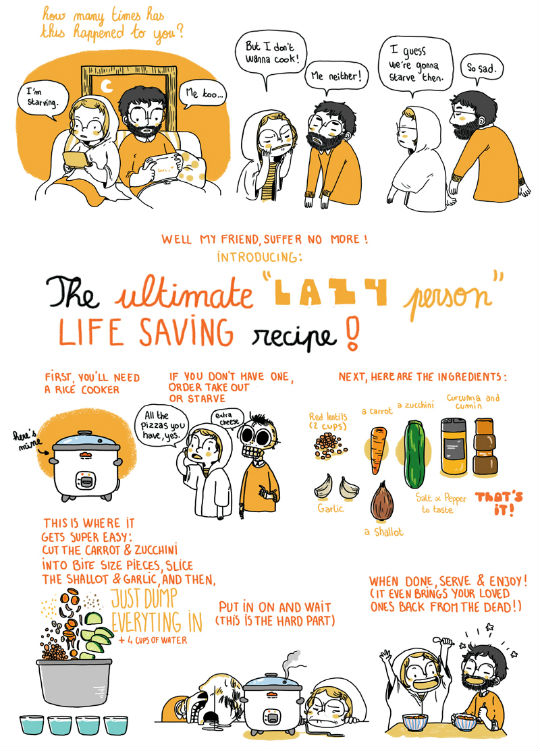 Like many people, I first came across French cartoonist Lucie Bryon's work via her 2013 viral 'Introversion' comic -created as part of her degree-, and have been following her subsequent output via her Tumblr blog (which is the main place to find her comics and art), and on Twitter. One of the pleasures of keeping abreast of younger artists work, is that often you get to seem a more distinct progression and evolution than say someone who's developed a style and level of ability which they then refine in less visible ways. From warm and funny auto-bio comics to delicious and absorbing recipe comics, Bryon's comics are beautifully crisp and fresh, always engaging, and have simply gotten better and better -and I'm very grateful she posts them online in English as her published French-language work is inaccessible to me (here's hoping a savvy British/Canadian/US publisher puts out a collection of her strips soon)!

But for now, it's over to Lucie as she walks and talks us through her collection of books in the latest installment of comics shelfie: 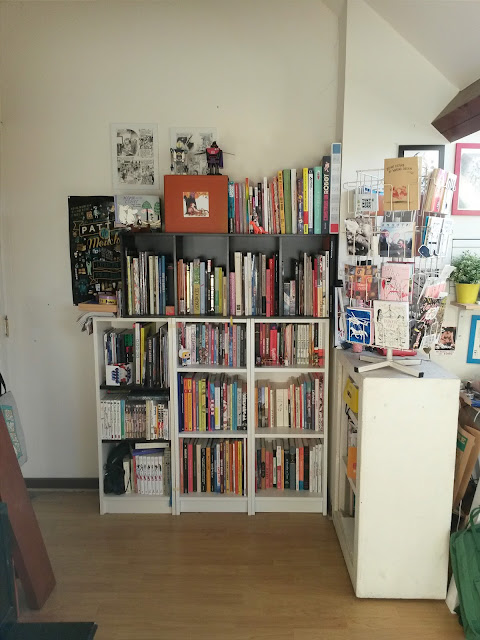 'I’ve been reading comics for pretty much my whole life, my parents being big comics buyers too, and started buying and collecting my own as a teenager, mostly buying manga at the time, then gradually a lot of other stuff. The collection that I have here in Brussels started approximately 5 years ago when I moved here ( and only brought 4 or 5 comics with me), so most of my collection from my teenage years and first three years of college is at my parents home.

As I live with my boyfriend, we share the shelf space; at first we had two shelves each, but as time went by, the organization went out the window and now it’s more like "where can we fit more books ?" I’m a much more avid buyer then him though, so most of the space is taken by my books. 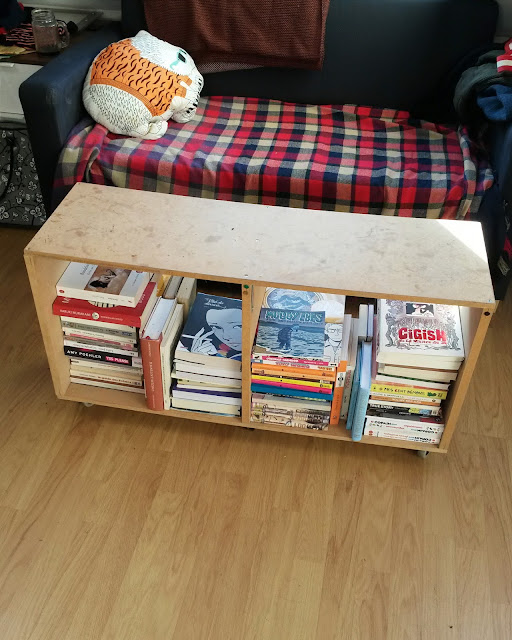 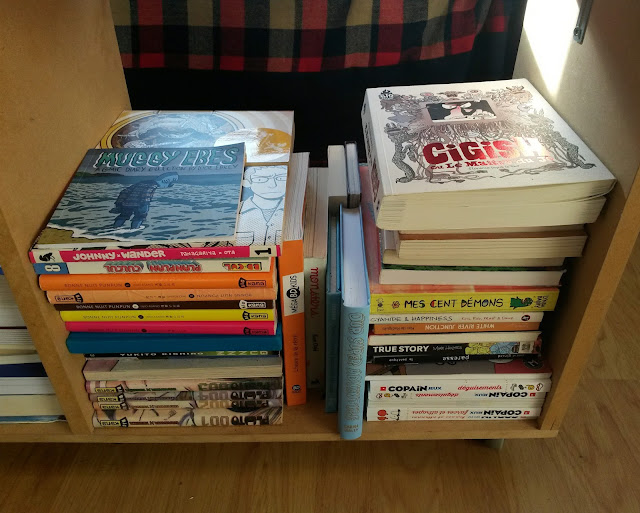 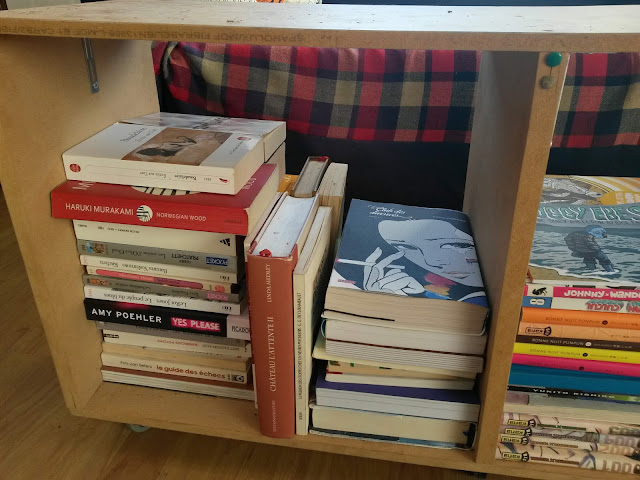 Even our coffee table is actually a shelf he built for me, turned into a table because we needed one and I thought it would look pretty neat. With time I also discovered that my friends love it, everytime they come by, they start reading whatever comics are on top. We mostly use it to store novels, manga, and books that have an unusual format, in a never-ending game of tetris. I also store my author copies of the kids books I illustrated; everytime I receive the box of 20 new author copies, I'm thrilled and freaked out at the same time; so I give most of them away to friends and family. 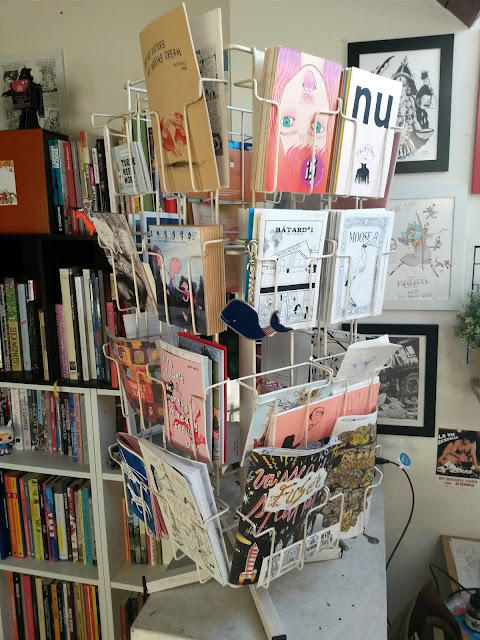 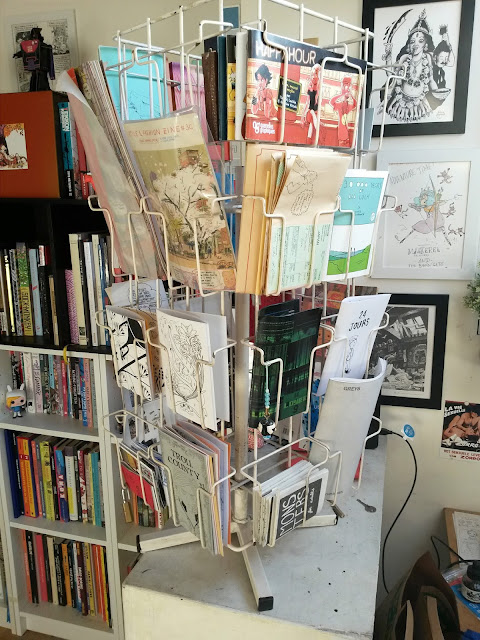 I’m really happy and weirdly proud about this thing. I found it at the flea market after searching for a very long time how I could store my zines; and it’s perfect. I can’t fit all of them in it since the slots are narrow, but it’s really great for displaying most of my favorite minis. 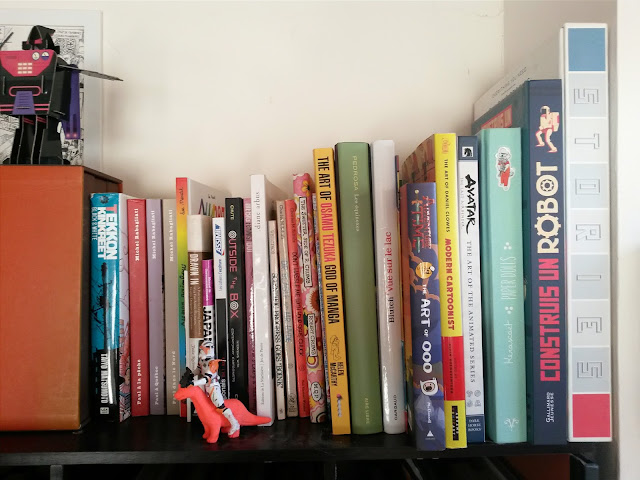 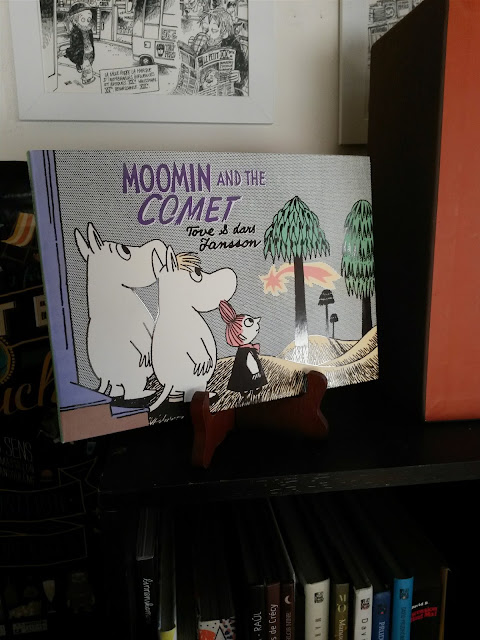 At the top of our shelves, we put all the art books and other gigantic collections that don’t fit anywhere else (like Chris Ware’s "Building Stories" and the Calvin & Hobbes collection).I do love sketchbooks and artbooks a lot, and dive into them whenever I feel low, to always discover something new. There’s also two books to learn Japanese here, I bought them very motivated and haven’t touched them ever since by lack of time. Knowing they’re here make me happy though, I’ll definitely get to it someday ! And finally, some toys and a little stand Valentin found on the street, that I use to display my favorite comic of the moment. 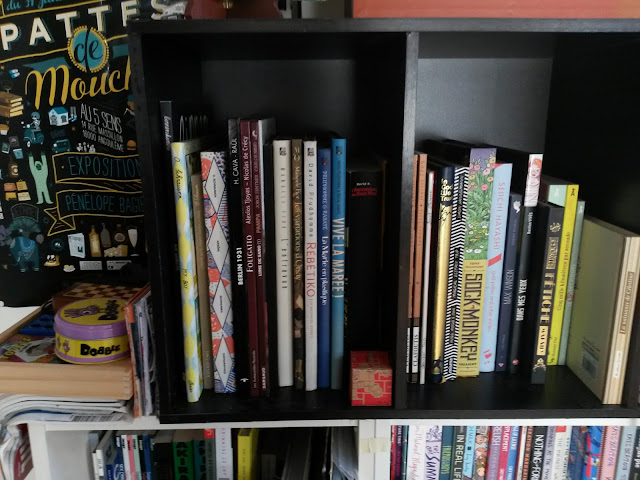 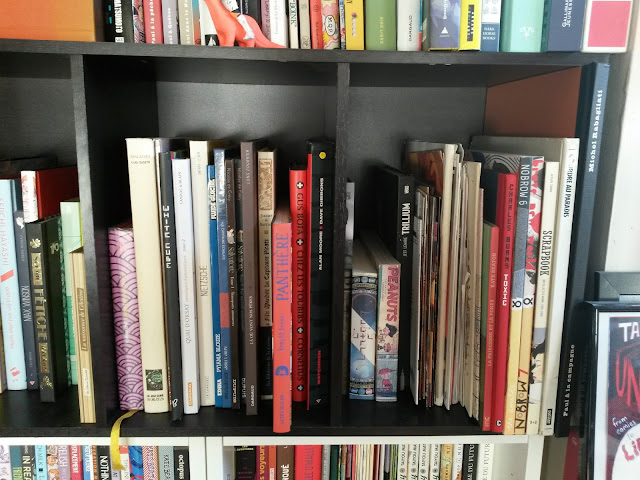 In this shelf are most of Valentin’s books and graphic novels, and some of my bigger books and magazines. 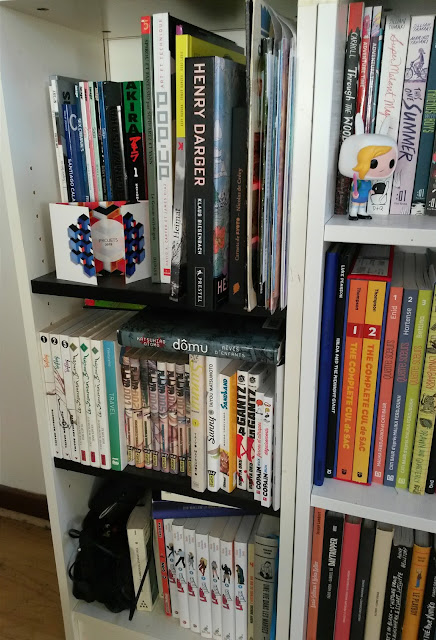 Mostly Valentin’s again, with the exception of the Saga volumes, Pluto and Last Man series. 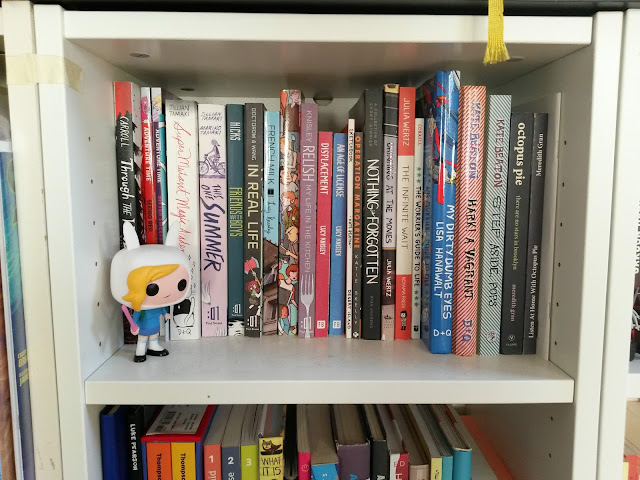 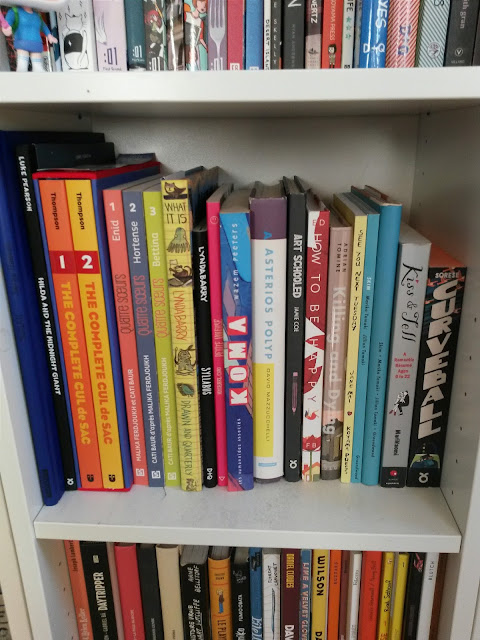 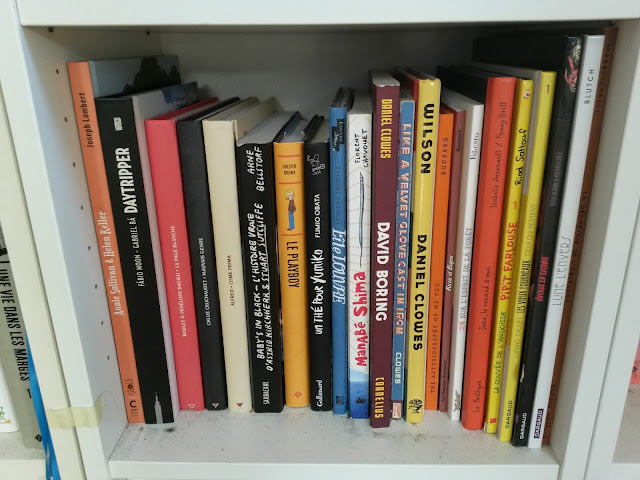 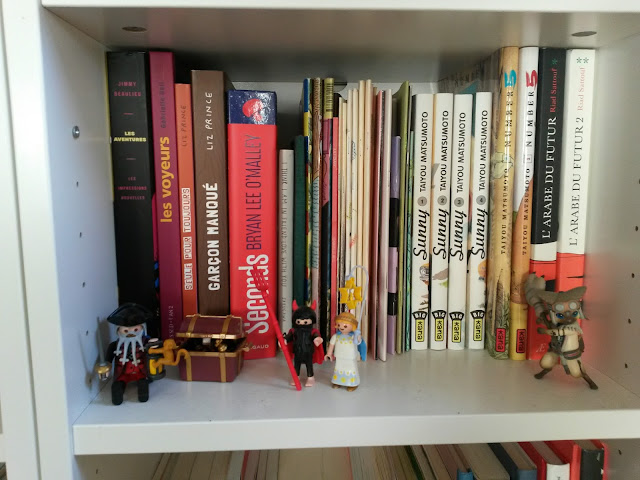 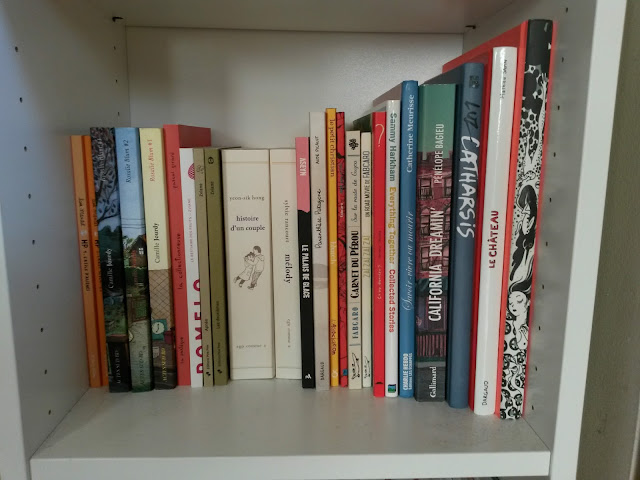 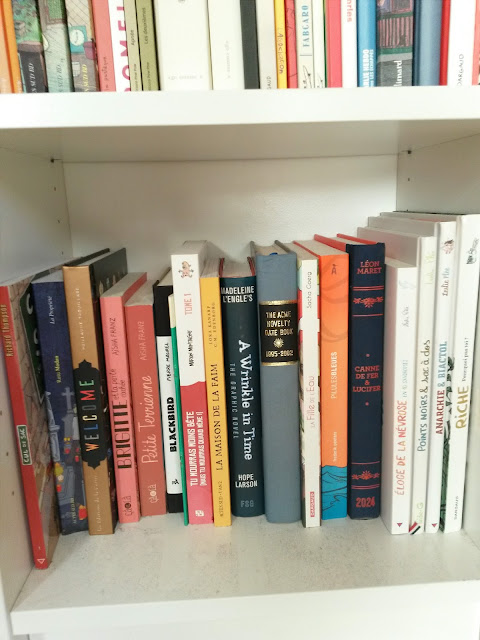 As for the rest, I had a system before, but now it’s more of a 'where will it fit' situation; it has gotten more like a classement by size, but basically you have:

• US graphic novels, in English.
• Graphic novels in French
• bandes dessinées
• Some manga
• And all of the zines that are too big to fit in the postcard holder.

I could go on for hours talking about my love for Lucy Knisley, Inio Asano, Lisa Hanawalt, Linda Barry, Daniel Clowes (hell, I even have one of his drawings tattooed on my body) or Jillian Tamaki, don’t worry. But I kinda felt like everything I would say as already been said (and way better).
So I decided that I would try to talk about books that I love and not everyone knows, as some are not translated in English. 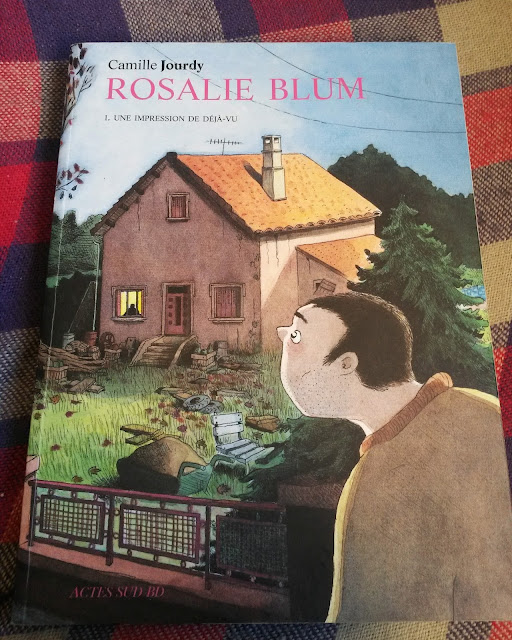 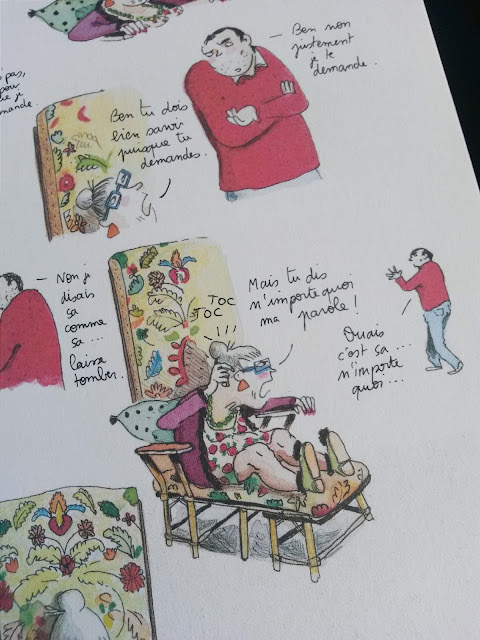 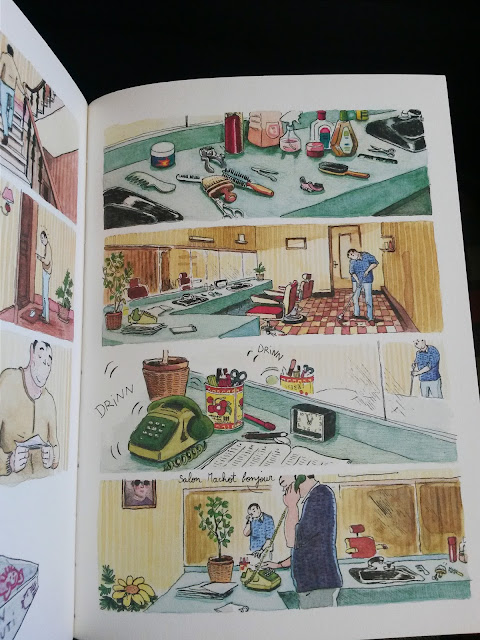 Rosalie Blum / Camille Jourdy
So, this one has not been translated into english but who knows, maybe some editors project to do it ? Anyways, it is one of the few comics that I brought with me in Brussels when I moved here, and it’s very dear to my heart.

Written and illustrated by Camille Jourdy, Rosalie Blum is a 3 volumes series following a 30 years old man named Vincent, whose life is in kind of a slump, until one day he meets a woman who gives him a strong sense of « déja vu ». He then starts following her and…a lot of stuff happens. I can’t really tell much more as one of the strong points of the series is how everything turns over at some point, and is best discovered by reading it. The premise may sound like a « creepy guy follows lady » story, but it is actually really sweet, full of depth and interesting characters.

Jourdy’s art is very delicate and contributes a lot the the warm feeling you get reading the story. Her use of watercolor influenced me a lot, and I can’t recommend her work enough. 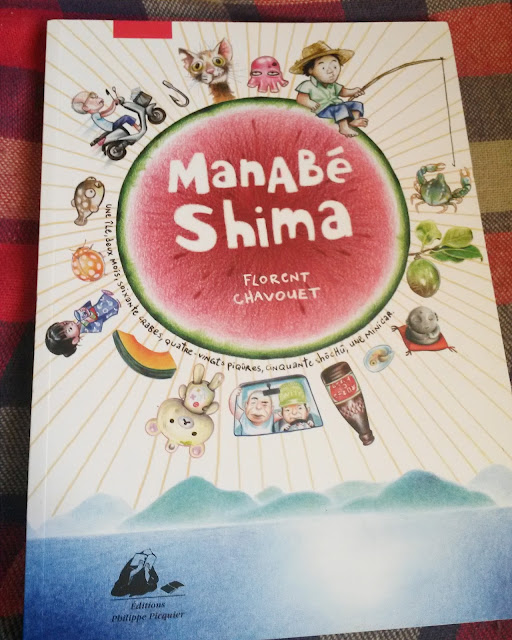 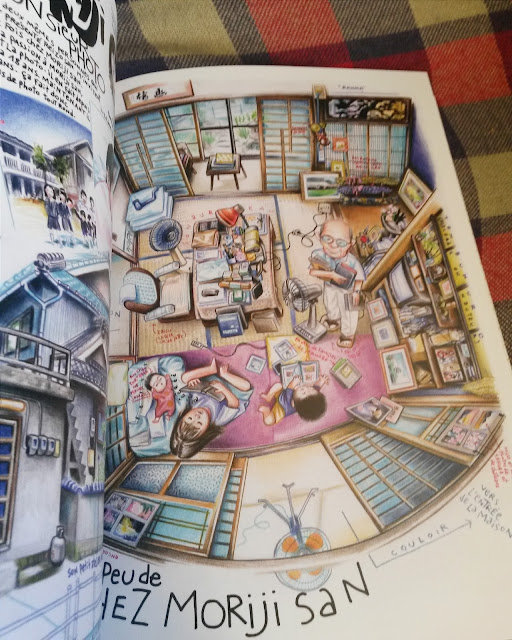 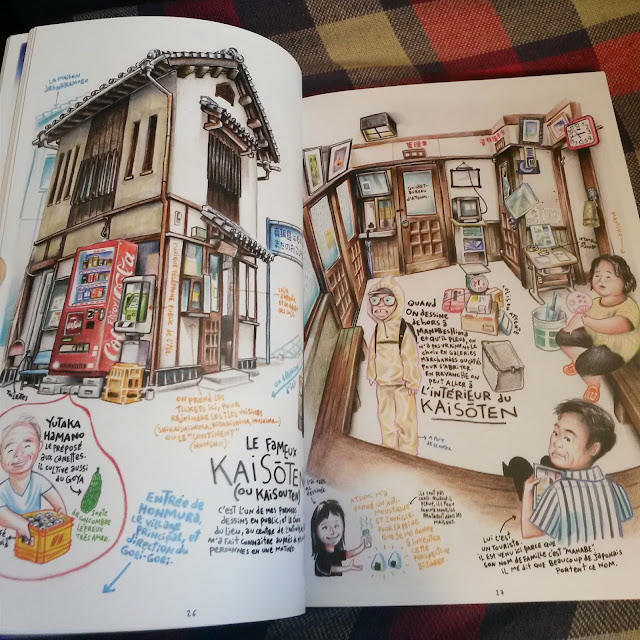 Manabe Shima / Florent Chavouet
Florent Chavouet is probably one of my favorite illustrators of all time. His work mesmerizes me, and I could spend hours looking at his splendid splash pages and maps. His two first books (Tokyo Sanpo and this one) have been translated into english, and I can't recommend you to get it enough.

Manabe Shima is a travelogue from the time he spent on the small island of the same name. In the book you’ll meet most of the inhabitants of the small island, and embark on a fantastic journey. His work is funny and full of life, brought out marvelously by his typography skills. Even if you never thought about going to Japan, you definitely should read this, just for the funniest human interaction depictions. 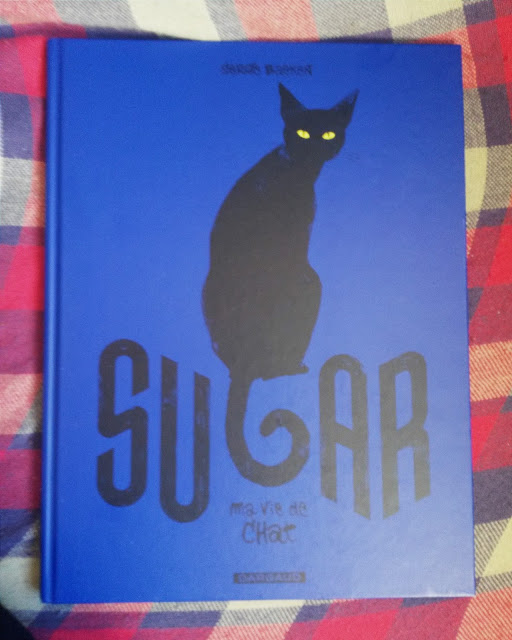 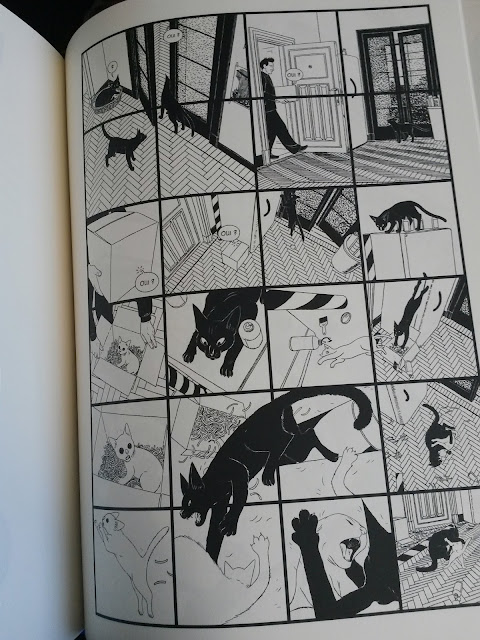 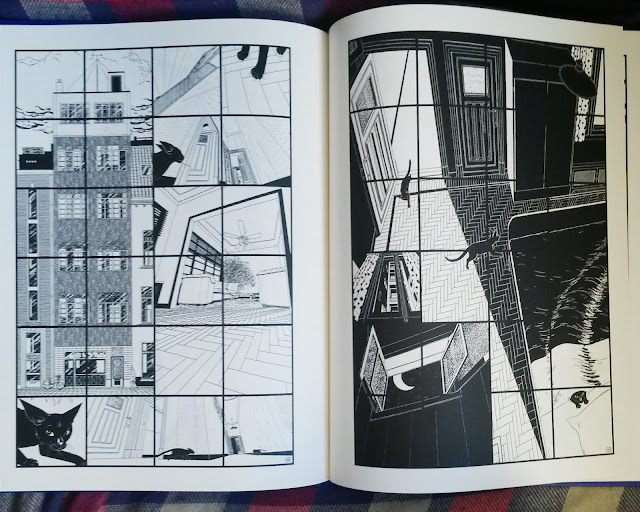 Sugar / Serge Baeken
I picked this one as a strong exemple of the Flemish school of comics, and because it’s mostly wordless. Sugar depicts the life of a cat of the same name, through the years. It hasn’t got too much of a story, except for the parts about the humans surrounding him, who start as a young couple and end the book as parents of a little girl. The rest is mostly Sugar going about his daily cat life, chasing stuff, wandering around.

The drawings are the most part of the experience; the way Baeken uses Black and White, and puts the action on paper is peculiar, and from it, everything comes alive. I guess the pictures speak better than my words though.'

A massive thank you to Lucie for her time and participation. You can view all the previous installments of comics shelfie here. Next installment will be up in a month.
Posted by Zainab at 00:35