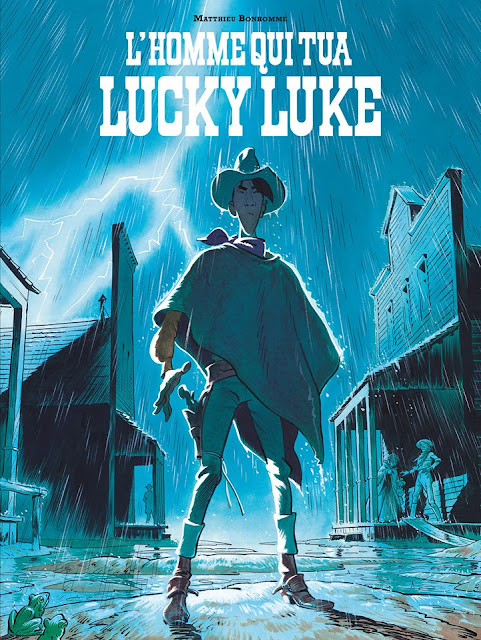 As regular readers of the blog will know, this is absolutely the kind of place where we gaze longingly over pages of beautiful comics in languages we can't read or understand. In that vein, today I'd like to share with you the stunning cover and a couple of pages from Matthieu Bonhomme's upcoming 'The Man Who Shot Lucky Luke.' Due to be published in French in late April, the Bonhomme volume -which he has also written- is intended as a stand-alone, tribute book in celebration of Lucky Luke's 70th anniversary, and is unrelated to the continuity of the main series, The Adventures of Lucky Luke. Bonhomme's typically gorgeous work may be familiar to English-language readers via the Fabien Vehlmann-penned The Marquis of Anaon (currently being released by Cinebook), or 2013's William and the Lost Spirit, with Gwen de Bonneval. Bonhomme counts himself as a childhood fan of the 'man who shoots faster than his shadow,' and it certainly looks like he'll be bringing a different tone to the lighter, more comedic atmosphere generally found in the Lucky Luke books. Bonhomme's masterful at backgrounds and environment and using them to imbue emotional notes and set a specific pitch -something which is clear from even the few pieces shown here. That it all looks so attractive is the cherry on the cake.

Created in 1946 by Belgian cartoonist Morris (Maurice De Bevere) as both a parody and an homage of the cowboy character prevalent in westerns, Lucky Luke began life as a strip in the pages of seminal French comics magazine, Spirou. In 1955, Morris began a working collaboration with René Goscinny (best known as the writer of Asterix) that would last for over 20 years and see the comics propelled to the peak of their success, and translated into 23 languages worldwide. Goscinny also directed and co-produced three animated Lucky Luke films, and the books have been subject to a number of live-action film adaptions -the most recent of which was in 2009 and starred Oscar-winning actor, Jean Dujardin- and cartoon series. The comics often reference various real and fictional western events and figures such as Calamity Jane, Jesse James, Billy the Kid; actors Lee Marvin, Jack Palance, and others, and the title of Bonhomme's book again suggests a spin on 'The Man Who Shot Liberty Valance,' the 1962 film starring perhaps the man most famous for playing cowboys on screen: John Wayne.

In addition to the Bonhomme book, publishers Dargaud have planned a spate of events to mark Lucky Luke's 70th anniversary throughout 2016: another tribute book by Guillaume Bouzard, a major exhibition with over 100 of Morris' original artworks which launched at Angoulême (and will run until September); an art-reference book titled L'art de Morris ('The Art of Morris'), and a luxury reissue of Morris' Phil Defer, the 8th Lucky Luke adventure. A special edition of Spirou, devoted entirely to the character is also in the works, and various books in the series are to be offered at special low prices. The celebrations will culminate in a change on the main Lucky Luke adventures, with screenwriter Jul taking over the scripting reins, but will continue to be drawn by French artist Achdé, who has been illustrating the books since Morris' death in 2001. 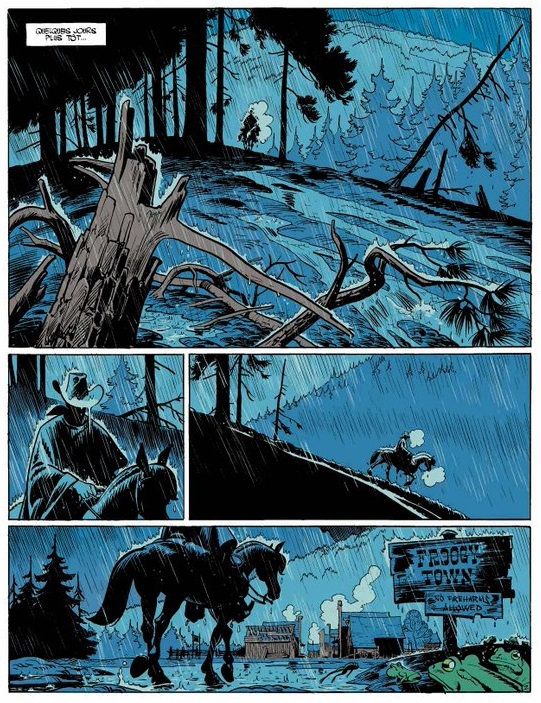