'See You Next Tuesday': will the real Jane Mai please stand up? [review] 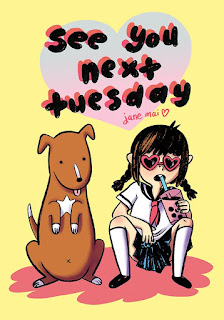 See You Next Tuesday by Jane Mai, Koyama Press


Somebody sent Jane Mai a potato in the post at the end of last year. In a series of posts on Twitter, she discussed how embarrassed and disturbed it made her, even as she attempted to interpose the incident with humour and kindness. The struggle between mortification, admonishment, and de-escalation was palpable. It's indicative of one of the focal issues in See You Next Tuesday, Mai's new collection of comics, where in addition to dealing with the perception and expectations she has of herself, she's also contending with the ideas and overtures people have of her -very often via the internet- and the ways in which these interact.

This notion of identity is continually kneaded at throughout the book: at the outset the reader is introduced to a number of 'Jane Mai' personas and characters- exaggerated representations of real and fictitious facets: there's separation and alignment. It's an ouroboros of introspection built in a hall of mirrors that -like her humour- acts both as a form of defense and defiance: in which the real Jane Mai- the truth of Jane Mai, can never really be got at. That allows for catharsis and autonomy of expression on Mai's part, and room for interpretation on the reader's behalf, without imposing a rigidity of meaning on either.

"Jane Mai was a product I made and sold"


While the relative 'democracy' of the internet has allowed people to bypass instituionalised gatekeeping to some degree, the transition of culture from 'in real life' to online remains the same (if not worse in that it facilitates rampant, unchecked abuse). Mai is one of many contemporary artists who have built followings after publishing work online, a feat that often requires a specific level of engagement and giving of oneself in order for it to be successful. The nature of that interaction can feel more direct and personal to the audience, fostering (with regard to female creatives, especially) entitlement and attempted ownership. There's a sense of people playing a part in your persona, a 'we made you' mentality; a collective Frankenstein-ing. Responding to your audience in ways they expect or don't expect is still a response created by the audience, and any giving is parcelling away parts of your self. Ultimately, there is no control over consumption and context in anything that a person chooses to share online. Thus the notion of authorial persona becomes non-existent, as does the notion of personhood. Mai attempts to subvert and turn this digital gaze on in itself by offering packages such as 'the Jane Mai girlfriend experience' ("a box full of garbage") or a t-shirt reappropriating abuse: "Somebody called me a cunt once on the internet. Isn't that weird you don't even know me! That's when I started making t-shirts that said: 'Cunt is such an ugly word. I'm so pretty though.'  And it was a bestseller. "

"I'm sorry I'm not your manic pixie dream girl. Let a bitch have some gravitas okay."

See You Next Tuesday is interjected with scrawled notes, ruminations on events, anecdotes, and quotes, and these break up the comics nicely. At 114 pages, it's not an excessively lengthy book, but it feels dense in a one-sitting read. Part of this is due to Mai's thin pen lines filling the 4/9/12/15-panel grids and requiring a greater concentration (she uses ink too, but the bulk of the strips are done in pen), and part of it is simply the range and depth of the material. The art appears quickly dashed off, yet that lack of polish somehow frees up topics to be addressed with rigorous, incisive attention: Mai's relationship with her parents, the tying of self-worth into looks and employment, sexuality, depression, her relationship with clothes, stranger encounters, sex positions -everything is engaged with wit and intelligence. Her humour ranges from toilet to black to absurd, synthesising with the loose, expressive style to convey a gamut of emotions; and her command over it is total. Mai seems genuinely, easily funny and it's key in making the subjects she discusses accessible, viable. See You Next Tuesday is a showcase for Mai's extensive abilities, and the most comprehensive evidence yet of her significance as one of contemporary cartooning's most capable talents. 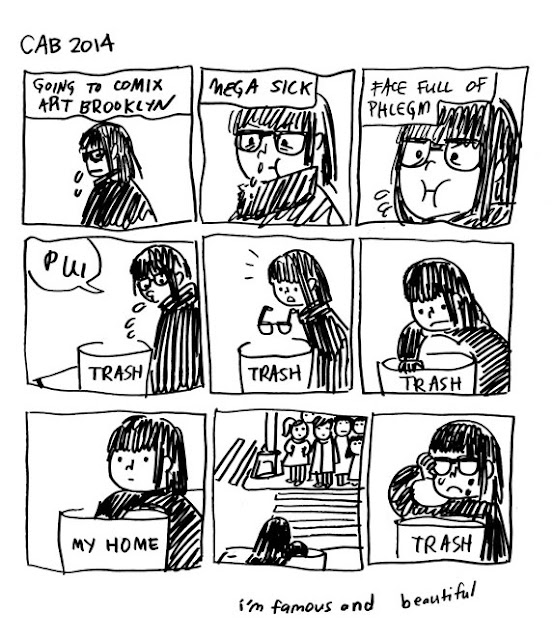 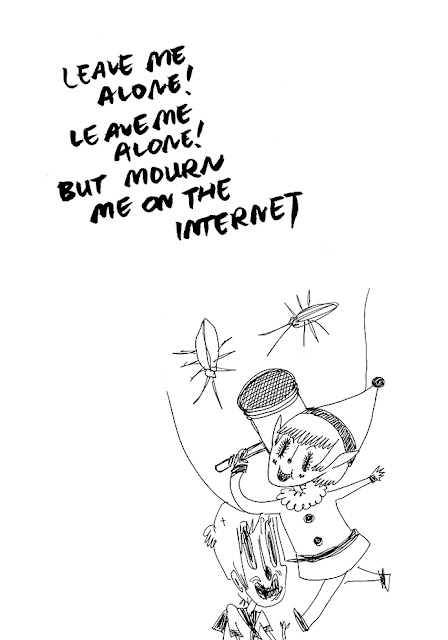 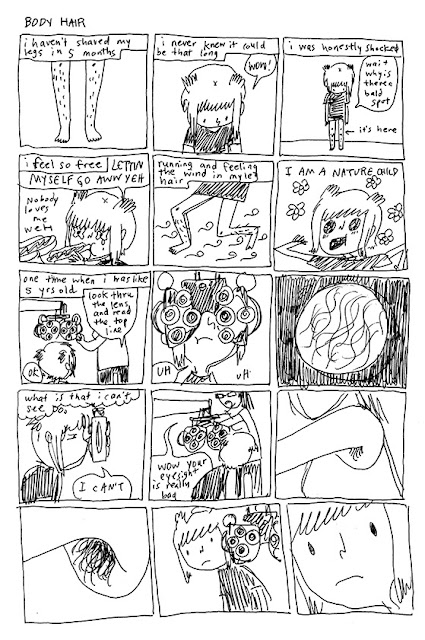