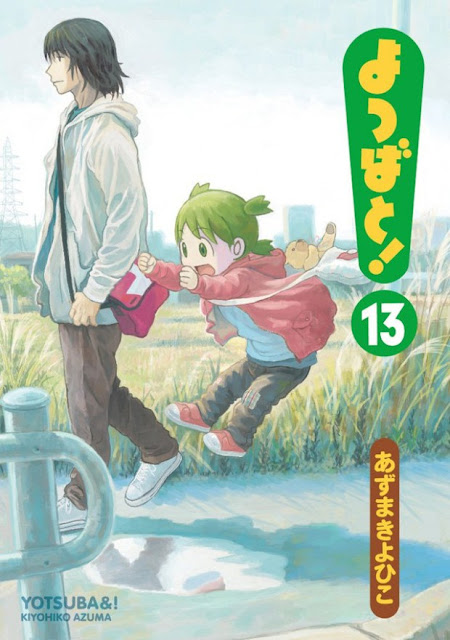 The best comics news of 2016 was announced earlier this week: Yen Press announced they'll be publishing the 13th volume of Kiyohiko Azuma's Yostuba&! in English this May. Many Yotsuaba fans -including (especially) myself- were hoping for exactly such a quick turnaround after book 13 was released in Japan in November last year. It's been a bit of a wait (a wait that always feels longer when it's something you enjoy and anticipate): that marked a 2 year gap between collections, with volume 12 published in Japan in November 2013. As far as I can establish, that seems to simply be down to Kiyohika Azuma producing story 'chapters' at a more leisurely pace; the chapters essentially read as individual stories, and are serialised in monthly magazine Dengeki Daioh before being collated for book publication.

Here's the official solicitation from Yen Press to whet your appetite- it looks like readers will finally get to meet another member of the family in Yostuba's grandmother: 'Fresh off the excitement of her camping trip, Yotsuba initiates a very productive session of sandbox play in which she instructs Fuuka how to properly run a bakery. But even more exciting is a visit from Grandma! Yotsuba learns how to value and enjoy cleaning, how not to be rude when hoping for souvenirs, and most important, how to cope when Grandma leaves. But don't worry, she'll be back someday!'

Yotsuaba&! follows the everyday adventures of a 5 year old, green-haired girl, who lives with her single father. The cast of the comic is bolstered mainly by the three daughters of the family next door where she spends a lot of time, and also by Yotsuba's dad's friends: the very tall and aptly-nicknamed Jumbo, and Yostuba's mortal enemy, the younger Yanda. There are many 'slice-of-life' mangas, but a recent re-reading of the series confirms Azuma's Yotsuba as truly special. It's one of those very few comics where the tone, pitch, characters, pacing, writing, and cartooning all coalesce in a reading experience that's so completely fluid and natural that it's unquestionable. To make the mundane interesting is a tough task; to make it immersive and joyful yet still believable is masterful. The tilt of 'see how wonderful the small things in life are through a child's eyes' could so easily tip into the twee and trite, but Azuma avoids this through sheer strength of writing: Yotsuba is unassailable. And it's incredibly funny: how often is something still laugh-out-loud worthy the second time around? Azuma's cartooning is really, really good, too- this is most evident in the way he conveys changes of expression- a sequence in which Yostuba breaks something and her expression moves from sweaty guilt to shifty-eyed evasion to outright panic, via a few panels and an alteration in brow lines, is superb.

Ultimately, though, Yotsuba is joyous. As much as art hopes to elicit a reaction from the reader, to actually, honestly *feel* something from a work is rare. That that emotion is a positive one simply makes it all the more special. Ostensibly, what I'm saying is: this comic will improve your life. Get on to it now for instant results.

(via comicsworthreading)
Posted by Zainab at 11:21