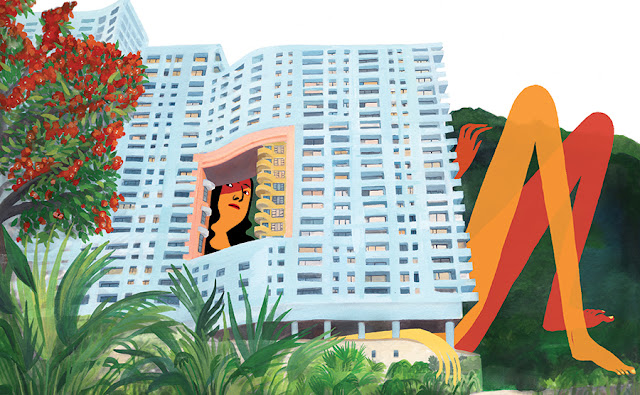 Early this year I asked the excellent cartoonist and illustrator Eleanor Davis if she'd like to participate in Comics & Cola's ongoing comics shelfie series, which sees cartoonists photograph and discuss their book and comic collections. 'I’m going to be traveling for the next 4 months,' she replied, 'I’ll be away from my comic books! I could either wait until May if that’s cool with you, or I could do a comics shelfie at my folks’ house with my mom & dad’s comic collections, which would be neat because I grew up with a lot of those comics.'  As much as this feature was conjured up to take a nosey around what artists read and are influenced by, one of the aspects I've come to like most about it is not only how peoples collections reflect their personalities- from Michael DeForge's crate system to Sophia Foster-Dimino's meticulously organised mini-comics- but also how individual and varied the approach to putting together the feature itself is. So when Eleanor suggested a 'family shelfie' (of sorts) I was pretty stoked. When she emailed me submission, my jaw definitely dropped open in envy: growing up around such a range of comics seems like a dream.

I love Eleanor's work; she produces comics that are thought-provoking, nuanced, and beautiful; and her use of shape and colour is one of my favourite things to see. But enough waffle, handing over to Eleanor:

'I spent the winter visiting my parents, Ed & Ann Davis. They aren’t collectors; they enthusiastic readers. They love books and they love comic books. This is a very incomplete idea of all the comics they own, because their comics are scatted all over the place, with lot of them packed away in boxes under beds and in closets. 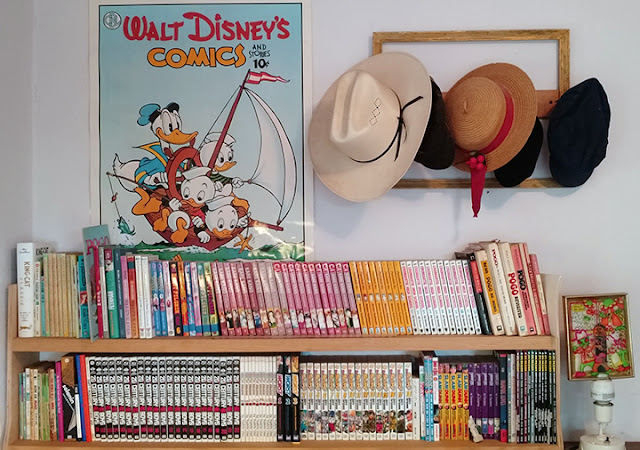 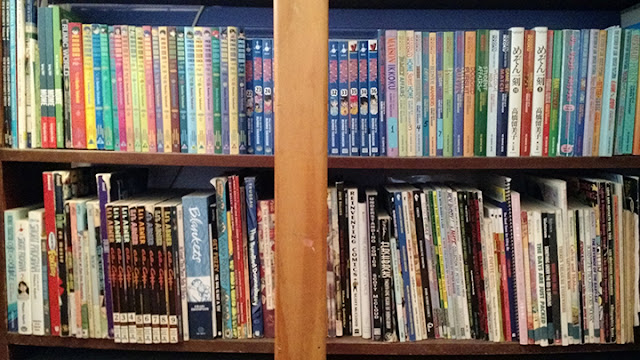 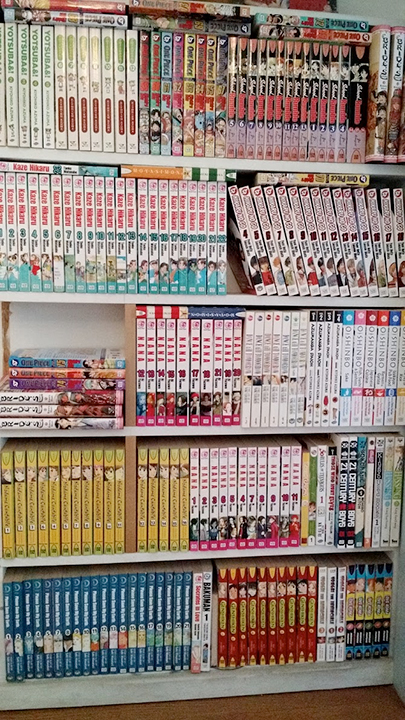 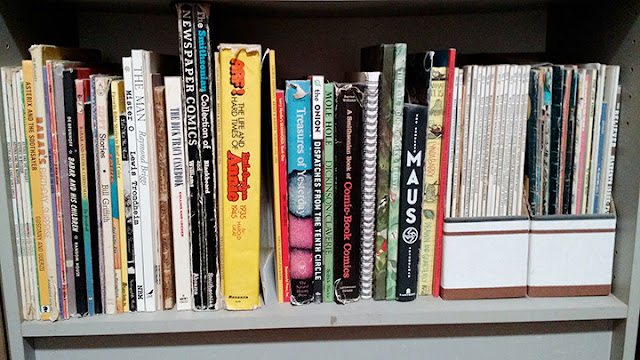 My mom and dad both read a lot of comics growing up. There were comics they’d read in the paper – Alley Oop and Lil Abner and Pogo. Their moms would buy them floppies like Little Lulu and Donald Duck comics from the grocery store for 10¢. Mad Magazine with Spy vs Spy and Don Martin was 35¢, and there were older kids around who had the back issues with Bill Elder & Wally Wood.
I grew up reading ancient floppy Little Lulus. My mom had especially loved Little Lulu when she was a kid. She could tell that there was one artist that was particularly good – the John Stanley Little Lulus – and she would seek those out. I didn’t read my mom’s childhood collection, though, because my grandmother donated them all to children in the hospital. When my parents were in their 20s my dad started looking for Little Lulus to give my mom for Christmas & her birthday. By the time I was little they had a filing cabinet full. I had to ask permission to read them, lay them out flat on the floor, and turn each page carefully.


The Another Rainbow collection of the John Stanley Little Lulus started coming out in the late 80s, and they were how my younger sister learned to read. The first words she could read were “HAHAHAHAHA” and “HOHOHOHOHO.” 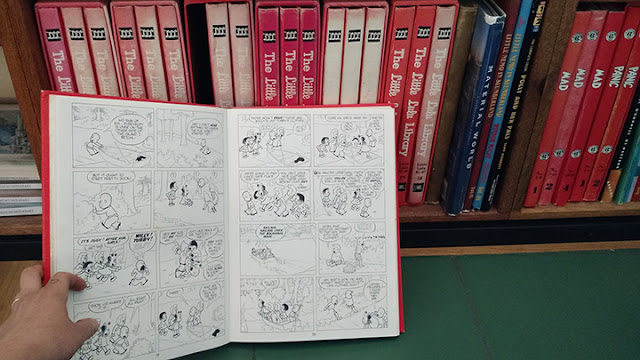 My grandfather – my dad’s father – loved comics too. I’d read Bill Blackbeard’s Smithsonian collection whenever I was visiting them, and Kin-Der-Kids, and Dick Tracy. 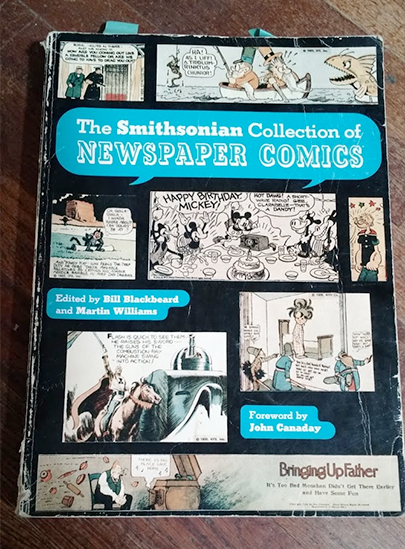 My grandfather had bought all the Pogo collections when they were first coming out, and my dad had them up high in a big tupperware container.  I had to ask permission to read these, too, and I had to be even more careful with them because all their backs were broken from my father reading them when he was a little boy. My folks were always looking for reprints of their old comics that would be OK for me & my sister to trash. 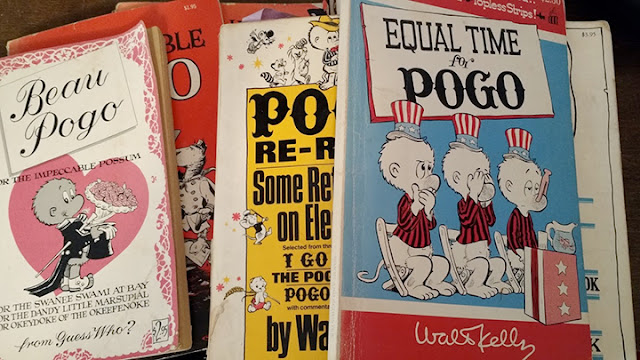 My dad had gotten into underground comics in highschool. He visited a friend in Seattle and came back with a bunch of Zaps, and a pair of purple sunglasses. He collected underground comics all through his teens and 20s, and has a whole longbox full. He didn’t let me read his underground comics until I was 18, and as soon as he gave them to me I went out and got really drunk & came home and vomited on them. They were upright in the box so the vomit was able to hit them all (luckily they were all sleeved). I can’t find these to photograph because my dad’s hidden them away again, which seems wise. 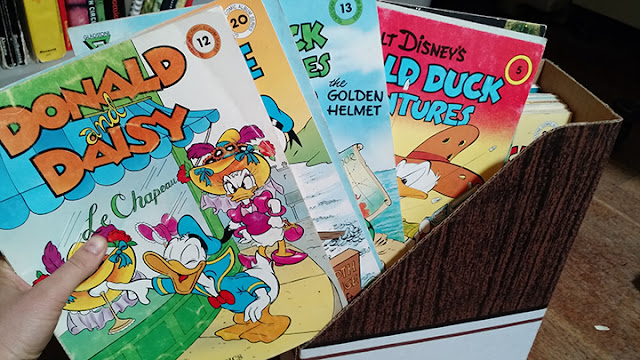 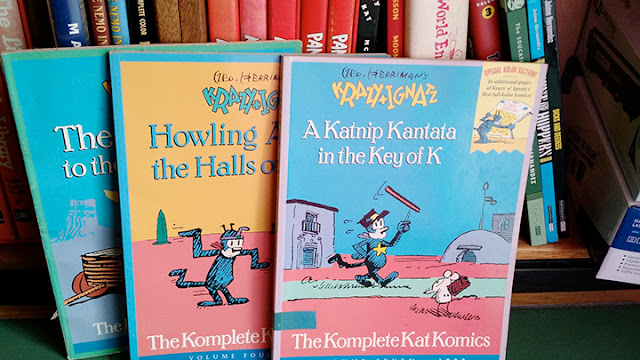 We got our first collection of Calvin & Hobbes when I was 5 years old, and it was memorable because it felt like the only modern American comic my parents would admit to being good. They are snobs. 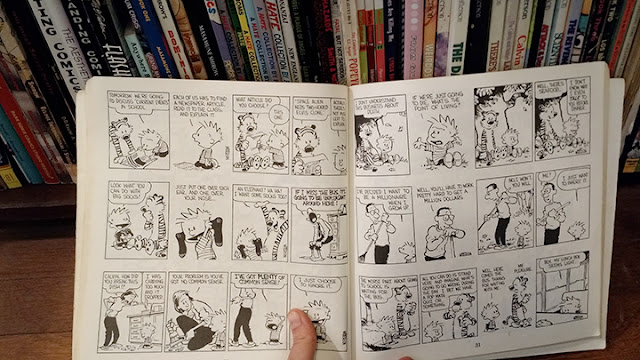 Because my folks are readers, not comic book nerds, they have a lot of comics most nerds don’t think of as comics.  My mom especially seeks these out. 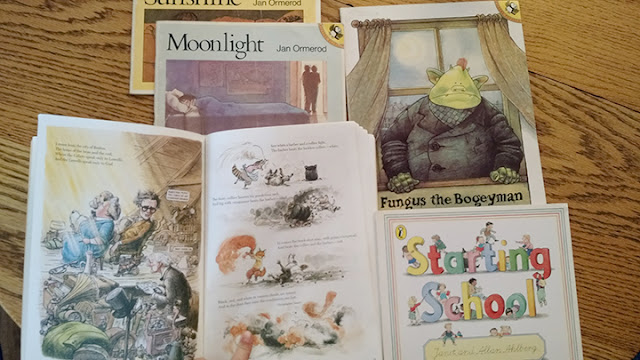 Reproduction of the Chōjū-giga, a 12th Century Japanese scroll of frolicking animals.

When I was around 10 my mom & dad started checking out anime from the local video store. My dad got heavily involved with fansubbing communities online, trading videos through the mail, and then from there got into manga. We loved everything by Rumiko Takahashi, especially Ranma ½ and Maison Ikkoku. Dad has read Nausicaä of the Valley of the Wind dozens of times. I wasn’t allowed to read Akira until I was in my mid-teens, and my dad paperclipped the section where Tetsuo drugs, has sex with, and then explodes a bunch of young girls so I wouldn’t see that part. Initially my folks bought whatever manga they could find, until there got to be so much of it that they could only keep up with what is very very good, and shoujo, which is my dad’s favorite. 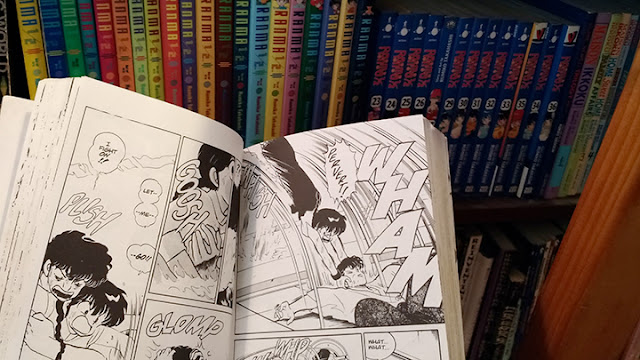 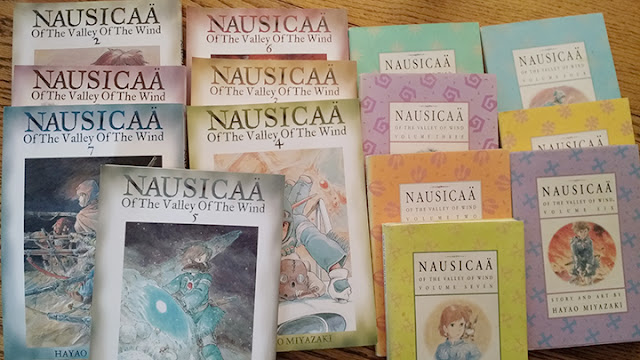 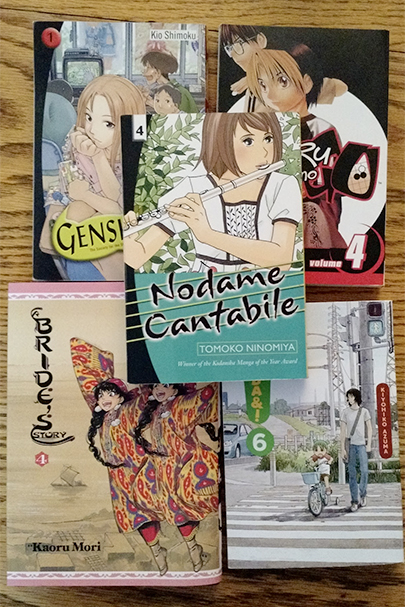 Some of my dad’s favorite comics at the moment - Genshiken, Hikaru no Go, Brides, Nodame Cantabile, and Yotsuba! 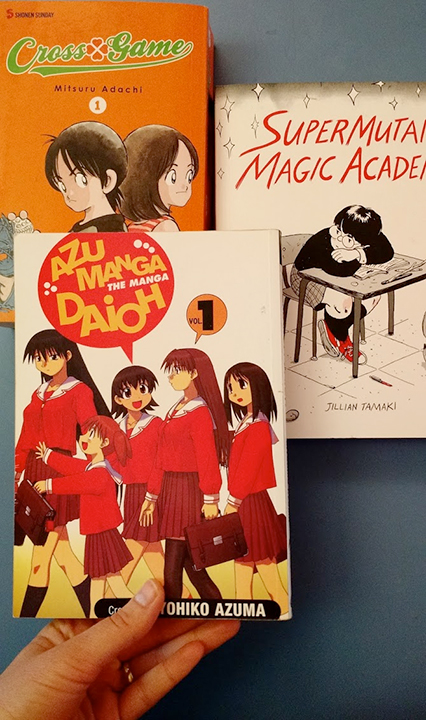 A massive thank you to Eleanor and her parents for their time and participation. You can view all the previous installments of comics shelfie here.
Posted by Zainab at 10:26