Viewed through the insipid activities of its titular character, Ben Gijsemans' Hubert is a treatise on the accepted ordinariness of complicit, pervasive socio-cultural misogyny. Hubert spends his days visiting museums, spending hours gazing at pictures of women, taking photographs of paintings and sculptures, then returning home to upload the images onto a computer in order to replicate them himself. He consumes image after image of placid, silent women, absorbing their bodies part by part, their looks, their lack of agency, before cyclically perpetuating it in both literal reproductions and general outlook.


Gijsemans doesn't question the impact of art on Hubert's thinking and behaviour, as much as he presents it, and ponders its extent. It's an intravenous effect: the permeation of continually repeated imagery, narratives, and ideologies to which Hubert's been exposed since birth: from family, friends, workplace, films, books, advertising, galleries, and beyond. Hubert doesn't seem to have ever thought to challenge or question these mores because to him there is no delineation: this is 'normal.' It's what he's seen around him all his life, so it's real and therefore true. But there is a point where apathy becomes cultivation of ignorance, where you become capable of making choices and, accordingly, accountable for them.

Gijsemans forms an arc of encounters which see Hubert's predilections tested and reach a cusp of possible change. The first is with a young, (silent) beautiful, blonde in the building opposite who he regularly, voyeuristically watches from his window, until she catches him taking pictures of her, and draws the curtains. Then, while at a museum, he's approached by two women, asking him to take their photograph: something he doesn't want to do. His discomfort seems to stem from them simply engaging with him on a superficial level, i.e. talking to him, and the fact that in asking him to take a picture of them, they remain the active participant, retaining control of the image and themselves. On the heels of these rejections and assertions comes a slightly increased cognisance: he notices 2 other men with cameras, one whom he mistakes as surreptitiously taking pictures of him, and the other simply photographing paintings, much as he does. Hubert is disturbed at both potentially becoming the object of a man's gaze (an association which would indicate that, clearly, on some level he recognises the tilt of his own intent), and the idea that he is not alone in his proclivities: he doesn't own or possess these images of women reconstructed for mass consumption. 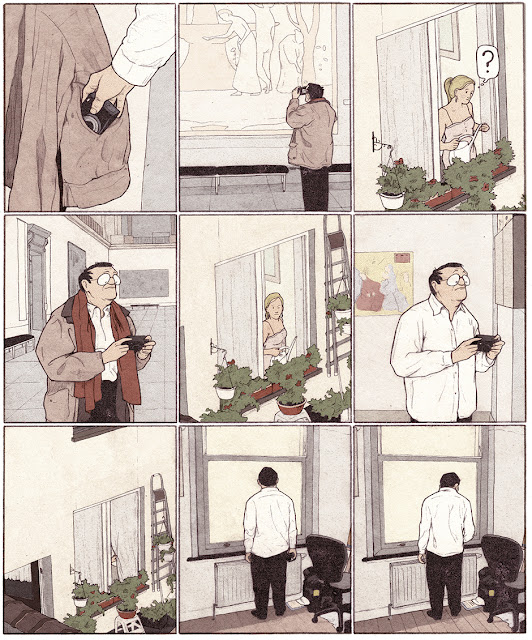 This series of events leaves him perturbed and unable to draw, leading to the third, most significant encounter. He accepts an invitation for a drink from his neighbour, Mrs Vandermeer, whom we have previously seen him avoid. Both understand that this is a euphemism for sex. Mrs Vandermeer appears to be around his age, confident and smart. When she disrobes and lays in bed, Hubert stands at the door fully clothed, repulsed and again inert. Gijsemans depicts his gaze deconstructing her in small, tight panels of body parts: a breast, a thigh, an arm -much as he deconstructs Manet's Olympia, and finds her wanting. He leaves. He chooses to retreat to his fantasy. Hubert's unhappiness doesn't just derive from his expectations not being met, but his inability to adjust those expectations due to fear. A fear of change, of self-examination. A fear to challenge what he's learnt -directly and otherwise-; a fear of losing the position of comfort in which he lives. His fragility and ugliness would rather ingest and believe in visions of nubile, young, paper women than consider sleeping with a real woman his own age.

One of the most interesting aspects of Hubert is Gijsemans' use of 'fine art' to frame this discussion, more so when coupled with his stylistic choices. There's an inherent irony to drawing in this very beautiful, technically adept way to comment on the role of endemic sexism within art -messages are embraced and dismissed depending on their packaging. Gijsemans' undeniable skill meet established standards that serve to 'legitmise' his work and its concerns. More pertinently, it floats the issue of classism within art. Are we to parse off Hubert a harmless loner, isolated in the noise of modern city life, simply because instead of thumbing through magazines or leering at women in the street, he takes in 'high art' and engages in 'soft' creeping? Does the fact that Hubert likes to watch old, black and white movies excuse his 'watching' and taking unwanted pictures of his neighbour? Is it our interests that set us apart, or our actions? Is it okay for him to violate her privacy in this way because he's 'inspired' by her beauty? Do we align 'nobler' pursuits with noble intentions? What is it, exactly, that makes a pursuit noble?  Are we to associate the perpetuating of sexist ideals only in correlation with 'popular culture' and those who imbibe it -a handing off of base ideas to base mediums and base people? Is one area more culpable in the fostering of these ideologies than another?

By appearances, an educated, healthy, and self-sufficient white man, Hubert may not be viewed as overtly damaging, but he is absolutely part and participant of the mechanism of ubiquitous patriarchy, exemplifying the increasingly germane, contemporary problem of recognising and addressing socially-absorbed malignancy within oneself. Gijsemans surrounds him with a fine-lined, superficially beautiful, but dull brown and grey life that lacks any depth or vibrancy; boxed in by precise, regular panels. Hubert's failure to identify the dangerous nuances he precipitates means he fails, too, to realise that in his particular situation, it is he who ultimately suffers within the bounds of those very same constraints.
Posted by Zainab at 10:27