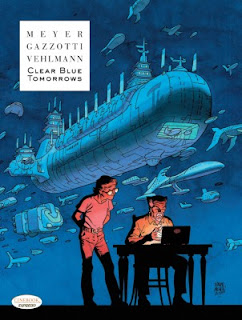 I wanted to point people towards 'Clear Blue Tomorrows' by Fabien Vehlmann, Bruno Gazzotti, and Ralph Meyer, published in September last year, but I feel a lot of people tend to sit on Cinebook. I've written previously about my appreciation of Vehlmann as a writer, and a common facet across the comics he produces with various people, is the space he gives the story and reader to swill around in. Clear Blue Tomorrows is the kind of book writers love: in a totalitarian technological future, engineer Nolan Ska travels back in time in a bid to stop the global corporate dictatorship of F.G. Wilson from ever happening. His plan? Help the man who rules mercilessly in the future to fulfil his first dream of becoming a successful novelist (he's unable to kill him due to an embedded chip that prevents all citizens from harming Wilson) .

It's a engaging read, made almost compulsive by the frightening state of western politics. There is no special event that makes Wilson who he is; he's just a horrible, shitty person. He has no writing talent, so Nolan applies himself to the cause, aware of what lies ahead if Wilson's path isn't diverted. He keeps at it for years, writing books and screenplays, taking no credit, while Wilson remains irredeemable: thankless, arrogant, demanding, and stupid, despite having success after success handed to him on a plate. So Nolan gives up. He's already a certain age, and having travelled back decades, he'll die before the bad stuff begins to go down. He decides to cut his losses and enjoy his life. After years of sacrifice, he chooses selfishness. The future can take care of itself.

In essence, Clear Blue Tomorrows is less an exploration of the characteristics of the opposing and opposed, and more an examination of Nolan's psyche. If the 'bad' are absolute in their unchangeable awfulness and beyond the reach of any reason, the burden of responsibility -to act-, shifts to the 'good' who become complex and compromised. How does a 'good' person respond to that wall of relentlessness? What do we expect of Nolan, and of ourselves? Ensconced in his bubble, the impact of Wilson's rule and the memory of those it will devastate begins to fade. The idea of sacrificing -to no guaranteed outcome- for something which isn't going to affect him loses appeal. In this manner, Nolan comes to represent the white moderate, ever reluctant to involve themselves in matters which may lead to a loss of their own position of comfort. Do you stop trying because it's hard; stop trying because it's not working out as you expected; stop trying because change is slow? To what extent duty, and at what cost? How much do you do, and how do you know it's enough? Does stopping mean giving up? And lurking somewhere at the centre of it all, is a whole separate discussion on the limitations of non-violent resistance in a time engulfed by violence.
Posted by Zainab at 09:30