Announced in late 2016, James Stokoe's 4-issue Alien mini-series is fast-approaching. As both a big Stokoe and Alien fan, it's one of the comics I've been looking forward to most this year. Stokoe is a big Alien fan; he'd been working on comics ideas for an Alien story in his own time as far as 6-7 years back when Brandon Graham shared some of those pencilled pages on his livejournal (shown below). It takes a while, but I like to think that as with both his Godzilla comic and his Galactus piece, which resulted in The Half Century War and work with Marvel, it takes a few years or so for the concept to gestate before some sensible comics person taps him to do the trade-marked thing. You can have immense passion for a thing and still not be good at it, so it's lucky Stokoe has talent by the bucket-load. I'm excited to see that hyper-detailed art and those mad gradients on ol' double-jaws.

Anyway, here's what I wrote about Dead Orbit for the Guardian in a comics preview last month: "Many licensed comic properties hum unremarkably along, but every now and again publishers wrangle a pairing worthy of notice. Such is the case for Stokoe’s upcoming Aliens mini-series, Dead Orbit. He is a rare cartoonist, gifted not only in technical ability, but also in eliciting fresh depth and pathos from popular characters without straying from their essence. With Ridley Scott releasing Alien: Covenant in May, this could well be a banner year for everybody’s favourite xenomorph."

Although after seeing the Covenant trailer, I'm having second thoughts. My high hopes for Dead Orbit, however, remain intact. There's only 2 things I consider myself fannish about, in that I actually *care* and have specific ideas about how they should or shouldn't be treated: Batman is one and Alien stories are another. With Alien, less creatures work better, a lone one works best. Sure, there's only so many times you can use this to trade on awe and fear, but unless the story facilitates it, using swarms of xenomorphs for no purpose other than numbers and the supposed 'cool' shock value of it is ineffective. The xeonomorph is an iconic design, but has become so distilled in power. I have the Dark Horse Alien omnibuses and many of the comics explore how the xenomorphs are captured and integrated as resources, which never made sense to me considering the whole perfect organism emphasis. Ultimately, where I stand on monsters is some of them you just cannot fight. And that's it. Which should be the case for Alien: you can kill them, and wrangle enough time to survive, but the bottom line is: they will get you. Anyway, enough of my incoherent ramblings; I'm confident Stokoe will do a good job as he's able to a) draw and colour magically, and b) marry his own sensibilities to character and story without compromising the integrity of either. I'm yet to read something of his I don't like.

Here's the official Dead Orbit blurby thing, and you can find some preview pages of the opening issue further down this post:

Dead Orbit finds Wascylewsk, an engineering officer, trapped in a space station after a horrific accident. Wascylewsk is forced to use all available tools—a timer, a utility kit, and his wits—to survive an attack from the deadliest creature known to man. James Stokoe (Wonton Soup, Orc Stain) writes and illustrates the series. Geof Darrow (The Shaolin Cowboy, The Big Guy and Rusty the Boy Robot) will provide a variant cover for the first issue. The first issue is out April 26th. 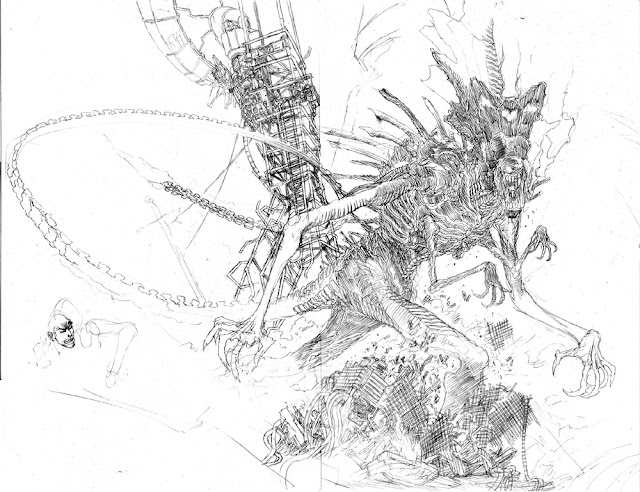 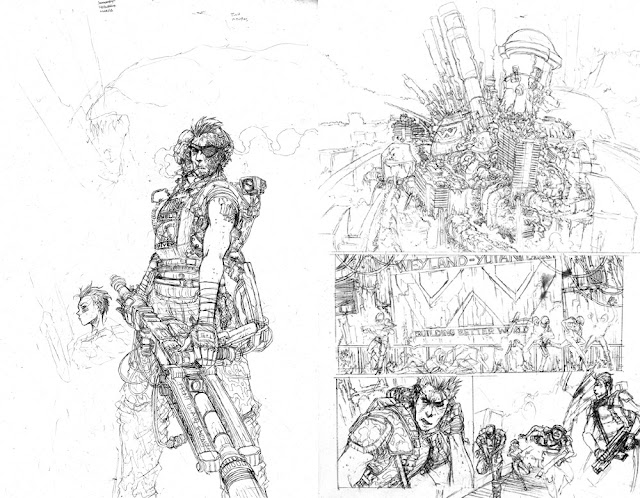 Interior pages from the first issue of Dark Orbit; for more, visit Paste who have an exclusive multi-page preview. 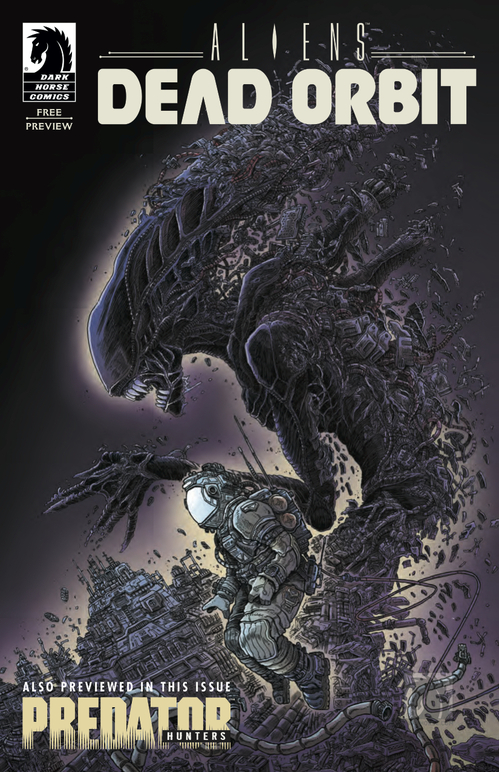 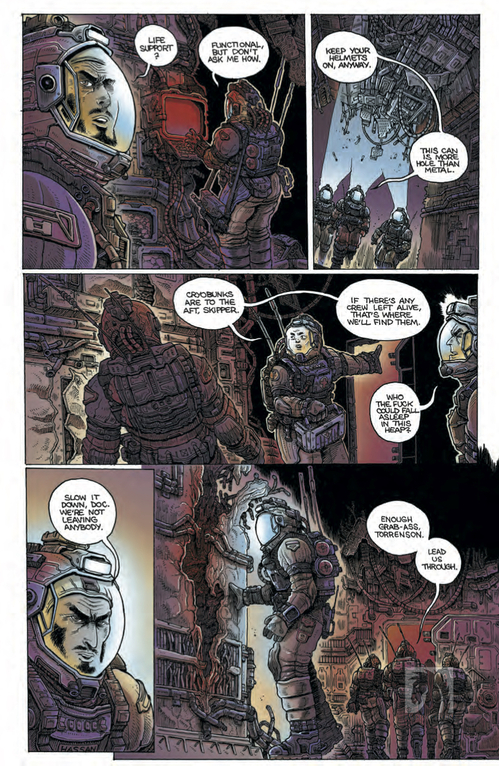 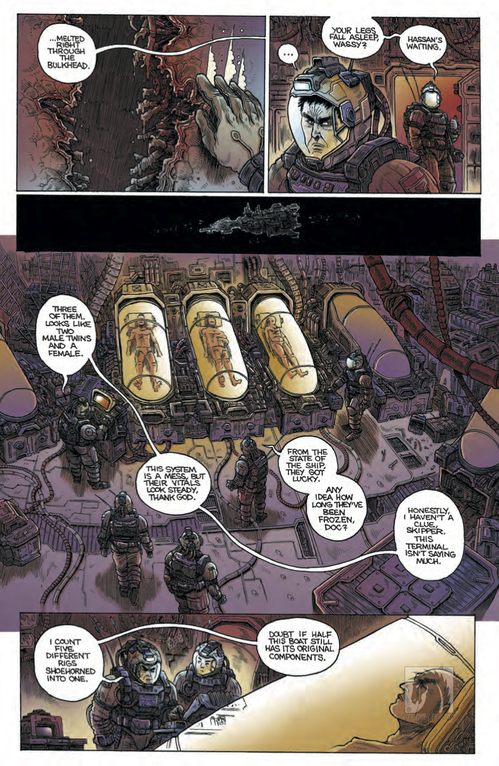 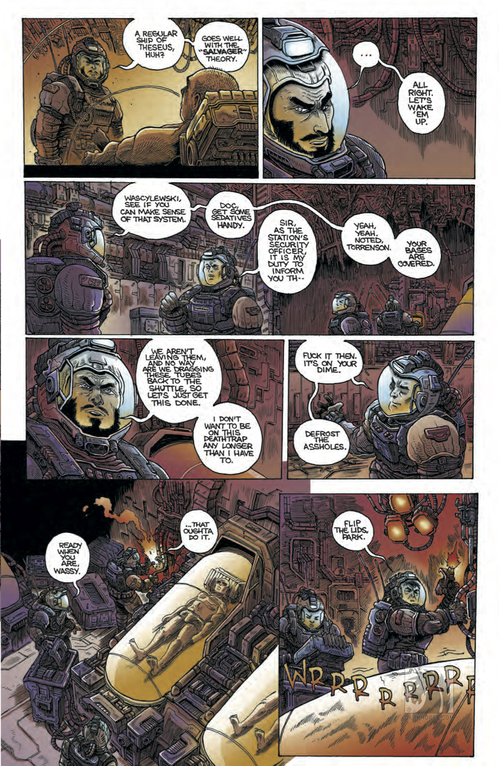 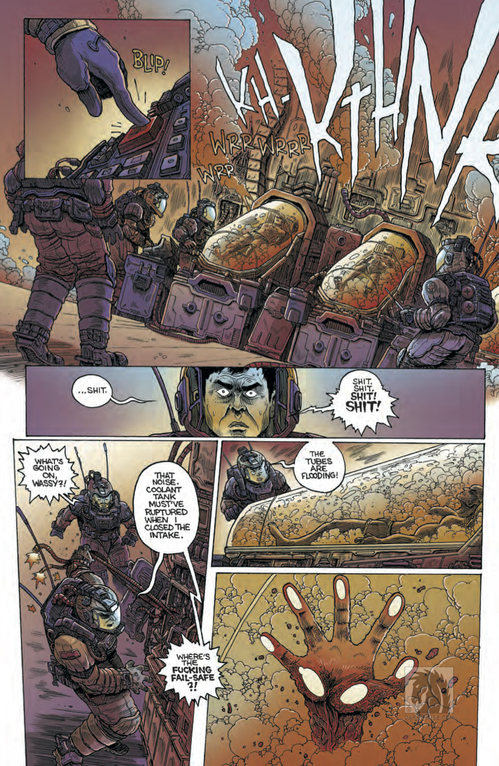