The secularisation of Satan

Examining how Alan Grant and Arthur Ranson's portrayal of Satan is informed by the shifting depiction and ideas of the devil in pop culture, and the secularisation of evil 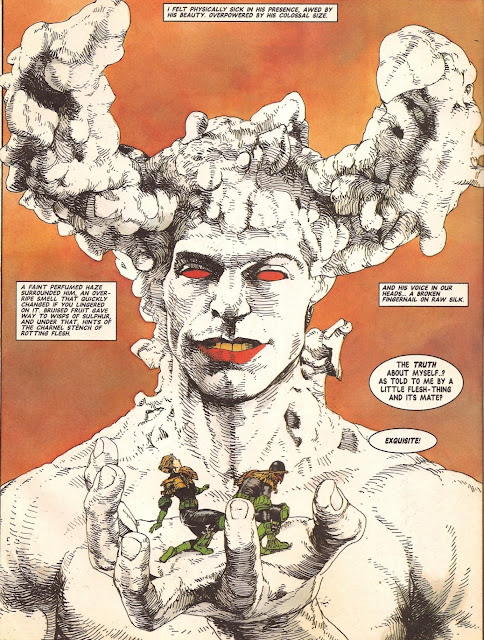 'Once I was Lucifer- bright morningstar. Well I think I was'

It comes from above. Encased in a vast rune-marked stone, a collision with an exploding spacecraft pushes the mysterious object's trajectory towards Earth. From the dust and flame of the crash-landing rises a colossal, winged figure: the devil. This is the premise of Alan Grant's and Arthur Ranson's Satan, where as bloodshed and madness engulf the land the psychic empath Judge Anderson must determine whether the alien being is indeed the devil, whilst pondering the ramifications of his existence on a metaphysical, spiritual level; and, of course, if and how the he can be overcome.

Reading about something is different to seeing it, so the reader's first visual encounter with Ranson's Satan is significant: his appearance alone allows us to glean certain symbolic inferences. He is a gleaming white giant, his horns molten marble: bubbled growths that extend from around his head like an incomplete crown-like halo. His eyes are searing fire-filled sockets, at once flat and bottomless; his mouth a sardonic scarlet smear. That he is represented by only these two colours is significant: red is connoted to danger, anger, and passion; while white is most traditionally bound with depictions of light, goodness, and purity. On the surface at least, he does not appear monstrous, his overall visage more reminiscent of Greek sculpture, an evolved gargoyle conveying specific ideologies; Ranson marrying mythological threads of angelic derivation, a fallen favourite, with currents of temptation and manipulation. His wings further reinforce those juxtaposing parallels: again harking to Lucifer, yet their leathery texture provides a contrast to the image of untouchable deity. They're organic, animalistic, binding him by nature to those he aspires to lord over. On initial approach he is undeniably impressive; Anderson feels 'physically sick in his presence, awed by his beauty.' He wants people to be seduced by his majesty, of how he looks. Ranson's exceptional draughtsmanship, with his lines and realism rooted in a traditionally-illustrative style, serves to anchor and add weight to this portrayal.

Upon arrival, Satan announces himself repeatedly, beading together a litany of names given to the devil. 'I am the Adversary... He Who Opposes. I am the Serpent crawling in Eden-- The Dragon-of Old--The Midnight Goat. I am the Prince of Lies... the Lord of Deceit... Betrayer Supreme. I am Diablos, and you must whisper my name!' He quotes from the Book of Amos and then pokes fun at the language 'Did I say that?... quite poetic in a bleak sort of way.' This meta-defensive, mocking rhetoric becomes a pattern throughout, a sneery finger poking at the narratives credited to him. But under the theatricality, there is also pride and assertion: there is power in names and he embraces the opportunity to claim the many bestowed upon him; to claim the history with which each is associated, the dread they inspire. The belief in these names and all that they encompass, is what powers him. It is the belief in his existence; in his influence. It help feed his myth -and so feeds him. It's how he defines himself. Facts are true whether you believe them or not, but faith is true irrespective of the integrity of the subject in which it is invested. From the offset, then, Grant has the devil toying with who he is; the repetition of names and faux-reluctance a first hint at an underlying question, if not doubt.

Accompanying this passage is a snaking full-page spread in which Ranson charts a visual history of devil interpretations encompassing shifting literary and theological concepts: here is Dante's and Dore's frozen colossus, a pentagram-inscribed Baphomet, the serpent himself, Pan, the dragoned Diablos, a pitchfork-wielding imp, the morning-star. 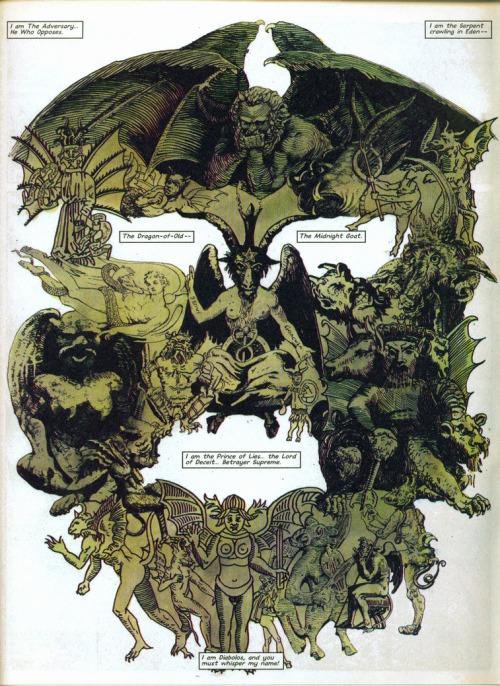 This presents the reader with a wad of cultural heft that acts to reinforce Satan's identity, whilst simultaneously highlighting its constant construction; the fragmentisation of a monolithic personification. Via the use of these references, Ranson and Grant draw attention to Satan's bluster, a performance that goes beyond pretending to be affected by crosses and incantations, or setting aflame a group of religious diplomats with an imperious look. His identity seems overly pieced together, too pat. With his physical presence on Earth causing wide-spread insanity and destruction, and the Judges at a loss as to what to throw at him next, this is what gives Anderson an in. She capitalises on that chink of doubt and insecurity. For an idea to have strength it requires belief, and it is humanity's faith in Satan's stature as this immense demonic force that allows him the refuge of a power fantasy. It's preferable to Satan to believe himself the big bad- it gives him billing. And it protects him from the reality of himself. As Anderson discovers, at his core he fears the cost of that mantle. He feels the weight of his actions. Her telepathic connection sees a scared and lost child sat huddled amidst vast fields of piled corpses, crying, 'It wasn't me honest!' Where earlier Satan leafs though mankind's history, revelling in the war and bloodshed he's inspired since his imprisonment, here are shards of guilt and despair, of loneliness. At some level, he is distant from the very idea of himself he ouwardly embraces, rejecting culpability.

Like Dante's Lucifer, he is caught in his own trap: stuck in the ice at the bottom of the ninth circle equally as powerless as the other sinners, instead of being a free and powerful being. It fits in with the theological notion that Hell is indeed self-inflicted.

Grant's and Ranson's portrayal of repression, trauma, and vulnerability is informed by decades of literature that increasingly drew parallels of Satan's standing with that of mankind's, specifically the similarities in nature. If the 15th and 16th centuries solidified his position as "the personification of evil, seen as the great enemy of Christ, the Church, and mankind: a horned, bestial, furry figure," the age of enlightenment in popularising reason began to consider the story of Lucifer's rebellion with greater nuance and depth. But it wasn't the diminishing thrall of Christianity alone that distilled the devil; as an increasingly secular society began to explore alternative causes of evil, the notion of good and bad as rigid pillars waned. Science and psychology made inroads in demystifying various medical conditions, with focus on rehabilitation rather than punishment. On a wider scale, this loosening translated into complexity of character; an acceptance of flaws. 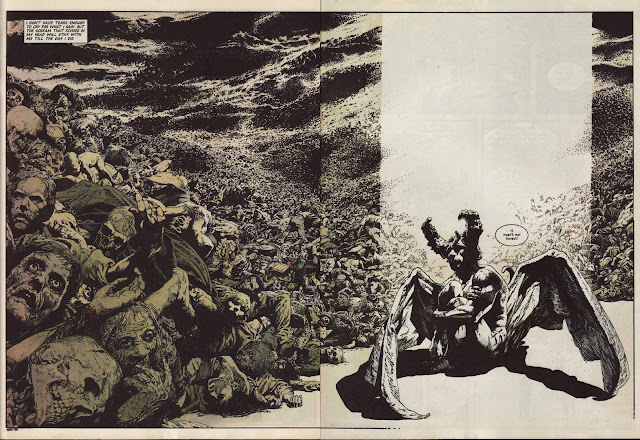 Thus this resulted in not only more sophisticated representations of the devil, but literal and figurative shifts of him as a bestial creature who is the enemy of man, to a more human and humanoid figure (most seminal among these was John Milton's Paradise Lost, which essayed Lucifer as a defiant and charismatic anti-hero granting him new perspective, and effectively reinventing modern conceptions along the way). He is inherently human in his rebellion; his flaws of pride and jealousy are familiar emotions. If all reactions stem from an action, then causality is applicable. The devil/evil is a reaction or direct effect- to the concepts of god/good. He is angry and hurt and wants to stick it to both God and man as those who have hurt him. He doesn't simply want to see mankind fall and turn, he wants to see mankind fall and turn to spite God, to prove his long-standing point over and over; 'This is what you chose over me, this is what you cast me out for. Look how weak and easy they are. Look how I can make them turn from you.' And he knows so well because he's the same. It's one long lashing out. He has motive. He can be understood. Satan became sympathetic.

If Faust and Chaucer seem a reach today, no matter; we've seen the devil as everyone from Tim Curry to Elizabeth Hurley to Al Pacino; as an animated robot in Futurama; as a used car salesmen in Reaper; a discontented Bowie/James Dean-esqe figure in Mike Carey's Lucifer; as a goat in Robert Eggers' The Witch. These incarnations embody the human character and experience: from comedic relief to tragedy, delight to desolation, as canny, seductive, triumphant. So not only are Satan's impulses and emotions known to us, repetitious cultural exposure of the devil as a personification of id took root, disseminating the potency of Satan as the ultimate murky, sinister bogeyman; an intravenous desensitisation realigning the devil as normal, and fundamentally, as something less adversarial.

Key to this is the de-weaponising of Satan's own power, and the shift from vengeful anger (an emotion people intrinsically recoil from) to misunderstood everyman, done over by the big guy. Few things reconcile people as much as shared resentment towards those deemed superior. In theory, Satan became specific, smaller, more successful, undergoing an ideological transformation accessible to all, irrespective of religious denomination. As the representation of the flaws of man he is ironically omnipresent. If God is within us then why shouldn't the devil be, too? He is of us, and thus easier to understand. And when we understand something, we no longer fear it. The devil becomes knowable, and knowledge is power. If you don't have it, then someone has it over you (Those qualities now instead rest heavily with God. God is powerful. God is knowing, yet unknowable. God in his judgement is man's adversary.). In knowing Satan, we aim to assert power over him, and therein lies his ultimate contemporary seduction: that he is one of us. He is legion: he is us all. 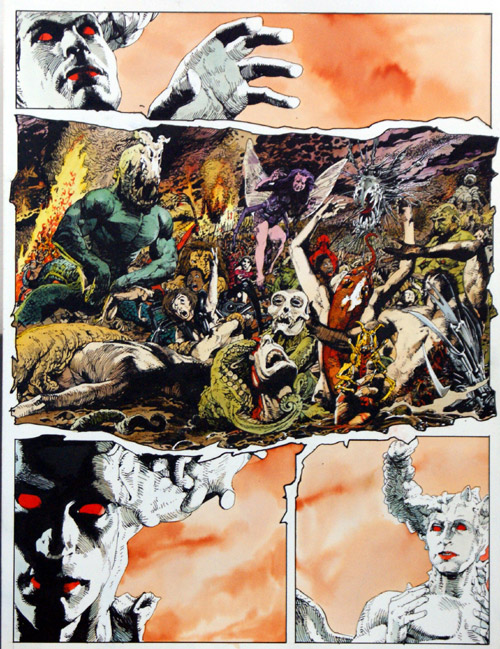 It is this evolution that Grant and Ranson's 1996 portrayal charts. Their is no definitiveness to their Satan: he exists within the multitudes. He exists as an individual entity and a symbolic quantification of evil, and as such has his own life in addition to those that are thrust upon him. Grant and Ranson provide us with a literal and allegorical deconstruction of this once proud and magnificent being who, in the depths of hurt, embraces the narratives and labels heaped upon him as a form of consolation. A creature who opts to mounts these projected stories as both reassurance and defence rather than confront the reality of himself, because 'to be weak is to be miserable'. He still matters, he is still worth contending with. Grant and Ranson's Satan is lost deep within those structures, at first purposefully and then for survival. It's no longer clear which came first: being called a monster, or the being of the monster. The parallel drawn is of a superficial inversion of man: a beastly exterior concealing the confusion within, as opposed to a benign exterior concealing the ugliness inside.

Grant and Ranson present Satan as someone who humans require to be separate, marked by contorted difference in order to fit with our idea, our need, of a looming, evil 'other.' Like a fire that never lacks for tinder, Satan is a golem brought to life by our pain, horrors, and weaknesses, created to cover our complicity. He gains power and import via the oxygen of fear. Not the fear of the unknown, but the fear of those deeds, that culpability, returning home.

"Nobody makes us bad. We get to choose between good and evil and we're all responsible for our choice. Even the devil.'

(An early version of this essay was published in Critical Chips)