There's a couple of new manga series starting English-language release in February that have my interest piqued. The first is Kei Sanbe's Erased (Boku Dake ga Inai Machi), published by Yen Press. Originally serialised in Kadokawa Shoten's Young Ace magazine between 2012 and 2016, the 7-volume story has undergone both anime and live-action film adaptations. Erased follows Satoru Fujinuma, manga artist and part-time pizza delivery guy, who possesses a mysterious ability that sends him back in time moments before a life-threatening incident, giving him the opportunity to prevent it from happening. The occurrence of a traumatic event in Satoru's present propels him eighteen years into the past, to when he was still in elementary school, and on the cusp of a kidnapping incident that took the lives of three of his childhood friends.


I'm not wild on the 'time-travel to change significant events' trope (although, as with anything, it depends on *how* its done) but the mystery element here makes me hope there's going to be something more going on. It's appealing to me also on the grounds that it's a wrapped-up, finite series (Yen Press will be publishing the books in 2 hardback omnibus editions), so I know what I'm committing to, while the optimist in me likes to think that limitation is indicative of the author's specific vision and therefore tighter plotting... The pages I've seen look pretty good: I'd not previously come across Kei Sanbe's work, and she has a very clean style that's a nice amalgam of cutesy and realistic. 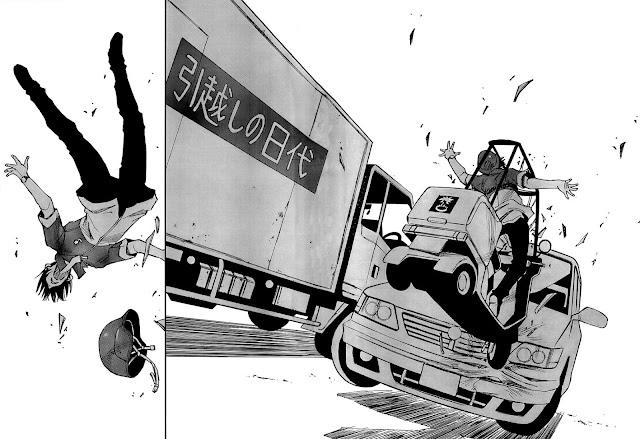 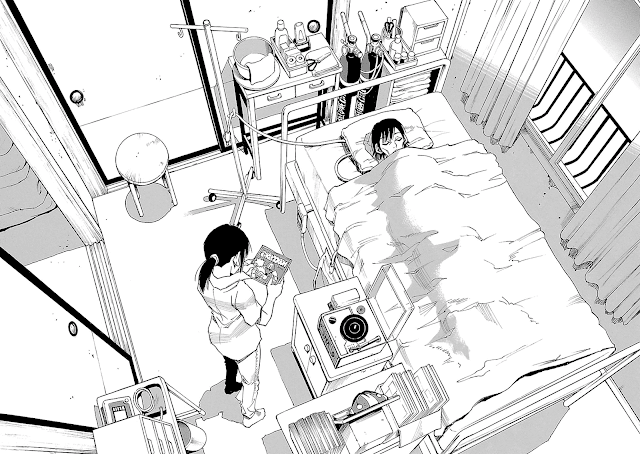 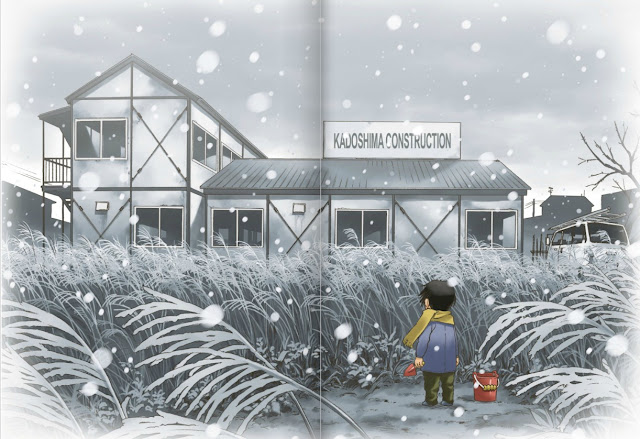 The second manga that caught my eye and the first volume of which releases in early February is the uniquely-titled Girl from the other side: Siuil, a Run (Totsukuni no Shoujo) by Nagabe [Seven Seas]. From what I can tell, this is a fairly new ongoing series, with volumes 1 and 2 published in Japan last year. I have this on pre-order, by virtue of that beautiful cover alone: the pairing of the smiling little girl and the tall, horned figure strolling through a woodland setting is intriguing, as is the appeal of the fine-lined art style (there's a Scandinavian, European vibe to it) in which it's rendered. I've been looking at some of the interior pages (shown below) and though they range from sparse to more full, they're atmospheric and attractive.

A magical fantasy set in a world that's split between the realms of Inside and Outside, residents of each realm are told never to cross over to the other side, for fear of great catastrophe. Somewhere beyond all this is a vacant village home only to a young girl named Shiva and her demonic guardian known only as "Teacher." 'Although the two are forbidden to touch, they seem to share a bond that transcends their disparate appearances. But when Shiva leaves Teacher's care to seek out her grandmother, the secret behind her mysterious living arrangement comes to light.' Each volume in the series will be released with a textured matte finish cover and will include at least one full-colour insert. 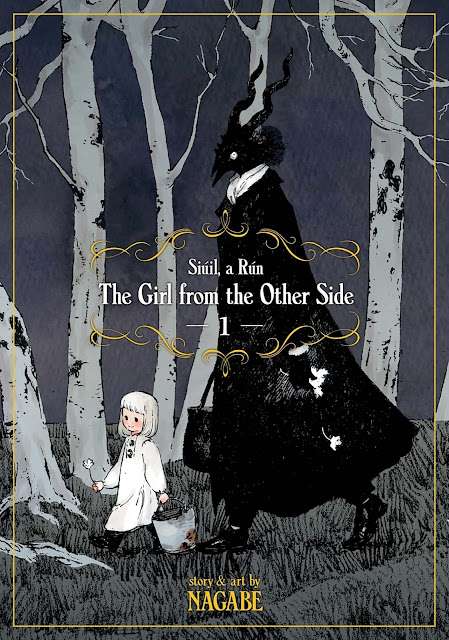 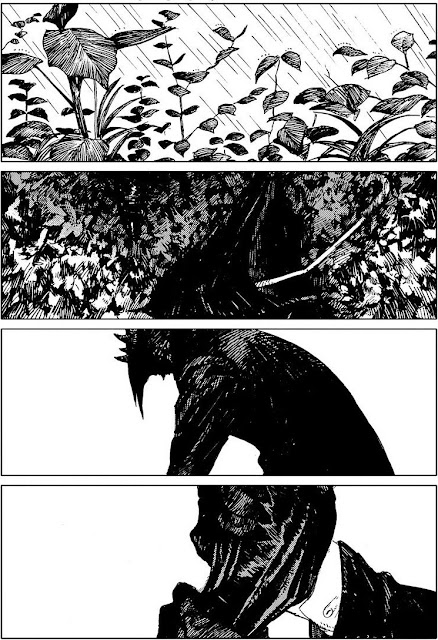 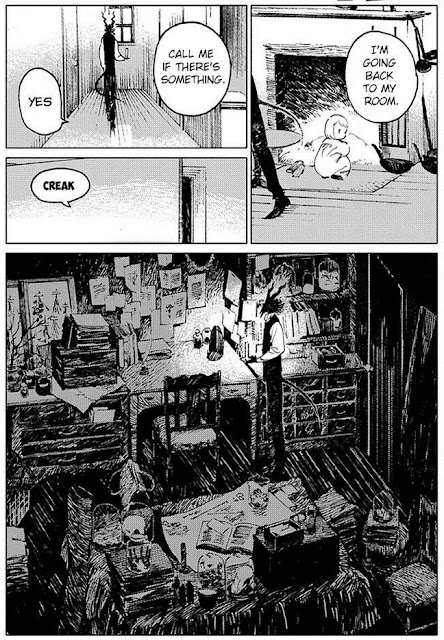 Spectacular Vermacular by Mathilde Vangheluwe [kuš komiksi]
Mathilde Vangheluwe has done a comic with everyone's favourite Latvian comics outfit, kuš! Newly released on January 27th, Vangheluwe is one of my favourite cartoonists, and I'm yet to read something by her I didn't like. I pre-ordered this as soon as it was announced, and I wish she put out more. Joining the set of a hip late late talk show, 'Spectacular Vermacular' sees famous Hollywood star Vlad the Cat remembers the glorious old days, in a bittersweet tale of an overwhelming Hollywood career. A new, full-colour comic from Mathilde is a good way to start the year.

The Interview by Manuele Fior [Fantagraphics]
The Interview is Fior's fifth graphic novel, and the second of the award-winning Italian authors works to be translated into English (Fantagraphics also published his '5000 Kilometres Per Second' last year). As beautifuly painted as 5000 KM was, it was also rather conventional, and I'm holding out for something beyond that here. The Interview is set in a future Italy of 2048, and brings together a seemingly familiar scenario: a fifty-something psychologist with a failing marriage and his young, free-spirited patient, Dora. It's the backdrop that prevents this falling into cliche. Strange bright triangles have appeared in the sky, purportedly bearing mysterious messages from an extraterrestrial civilisation. Messages that Dora claims she can parse with her telepathic abilities...

How exquisite do these pages look? 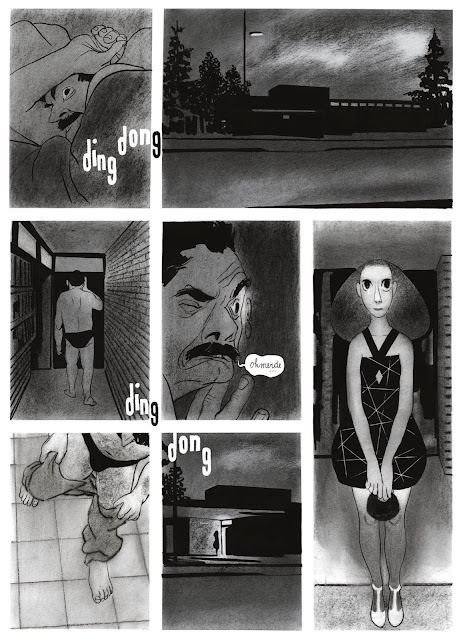 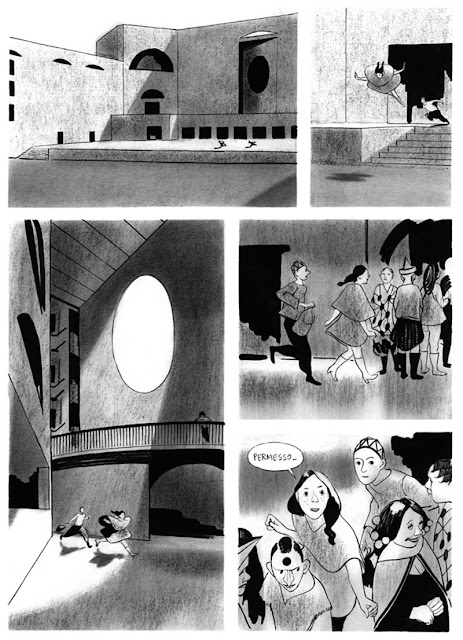 Speaking of Fior, he's recently done an A3 (I think) foldout poster comic, semi-inspired by Charles Gleyre's The Deluge. That looks okay, too.
Posted by Zainab at 08:00