A pocketful of webcomics

I've noticed a number of new comics beginning serialisation online, and thought I'd do a quick run-down of the ones that caught my eye. First up is Warm Blood, a new project conceived by writer Josh Tierney who headed up the beautiful Spera comics, later published in print volumes by Archaia. A high school murder mystery, Tierney has Warm Blood functioning similarly to Spera in set-up, with the brilliant Afu Chan again designing the main characters, and a host of artists illustrating a chunk of pages each. The first couple of chapters of the story are up now and feature artists Saskia Gutekunst, Joysuke, Jane Bak, Winston Young, Naomi Franquiz, Marina Julia,  Leiana Nitura, and Olivier Pichard, amongst others.

Penny is the new girl at public school, Greenwood High, where kids are being murdered at a steady rate: a body in the cafeteria, 2 in the pool. On the first day, Logan Filigree casually, almost wearily, confesses to her that he's the killer, although no-one seems overly perturbed by his admission, and life continues as normal, with more bodies piling up. Oh, and there may be monsters (cc: the giant lobster student who sits near Penny in homeroom). Warm Blood is clever in what it is and isn't showing the reader on the page, whilst also playing around with unreliable narration. Tierney has an affinity for slow-burning material, and I understand not wanting to hand-hold the reader, but the number of elements and ideas - magic, abilities, multi-dimensions, lots of characters, monsters, murder- stuffed in Warm Blood makes it initially somewhat stodgy and convoluted. It's interesting enough to stick with, though, and finds its feet in the second chapter as characters become more established and the meta-humorous tone settles better. The other thing that makes Warm Blood worthwhile is the array of talented artists within its pages, most of whom are new to me; it's a great way of discovering people to follow. Go check it out. 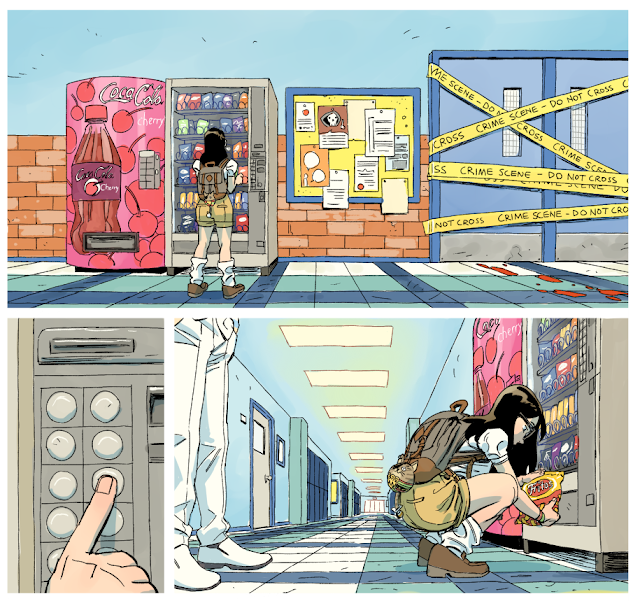 Next up is Mickey Zacchilli's Space Academy 123, which is a good 80 or so totally perfect pages in at the time of writing. Zacchilli's posting single page updates on a dedicated Instagram account and I highly, unequivocally recommend following it. Space is more of a dressing in Space Academy, with the focus firmly on characters and their shenanigans. The narrative revolves around 3 people in the main: Donna, recently graduated to somehow become principal of the academy when all she wanted was to be a space chiropractor; Andrew, an anxious, gentle soul, and the wonderfully-monikered Ashley Forgiveness, whose very being -from hair to internal monologue- seem to be plucked from the most shonen of manga. There's also the precocious Shandy (the youngest, the wisest), and grandfather computer (the oldest, the least fucks given), both of whom steal every scene they appear in.

I have a preference for strips which are a self-standing read whilst feeding into ongoing narratives, and Space Academy is a great example of that. All of Zacchilli's characters here are exceptionally well-written, with quirks and individuality, but no malice. Zacchilli's signature energy translates here to a joyful, fun exuberance that it's impossible not to be swept up in. Each new page brings a smile.  The manner in which she’s able to moderate the abstract density of her lines and mark-making to achieve those specific emotional and atmospheric beats is remarkable, and yet seamlessly done:  the entirety of the tone and pitch of the comic is just *there*.  It reaffirms my thinking that Zacchilli is one of the most overlooked cartoonists today. If there was one thing I'd urge you to read right now it'd be Space Academy 123: it makes me feel good about comics, and life. 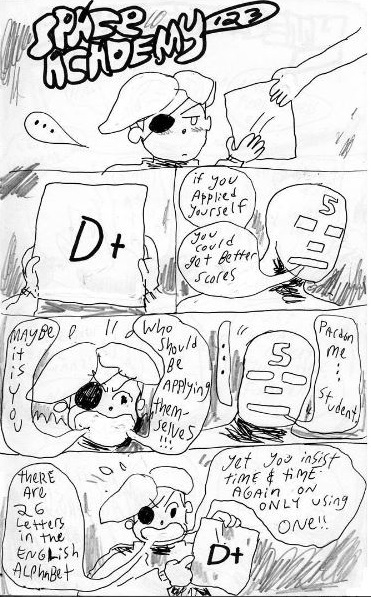 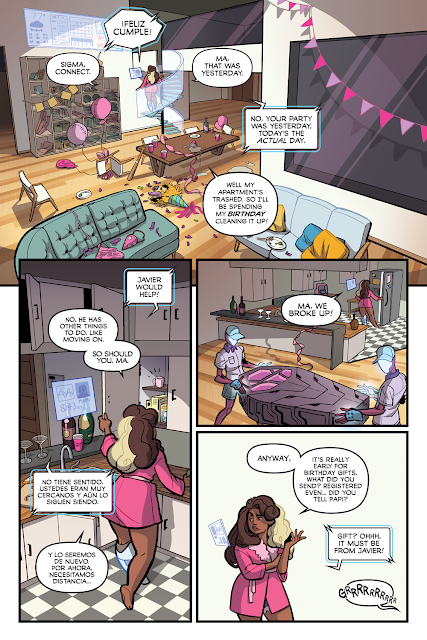 It's likely you've come across Michael DeForge's black-and-white effort Leaving Richard's Valley already. He's been serialising it on both his Twitter feed and a separate Instagram account, with the 4-panel, square pages serving both platforms well. It's well over 100 pages in and still going. The story follows a community founded by the mysterious Richard. Made up of animals and humans, all live together in the woody valley in relative harmony under Richard's rule. Water has to be purified in a certain way, toxins removed from the body and environment, Richard's regulations followed. Everyone seems united in their love and adoration for Richard, who we're assured is great, a movie star, pays for your piano lessons, kisses your mum, and when he eventually turns up, sorta looks like an sinister anime He-Man. This peace is disturbed when Lyle the raccoon gets sick, and his friends, seeing no improvement in his condition and desperate to help him, break Richard's rules to do so.

There are obvious allegorical strands here, and DeForge manipulates the changing situation masterfully through shadow and blacks, even via the design and shape of his characters. There are so many deft touches to revel in: the famous Julianne Napkin (there's a beautiful 3 panels where she sings and you can hear the quiet it elicits), Cynthia the blindly-devoted, evangelical frog, Richard's diamond-filled eyes and long coat, the question of how much autonomy and self you're willing to concede to be part of something. Sometimes when a cartoonist is consistently producing very good work, it becomes taken for granted a little, and I think DeForge perhaps suffers from that assumption of attention. 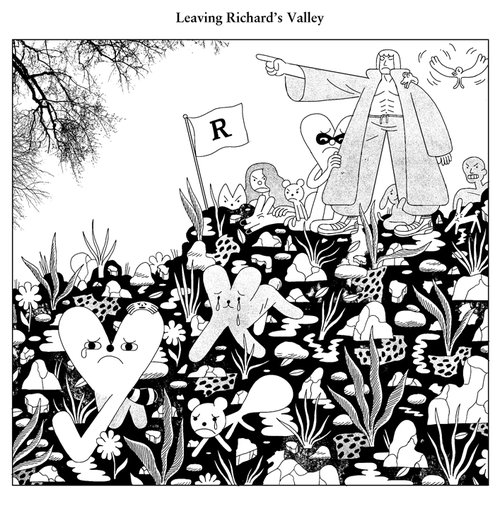 Patrick Crotty's Devil Maybe Cry is the final comic I'd like to point you towards. It's almost wrapped up, and I believe the plan is to serialise it online before Peow Studio consider publishing a complete print edition. The comic is a mix of things: a crossover of sorts that sees the return of the tiny Devil character featured in a previous Crotty mini-comic, Devil's Slice of Life, team up with small witch Bibi, a character from a 2014 comic from cartoonist Kris Mukai (which you can read in full here). The story picks up from the events of that comic and the kidnapping of Bibi's younger brother by Dante the demon-hunter from video-game Devil May Cry. And while that may sound confusing and haphazard, it actually does make sense if you come at it completely new! Crotty's someone whose work I like to keep up with if only for his art style, which usually does enough interesting things on its own to merit that attention.