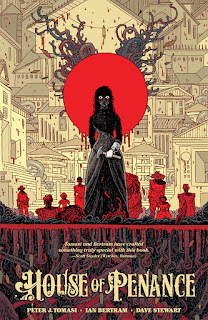 
It's likely that you're familiar with the legend of the Winchester 'mystery' House in some form: built in 1884 and stretching over 6 acres, 160 rooms and 7 stories, it was constructed under the orders of Sarah Winchester, widow of gun magnate William Wirt Winchester. The story of its baffling, seemingly haphazard design (Sarah served as the sole architect), and alleged unceasing, around-the-clock construction until her death on September 5, 1922, has provided fertile inspiration for novels, films, and games over the years. Its building was rumoured to be instigated by Sarah's visitation with a medium, who revealed a blood curse on the Winchester fortune, resulting in the restless spirits of her husband, young daughter, and all those who'd died at the hands of a Winchester rifle: spirits who needed to be housed and appeased. House of Penance is a further dramatisation of this story, with a focus on Sarah Winchester's grief and motivations.

The book joins Sarah in 1905, as she has her husband's and daughter's graves relocated from the family plot in Connecticut to the mansion's grounds. Construction is in full swing, and the practices of the place and its people are slowly revealed to the reader via the introduction of new workforce inductee Warren Peck. There is mad poetry in a house that is ever-built; where the sound of hammers is never allowed to quieten to keep Sarah's ghosts at bay, and these elements are amplified to horrific bent. The 'blood curse' is depicted visually as malevolent, snaking tendrils of red that invade and overwhelm, a metaphorical parallel of Sarah's struggles with trauma and depression. Thus the house and its rules/rituals of constant motion and noise are a coping mechanism: means of keeping the swarm of red from engulfing its inhabitants, whether that means tearing up a newly-completed floor in the dead of night, rearranging staircases that lead nowhere, or smashing mirrors through which the spirits attempt crossover entry.

Ian Bertram's art is the reason I picked up this book, and it does the bulk of the heavy lifting in establishing characters, tone, atmosphere, and more. Bertram is often compared to Frank Quitely in style: namely in the way he uses texture (wrinkled dash upon wrinkled dash) and draws figures, but where Quitely's figures are lean and almost spindly, with a creased, leathery quality, Bertram's can go bold through a thicker line or sheer density of texture. Here, that results in a fleshy, almost over-ripe quality- the sense of something waiting to burst out, that feeds the material well, giving new parlance to the ascription of having body. Holding back on the texture has equal effect, cleaner, clearer imagery lending the associated tenor. His panelling choices are diverse: thin, elongated wide panel portray the heat and constrictive climate; small, square boxes breakdown and emphasise the time of a dramatic moment, while switching to large, half-page panels of Sarah in the blackness of her bed, highlight her loneliness. Despite the unobtrusive yellow and orange 'BLAM BLAM' sfx, you never get a sense of sound in the same way. It's a shame, because as this neat ringing bell moment (below) with soundwaves emanating across panels, shows, it could have been well accomplished, and the story certainly provides unique opportunity to do so.

Stewart's colour approach, by contrast, is an afterthought: keep all else blandly conservative so the red can take center-stage. 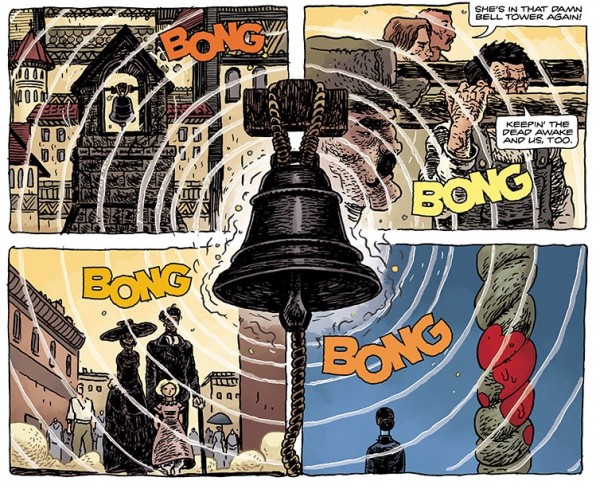 I enjoyed House of Penance a lot, not least because it led to me reading about the real Sarah Winchester who lived to the age of 82, and from the only existing photograph of her, looks like she knew exactly what kind of reactions she and her house drew. Yet there's no escaping that the story would benefit from being leaner. And much of that feeling is centred around the inclusion of the Warren Peck character. Peck's purpose in the story is two-fold: to function as the reader's stand in (the person we literally follow from the outside in), and to act as a mirror to Sarah and what she is experiencing, via his own haunted psyche. On both fronts, it's difficult not to view him as unnecessary. Why does the reader require a proxy via whom to understand Sarah? Peck's introduction shifts the focus from her as the central character to instead the person we, along with Peck, are watching. We are watching her trauma, her 'madness' accompanied by a male filter, when she could be presented directly to us with nothing in between. We could -should- be siding with her. The intention may be to reinforce, but instead what comes across is the idea that Sarah's pain and feelings are not valid, her actions not understood, unless shared and experienced by a man. It is Peck who sympathises, Peck who calms her, Peck who 'connects' to her, Peck who offers the possibility of romance, and so it is Peck who 'humanises' her. He even saves her from the dangerous designs of her own house (the house which is a stand-in for her mind, lest we forget). It's not only twaddle -considering this is supposed to be Sarah's story- but bogs down the book, dragging out what is essentially a tight tale for longer.

Sarah knows what she is doing, knows how it looks. She is lucid and commanding, and sharply aware of her sister's machinations to get her carted off to the asylum. It is helpful to have a side character for moments of exposition and  Sarah's right-hand man Murcer is apt to the role. What Sarah and her house offer, he explains, to the bloody men who work for her, is a particular self-imposed penance: they accept her judgement and recognise her need for salvation in their own; it's a way to confront their guilt and shame 'for embracing all that a gun has to offer'. And while it lasts, it's enough. 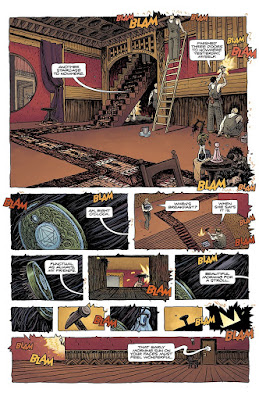 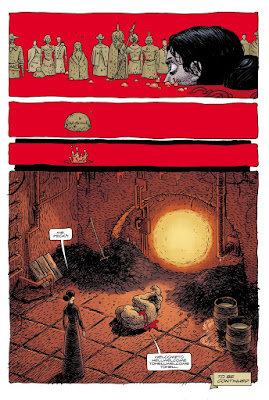