Delicious in Dungeon: the things we put in our mouth 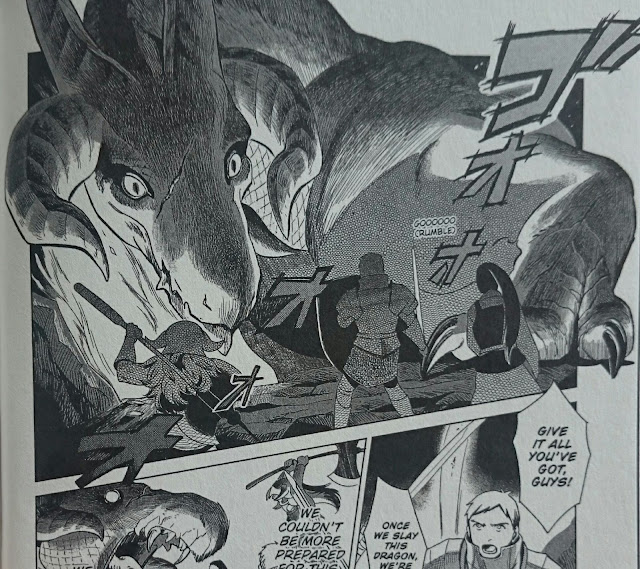 I had a lot of fun reading Ryoko Kui's Delicious in Dungeon recently. I've been eyeing it since Yen Press announced they'd be translating it, and then eyeing it some more after it released in May. My interest stemmed from the enthusiasm of friends who'd read it in Japanese (or, um, scanlations) but the concept was what made me dither: in a vast underground dungeon world, a group of adventurers run out of provisions and money. Instead of choosing to go back, they decide to forge ahead by making the creatures and monsters of the dungeon their food -a practice that isn't common and largely viewed with scepticism and disgust.

A quick explanation/justification of dungeon eating:

It's quite a (deliberately) silly idea, and I had qualms about how it'd be approached and executed, or the extent to which the whole book may be rpg game-related (i.e. too heavily referential for me to understand). Having read it, I'm starting to think Ryoko Kui is a genius. She sticks to a tight group of characters to whom she can devote time and flesh out a little: there's Laios, the leader/organiser whose sister the team have ostensibly set out to rescue, but who seems much more interested in eating dungeon critters, to the degree of fetishism... Marcille, the elf, who specialises in casting spells and magic, a reasonable being cast asunder by the sudden eagerness of those around her to start putting any manner of moving things in their mouth. Lastly, there's Chilchuk, a feet-on-the-ground sort of fellow who's an expert in disabling traps and locks, and Senshi, a dwarf the trio meet on the way who happens to be a dungeon cooking pioneer/outcast. The personalities and interactions between the four are what ground the work, with the mesh of the story where the group travel, chat and encounter obstacles handled like any other adventure comic.

The trick to dealing with a silly or ridiculous idea is to treat it as rote. There's got to be an element of conviction. So when it comes to the food, we get step-by step walk-throughs on how to cook a half-chicken half-snake basilisk, a diagram on the anatomy of slime (a bit like jellyfish), instructions on which mandrake limbs should be cooked which way. The general pitch of Delicious in Dungeon is comedic, and it is genuinely funny, but when it comes to the food Ryoko Kui gets serious. You end up believing that a colony of mollusks can grow an outer shell that looks like living armour, and that's quite a mean feat. Extreme/exotic eating has never held any fascination for me, yet there's something about the methodical nature of cooking combined with the creativity of dreamed-up creatures that's rather engrossing.


As you can see from the dragon picture heading this piece, Ryoko Kui can draw *pretty* well. Which always helps. I love when cartoonists can switch between a beautifully, thoroughly textured image to looser, simple line drawings. It's not only visually engrossing for the reader, but it offers more variety, in being able to switch between achieving tone and conveying mood and expression.

Is there a term for when pictures are laid out and labelled like this? I'm a sucker for it. I love detail. I think part of it is to do with packing so much into one space, too. 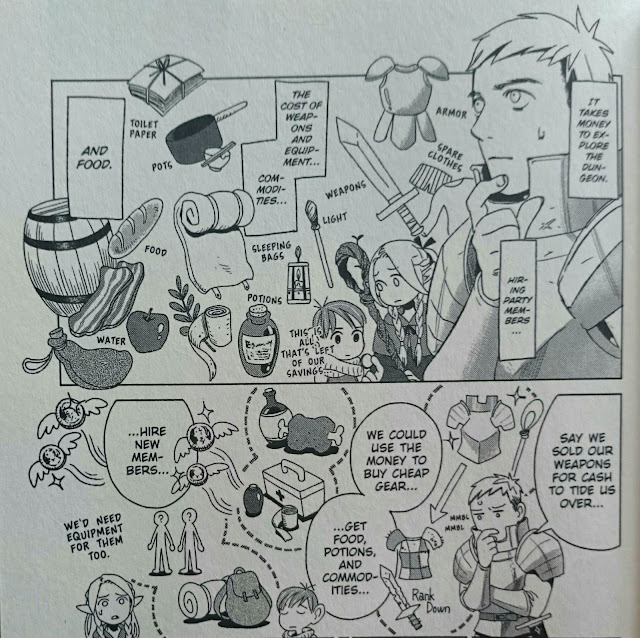 Not-so-hidden motivations. Laois has a problem... 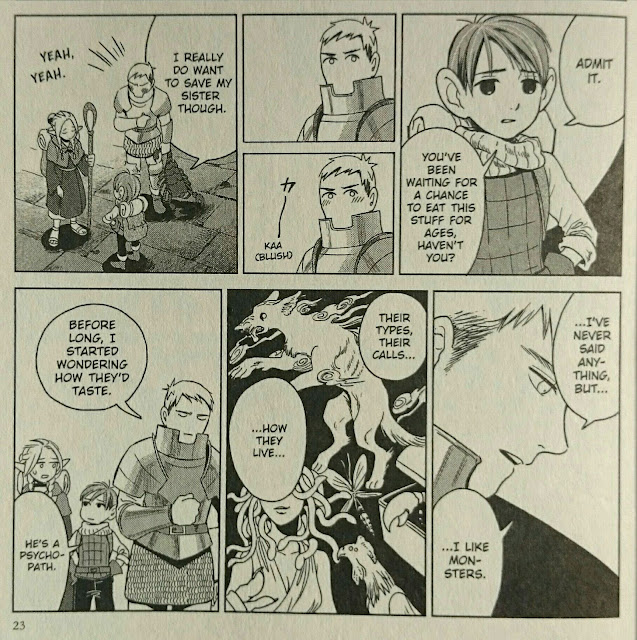 A real problem. The time to reveal your kinks is not when your friend has just been cut down from the twiny grasps of a man-eating plant. 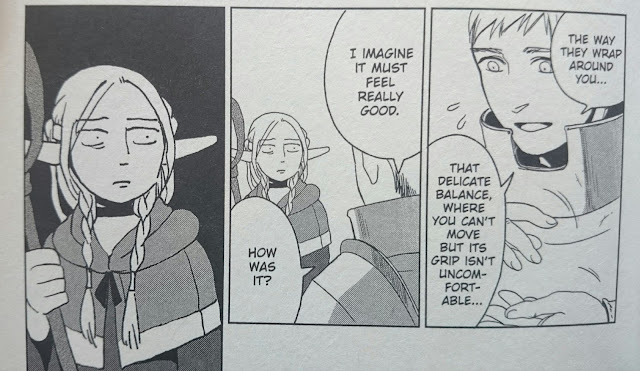 You know when you're really hungry and slowly everything begins to taken on edible potential; I like how meaty this mushroom looks, and the way its feet have mushroom heads, too! The humour of that mid-air running on these dainty little legs makes it. Yes, Laios does stick an axe into the mushroom in the very next panel. Nothing is going to keep that boy down. 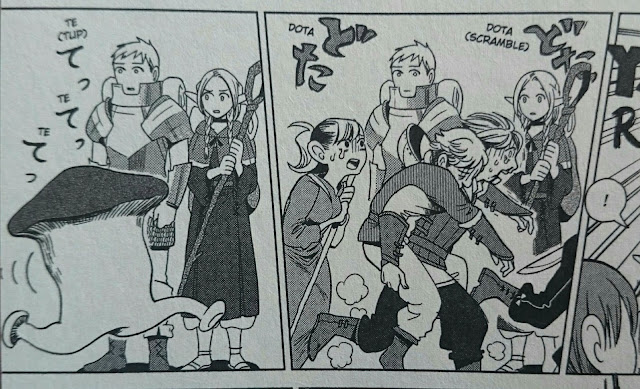 Delicious in Dungeon is such a fun book. I had a blast reading it. Fun and enjoyment can too often get lost as absolutely valid things to glean from art. I'm interested to see where it goes from here, in terms of developing what's quite a specific concept. It can continue in this vein of capturing funky magic monsters and doing breakdowns on how to cook them, but the novelty of that is limited and would get samey quick. There's the overarching story of the dungeon being a mysterious cursed land that needs freeing, which is only very briefly alluded to in this volume, and the rescue of Laios' sister, so there are directions in which it could expand or shift between. Looking forward to book 2, which is out later this month.

*This piece was originally written for my August 1-hour writing challenge on Patreon
Posted by Zainab at 08:46