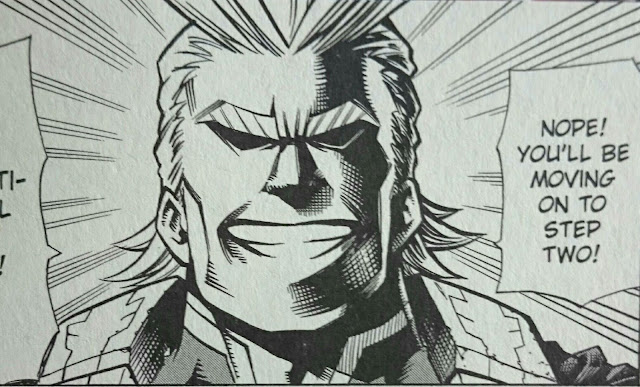 I started watching the My Hero Academia anime, swayed by the impassioned behest of my friend, Jamila. To cut a long story short (and brevity is one of the aims of this writing exercise), after a slow couple of opening episodes, I was hooked and whistled my way through the rest of the 2 series. I liked it a lot. Enough that the lure of pages from the comic from which it's adapted floating across my virtual path proved too strong to resist. What I want to discuss a little today is an aspect of that comic, namely the manner in which Kohei Horikoshi draws one of his main characters, All-Might, the number 1 superhero in the world. The following observations and analysis are based upon reading books 1 and 2 of the manga. 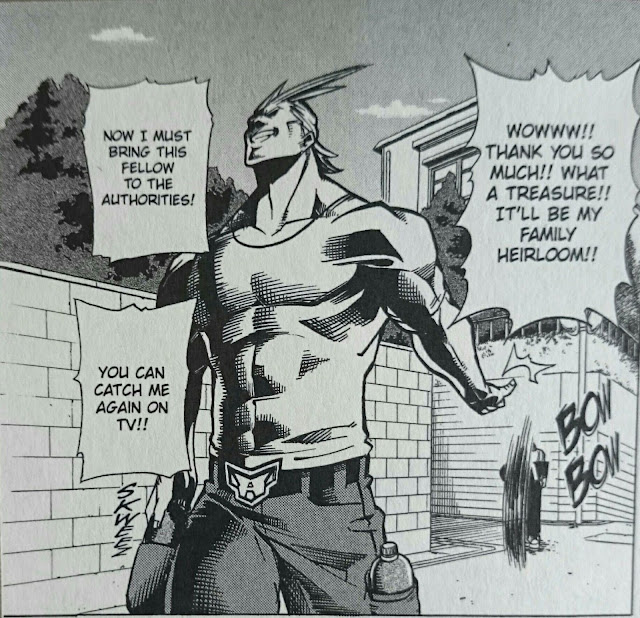 And here's All-Might in regular form: 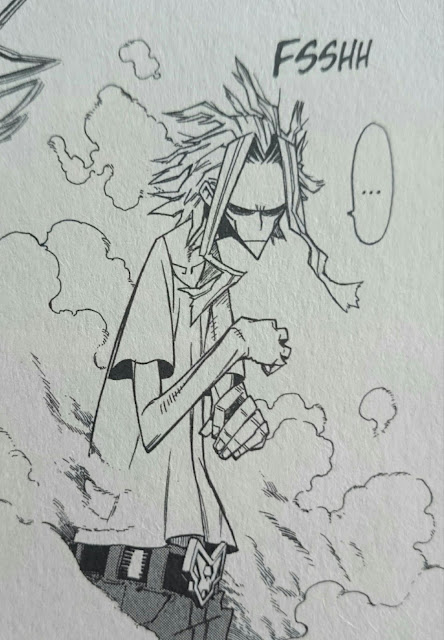 A side-by-side look at the transition: 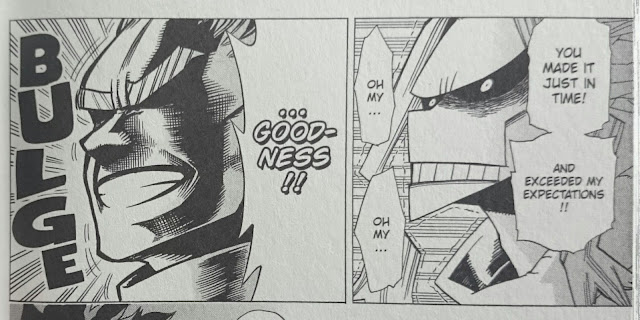 When he's in hero form, All Might is depicted almost as a caricature of a typical superhero. Kohei Horikoshi's lines become thicker, bolder. Increased, heavier texture and hatching are used to render his bulging physique. That exaggeration makes his presence undeniable. He's *there.* There's no missing him. Part of this stylistic choice is in keeping with the inherent humour of My Hero Academia but on a base level, it works simply to distinguish him from everyone else. In a world in which 80% of the population has some sort of special power, and superheroes are a norm, there has to be something immediately distinguishable about the number 1 hero. Bestowing All-Might with a unique, specific drawing style sets him apart from the pack.


What does it mean that All-Might is cartoony even in a cartoon? Why choose to portray him as superficially outrageous and ridiculous? What Kohei Horikoshi intends to do is subvert the glamour and cool traditionally associated with superheroes. He's a throwback ('who's this weird, cheerful old dude?' is the feedback Horikoshi says he got from his manga friends). The extreme cartoonishness reminds the reader that they're seeing a deliberate image, that the projected one-dimensionality isn't the only truth. It's a reflection of how All-Might is  viewed, and who/what he has to be as a hero. All-Might is as much a construction as he is real, a persona who exists via the ideas and expectations of others. He's shiny, larger than life, indefatigable, with the widest of never-wavering, rictus grins. So much of All Might -as with most public figures- is the meaning people ascribe to him, what they perceive him to be. The symbol of peace. This is something All Might is deeply aware of and what he strives to be: 'The reason I smile is to stave off the overwhelming pressure and fear I feel.' Comfort is derived in him visibly not being one of us: he is more.


Drawing him in this overt, pronounced style is a shorthand for conveying those ideas of a silver-age facsimile, an earnest pastiche, whilst underlining his significance. He may be corny, his costume may be outdated; his hair downright strange, but his sincerity and purpose are what make him. The distinction isn't purely physical but extends to his values. 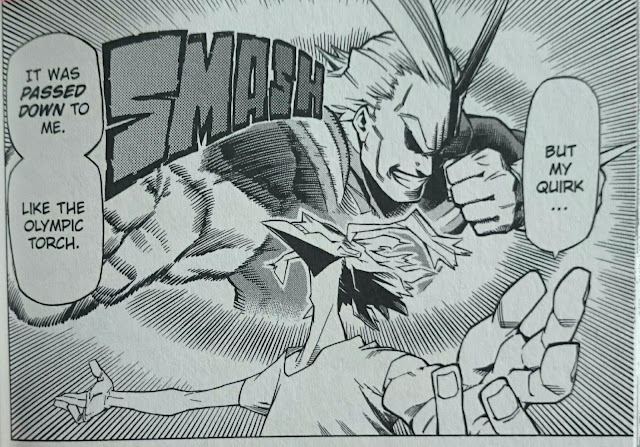 The other main function of this stylistic device is juxtaposition. It highlights instantly the difference between All-Might's 'normal' form and his hero form. We see how All-Might is able to become something more, but we also see the limitations and confines of it. Superheroes still generally tend to be aspirational even in their regular personas, still muscle-bound, still attractive, just a tad more obscured. With All-Might this isn't the case. He's not good-looking, he's gaunt, his clothes hang off him, his hair is limp and bedraggled. It's only his eyes that hint at depth and gravitas. When in his hero form, All-Might's eyes are never visible under his jutting brow and humongous eyebrows but in regular form, All-Might's eyes are his most impressive feature: burning pinpricks that give an indication of his personality and convictions. Yet there is no escaping the sense of dying lights...

Which brings us, finally, to death. Much of the story, and this presentation, seems geared towards All-Might's death. From the very first time we meet him he's hacking up copious amounts of blood, a by-product of a battle-wound that's only getting worse. And I think this is another facet to Horikoshi's depiction: All-Might is a discrepancy within these pages. He is not an object of permanence. What Horishoki is giving us is a journey from man to godliness -note the connotations of the 'all mighty', his power 'one-for-all'(as much an accumulated spiritual network that provides 'strength') - to transcendence. All-Might will pass on, and the more indelible an impression he leaves, the greater the impact of his loss and the absence of that most vibrant, full of pomp figure. 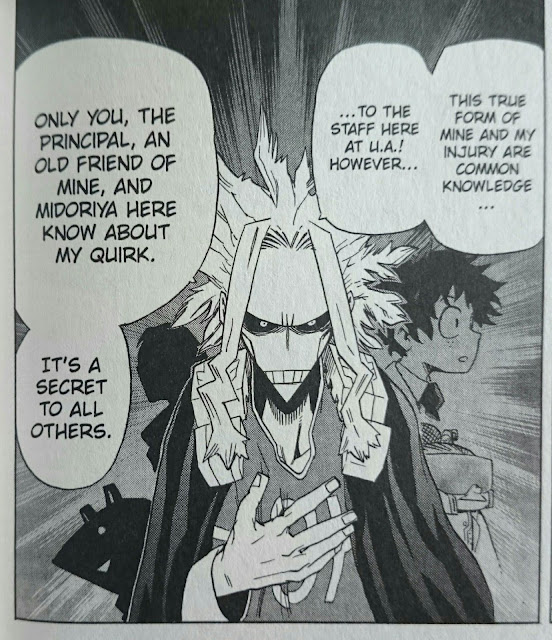 *This piece was originally written for my August 1-hour writing challenge on Patreon
Posted by Zainab at 07:39

Email ThisBlogThis!Share to TwitterShare to FacebookShare to Pinterest
Labels: All Might, Kohei Horikoshi, manga, My Hero Academia, Viz