David Weisner's and Donna Jo Napoli's Fish Girl is a book that took me by surprise recently. I bought it as a fan of Weisner's excellent picture books, excited by the prospect of him working on a longer-length comic. What I knew of it was gleaned from the publishers' brief synopsis: a young mermaid in a seaside attraction befriends a human girl and longs to have the same freedom. Yet Fish Girl is a much sharper, more thoughtful book than that blurb would have you believe. It is a story of abuse, power dynamics, and control.

Kept in a seaside house of attractions, Fish Girl looks up to and loves the man she knows as 'Neptune'. The whole house is rigged up as a gigantic aquarium and it's Fish Girl's job to swim around amongst the other creatures and foliage providing the paying visitors only enough glimpses so as to keep her existence both viable and contentious. Neptune puts on shows for his customers in which he regales them with tales of the sea, as water rises and moves at the behest of his sceptre. He refers to the house as his kingdom and Fish Girl as his treasure. Making herself known to anyone would put her in great danger, warns Neptune, leading to experiments, dissection, and worst of all- separation. Fish Girl believes him. She believes him to be king. 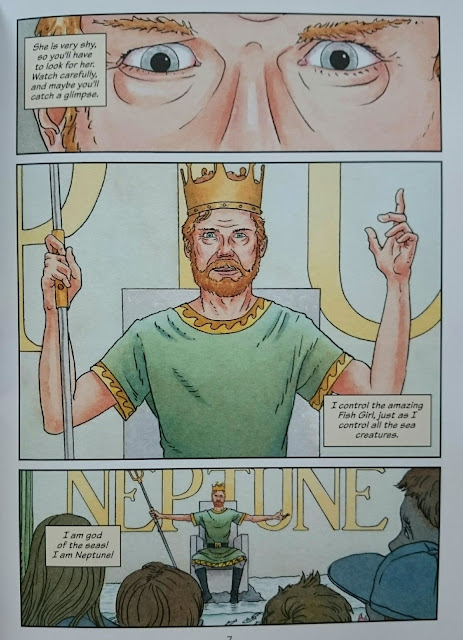 What I appreciated most about the book was its clarity. It doesn't mince language or themes, a facet that's doubly important when taking into consideration the young audience this is aimed at. It's not an allegory but a straightforward presentation of an abusive relationship. Using the lens of a mermaid who sheds the constrictive identity (quite literally 'special' by being a fantastical creature) placed upon her, who breaks free from her scales, growing legs and learning to walk and stand doesn't water down that portrayal. The man who calls himself Neptune sees Fish Girl as his property, something he owns, 'You are mine. My treasure. I'm the one who cares for you.' He simultaneously demeans and diminishes her: 'they'll [other people] be repulsed by you,' and then frames himself as the good guy, the sole person willing to care, the only one who sees how special she is, 'you're nothing like them.' Through controlling how she feels about herself, he controls her. He manipulates her emotions, peddling a you-and-me-against-the-world-narrative 'we belong together,' telling her her survival depends on him. Why wouldn't Fish Girl, who has been with him since she was a baby, who doesn't even know what 'the world' looks like, has known nothing beyond the walls of the aquarium, trust him? 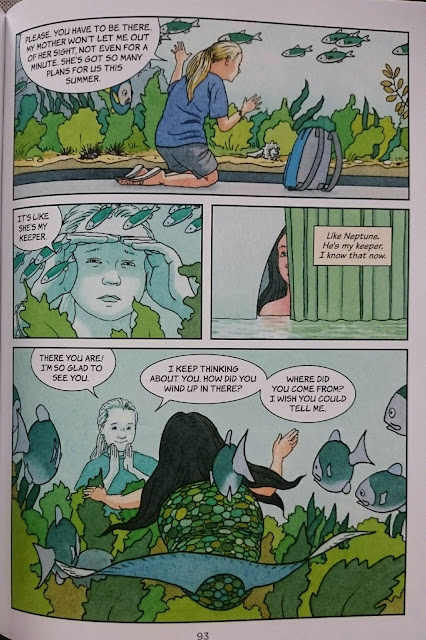 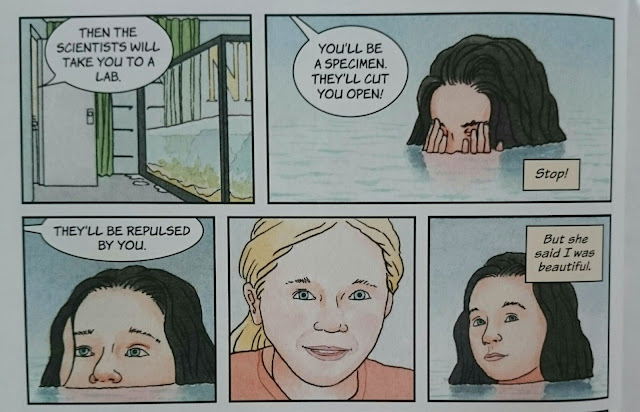 But one day, a human girl catches Fish Girl unaware as she's lost in thought and talks to her. Although Fish Girl is voiceless, the two are able to communicate and strike up a secret friendship that leads her to question much of what she thought to be true. This girl, the first human she's interacted with besides Neptune and she is perfectly nice. If he was lying about the nature of people, what else was he lying about? She begins to become aware of the physical and mental confines in which she's caged: 'My air. My food. He controls my world.' 'When he's happy, he leaves me alone.' She determines to learn more. Napoli and Weisner remain firmly, remarkably rooted throughout: even when Fish Girl makes her way into the human world one night, she is not safe from the exploitative overtures of men. The ultimate line is that she have the freedom and agency to choose how she wants to live, what she wants to do, and who she wants to be. That she be in control of herself.

Weisner's art tends to have this rather static quality to it that serves the generally surreal direction of his work well. The distilling of movement forces you to spend time looking. Here, it's a steady, unwavering hand giving the reader an unblinking lucidity, the tone of which never gets frantic. It works well, too, in a sense of containment, of slow introspection the pace of which he's able to dictate via panelling choices as the story crescendos and concludes.

*This piece was originally written for my August 1-hour writing challenge on Patreon
Posted by Zainab at 09:16