Shiva: to protect or destroy?

Siuil, a Run: The Girl from the Other Side by Nagabe [Seven Seas]

Shiva is a young girl living in an abandoned, woodland village in this opening volume of Nagabe's masterfully paced folk-fantasy. Her sole companion is a tall, black, meticulously-dressed creature, whom she addresses as 'teacher,' and who serves as Shiva's guardian. Semi-humanoid in shape, with a head that is a cross between bird and ram, a beak that is not a beak; long, curling elegant horns, fur, and a tail, Teacher and Shiva are close (despite their coming together indicated to have been a fairly recent turn of events), each unperturbed by the other. Due to unspecified reasons, the two are forbidden to touch. Shiva appears unaware of much, apart from that used to have an aunt, whose fate is unclear, and whose return she eagerly awaits although Teacher knows such a turn of events is unlikely... 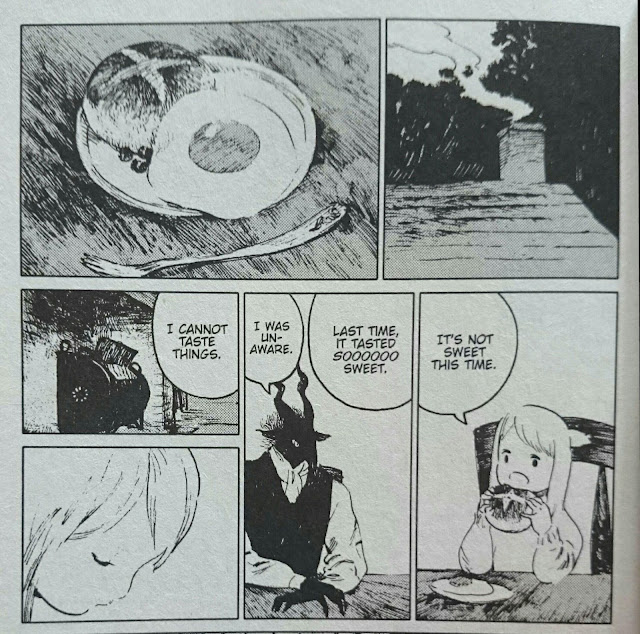 More is learnt of this curious situation via Teacher's thoughts, and the conversations of a group of soldiers patrolling the woods. It seems a curse or disease of some kind has ravaged the land. Areas have been divided into safe and no-go zones: the inside and the outside. The curse changes people, a physical transformation, and those changed become 'outsiders' who are hunted down and killed -purportedly to stop the spread of the disease. Fear rules rampant as soldiers slaughter anyone even suspected of carrying the curse. This, then, is why the village is empty. Those who are not dead have fled. Yet these nuggets of information are slippery, one-sided, and not expansive enough to provide answers. How did the curse come about? If Shiva is a carrier, why does Teacher -an apparent outsider- strictly enforce the 'no contact' rule? What kind of powers do the outsiders have? Who are they? Can they truly transform others by a simple touch? What is it the king and his soldiers are really afraid of? These questions aren't frustrating, but a result of Nagabe successfully siphoning story to sow intrigue and investment. 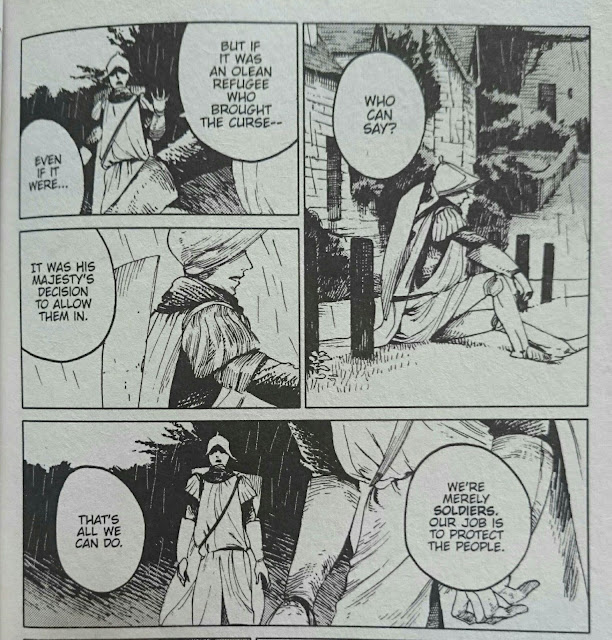 While the odd-couple pairing of the inky, imposing, nightmare-fodder figure and young, innocent child may be what catches the superficial eye, Nagabe demonstrates a deft touch in characterisation, rooting it in activity, situation, and the interpersonal. We spend time with Shiva and Teacher both separately and together, becoming familiar with each as individuals, and of their relationship. With no physical contact allowed, Nagabe shows the two's closeness via gestures, actions: Shiva making a crown of flowers for Teacher and placing it carefully on their head. Holding either side of an old umbrella for support when Shiva is hurt, Teacher unable to carry her. There's a quiet, gentle ambience enhanced by the woodland setting, and the isolation of the characters, although this sense of tranquility seems false, destined to not last. Nagabe's fine lines amplify that feeling, treading delicate, sharp, ominous. Sparser pages give way to sudden fuller, detailed backgrounds with brushier inks, at times an uneven note in the book, possibly borne from the constraints of serialisation, but also offering a heightened contrast, specifically in employing blank space as a conduit for drama and tension.

One of the most fulfilling aspects of Siuil is this conveyance of comics as language, of words and pictures as unified text. Take, for example, the 3 pages below. Nagabe splits the pages into 2 large panels to slow down time, and to emphasise the pivotal nature of what we're seeing: both the soldier drawing the arrow, lining it up, and Shiva's reaction. The panels are sparse with no background- full focus is on the figures. The additional texture on the arrowhead from an angle where it's in the reader's face makes it all the more real, more dramatic. 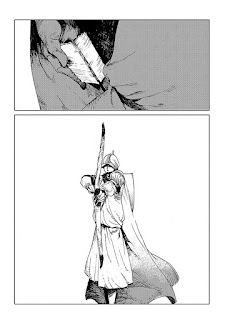 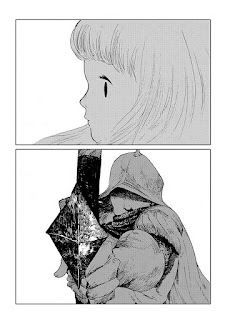 Panels and sequences are utilised like this thoroughly: a splash page filled with the close-up of a single, shocked eye and the catalytic reflected image. A tight, close-up in which Teacher's hand clutches silently at grass and flowers in pain, followed by a 3-panel sequence of Shiva reaching out a comforting hand, hesitating, and then drawing back. A split-panel of Teacher's head indicates a momentary 'in two minds' indecision over whether to tell Shiva the truth about her auntie. Shadows of soldiers helmets fall so that their eyes are rarely visible, indicating a blind following and a lack of humanity. Even something such as size difference is used to communicate narrative, Nagabe contrasting the safe, comfortable interactions of Shiva and Teacher's (crouching, reaching with a stool) with the looming, elongated body language of the soldiers from the perspective of a fallen Shiva as they tower over her.

It's been a while since I loved a book as unequivocally as I loved The Girl from the Other Side, and I'm eager to see where it goes next.

*This piece was originally written for my August 1-hour writing challenge on Patreon
Posted by Zainab at 09:00