Snapshot thoughts: 'You & A Bike & A Road' by Eleanor Davis

So, today I have an hour to tell you my thoughts on Eleanor Davis' You & A Bike & A Road.' Here's what I want you to know:

1) This book is about a solo bike journey Davis undertook from her parents home in Tuscon, Arizona to her own home in Athens, Georgia in 2016. There are a slew of reasons for setting out on the bike trip: it's something she wants to do, and she and her husband have been thinking of starting a family soon so now seems like an opportune time, but also her mental health is at a low ebb and the bike provides a release of sorts. On the bike she feels okay. 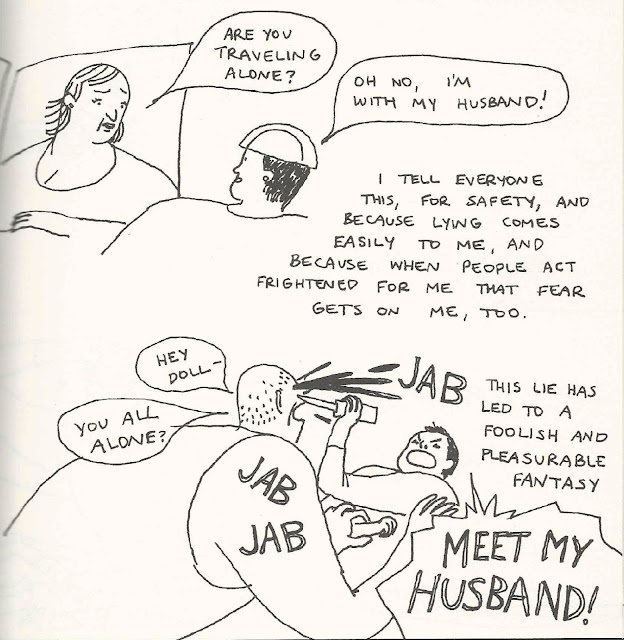 2) I read this while in hospital, lying down on a sofa in my dressing gown whiling away the 7-hour pre-surgery wait time. I once said on a panel that my mood affects how I experience a book (which I think people found a bit odd) but it's something I stand by. It makes sense that where you're at -mentally and physically- has on impact on the way you interact with things. Hospitals are one of those liminal, strange places where reality seems thinner, and that, combined with my nerves and apprehension made me open to the book in a specific way. Particularly as much of it is about the limits of the body; the tension between the mind and matter. Yet I found it affirming. I was comforted in sharing the experiences of someone else who was struggling.

3) Davis' cartooning is incredibly good. Writing about her previously, I've called it 'natural' 'organic' 'flowing.' Fundamentally, it comes across as effortless. I don't mean that there isn't work involved, but even here, where you can see rubbings and drawn over lines (Davis created these comics on the go), it seems seamless in how it's put together.  There's an ease to it. It's as if she thinks in cartoon form and then that's what comes out of her pen. Some people speak a language more fluently than others. Davis is at the level where she's so good you can't tell if it's her native tongue. What I am most impressed by is her ability to succinctly convey exactly what she wants. Nothing extra. What she wants to say, what she wants to show you, is there on the page. I envy that coherence. To be able to not only express yourself, but to do so whilst being engaging, intelligent, and thoughtful is special.

4) I relate to the notion of motion keeping your monsters at bay. Move, move, move, and they can't getcha. Doing requires all your focus.

5) I like the full-page crowd scenes a lot. The smudgy closeness of a pencil is the best at bringing the reader into an image. The bustling way in which Davis fills a page is deeply appealing. There's a real geniality to this book, to the cartooning; to Davis' voice and her questioning. 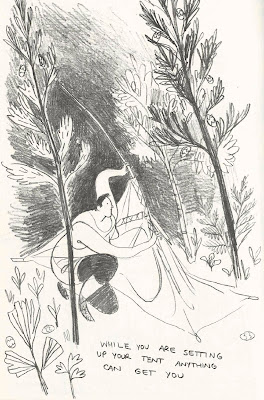 6) One of the aspects that resonated deeply with me was the idea of failure, or giving up. We're taught to continue, to persevere. Seeing things through as a test -and testament- of character. No matter if it's at's the expense of your health. No matter the strain or toll. When something is at the point of causing you greater harm than it is benefit, it is okay to stop. It is okay to stop for as little a reason because you want to stop. Davis does not complete her bike journey: her knees, fragile and flaring up throughout, can't take anymore. She doesn't want to cause her body damage for the sake of completing an arbitrary goal, instead choosing to reflect on all she has achieved, on what she's gained.

7) At various points in her journey, Davis is helped by complete strangers who allow her to stay at their home -sometimes for days on end- help fix her bike, give her advice, words of encouragement. 'Meet some strangers. Get to know them and they get to know you. Now they are your people.' I'm struck by this. These parts of the story are what seem most fictional to me. I know, as brown, visibly Muslim woman, navigating life in a 'western' country, this could never be my experience. I am struck by how something as simple as a bike trek can offer 2 human beings such varying possibilities. Weird to consider that the best of what people have to offer is closed off to you by their worst. What it would be like to move through the world free of larger preconceptions and prejudice.

8) This book was one of the best things I've read this year.

*This piece was originally written for my August 1-hour writing challenge on Patreon
Posted by Zainab at 18:00