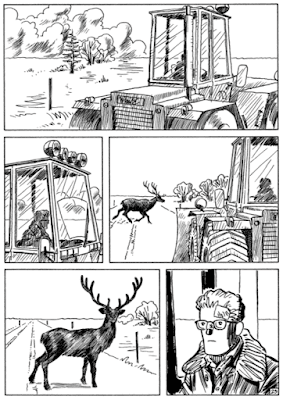 Pierre Wazem's and Antoin Aubin's Snow Day is a small, interesting comic. A quiet, corrupt town. A sheriff tired of looking the other way. And snow. Interminable snow.

The specifics are not clarified, but the broadstrokes suggest that the constant harsh weather coupled with the isolated location of the town mean its residents are dependent on the income and business provided by Mr Ross' factory. Conditions, 'accidents,' assault, are all overlooked to ensure the factory is kept running. Until one day, Spencer, the sheriff appointed by the dodgy mayor as a glorified babysitter, decides he's had enough. All this is in the background, a tropey-framework to get the reader there, if you will. Snow Day opens with an incident already having occurred, and Spencer dealing with the fallout of his decision, butting heads with the town's forces.

The thing that appealed to most about Snow Day is its scope. It's not about winning or losing, taking the bad guy down but about a moment in which a man tires of not being able to respect himself anymore. One man who thinks himself of as good, as doing the right thing, having the right values, and yet somehow finds himself resigned, downtrodden, actively complicit. Spencer is uncomfortable with himself. With how easily he has become comfortable with what goes on around him; how easily he has become comfortable in his own lack of response and acceptance of 'the way things are.' There's a selfishness in his sudden need to reclaim who he is, almost, but the good kind.

I like, too, that Spencer's intervention isn't presented as ultimate, even as he feels temporary satisfaction in having finally shown some spine. It's not endgame. It's one thing he did this one day. Any repercussions, any effect it may have, any possibility for change is left up in the air. That we don't get to see. But we do get to see people ground down by resentment from being exploited by those more powerful combined with the resentment of disliking themselves for not having the courage to do anything about it. That's a nook from which circumstances rarely alter. 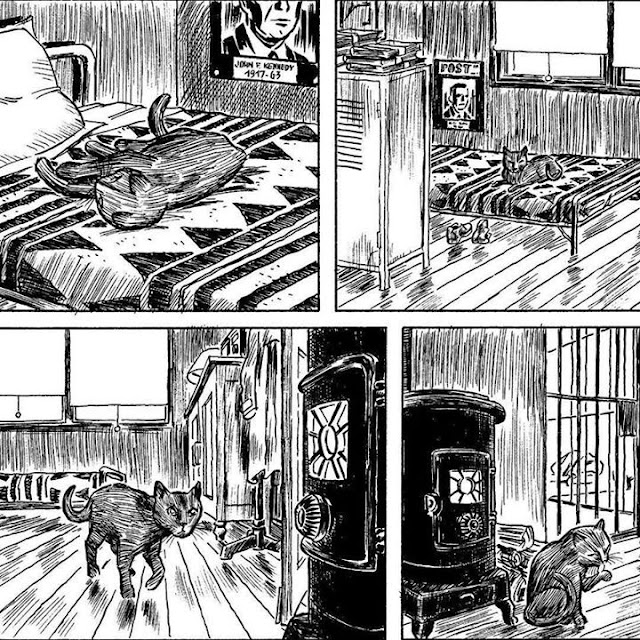 43 of Snow Day's 112 pages are silent. Aubin uses passages of 4-6 pages here and there to give a sense of place, to set a scene, to imbue contemplation, frustration, deliberation. It's Aubin who imbues life, measure, stillness. His black and white inks serve to highlight the bleak, beautiful nature of the town, moving from stark and fine, to dense and gnarly. The manner in which he's able to render both cold and warmth with his lines and brushes is pretty special. There's a flashback sequence in which a man narrates the instigating incident to Spencer's ex-girlfriend, charmingly done in a naive-style pen scrawl that serves as his inebriated recollection of events.

Snow Day is an entertaining book, lovely to look at, which leaves you with thinking a little.

*This piece was originally written for my August 1-hour writing challenge on Patreon
Posted by Zainab at 14:40